Birthday and farewell again to Tim

A year ago, both Daniel and Tim were home for my birthday. It was Dan's last Sunday in Cyprus for two years, and we celebrated by spending the day in Troodos. It was a wonderful birthday.

Yesterday I had another birthday. They seem to come round every year. It was also Easter Monday in the Eastern calendar, which means that it was a public holiday in Cyprus. As was Friday. That meant that a few parcels and cards I'd been told to expect from the UK had not arrived, since the Post Office was closed from Thursday afternoon until (probably) today. That's OK. I actually quite like having things to open after my birthday.

More significantly, perhaps, I was once again extremely tired. Greek Orthodox celebrations of Easter are extensive. They take it much more seriously than we do in the UK, with fireworks and bonfires and parties, and then - on Sunday - barbecues, after fasting from meat during Holy Week, even if they didn't follow the stricter fast for the whole of Lent. Easter Monday then seems to be a day to sleep, but since I get woken by Sophia around 6am each morning, that was no good for me.

Still, by the time I'd had my shower and breakfast, I felt almost human. Richard and Tim got up around 9am and I had a few parcels and cards to open, which was very nice. Tim and Richard took some photos of me, most of which were remarkably unflattering... but this one of me with Richard wasn't too bad: 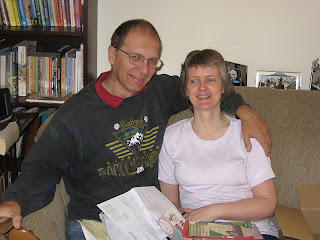 Then I realised I hadn't taken many of Tim in the 12 days he had been in Cyprus, so I took a few which were much better than the ones of me: 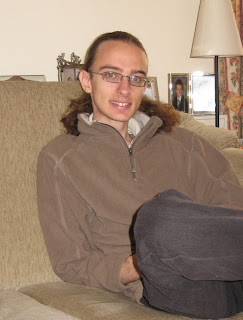 Since Tim was home, he made me a cake, using some techniques he learned from Richard's mother, and also some advice from other friends here in Cyprus not to use self-raising flour (since the quality here is terrible) but plain flour with baking powder. It turned out extremely well: 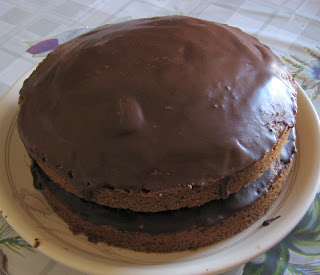 A friend arrived Sunday evening to stay in our guest flat, so she was with us for lunch, which was nice. In the afternoon, Tim spent some time with the cats. Here he is with Sophia: 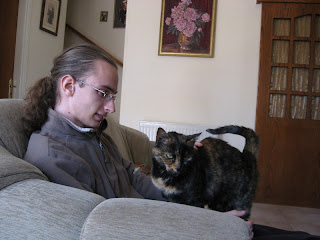 .. and managed to check in online, at the Cyprus Airways site. That meant he didn't need to be at the airport until 4.30pm, an hour before his flight was due. He packed his main luggage in the morning, including several theology books that he wanted to take back to Birmingham, and then collected other bits and pieces for his hand luggage later on. We don't THINK he forgot anything, but may well discover something in the next few days.

The airport is only about five minutes' drive away, which is a good thing considering how often we go there: 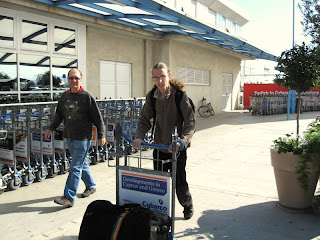 .. and since I've taken so many pictures of Daniel at the airport, I thought I'd better take a few more of Tim too: 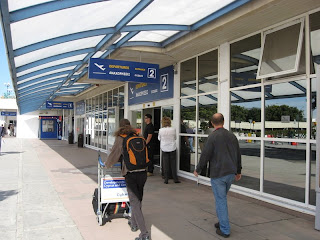 It wasn't as traumatic as saying goodbye to Tim last Summer, but I still had a little weep after we'd left him. I don't suppose it will ever become easy. Only four months till we see him again, though, so not as bad as last time, when we knew we wouldn't see him for eight months.

I was in bed and asleep by about 9.30 last night. We'd asked Tim to send text messages to let us know he'd got safely on the National Express coach, and when he eventually got back to my mother's house, where he lives. He sent three text messages in all. I did wake briefly each time Richard's phone bleeped, and stayed awake long enough to hear him read the messages. All went well, and to my relief I fell straight asleep again.

Sophia let me sleep until 6.30am this morning, so I feel much more refreshed.
Posted by Sue at 15:51

Belated Birthday Wishes Sue. Thanks for the blogging, it helps us stay in touch with Cyprus.

Happy Birthday also Sue. I remember vividly your Troodos Birthday Blog last year. Watching the Cyprus webcam the snow is disappreaing rapidly but has lasted much later this year due to more snow. Hope that means more water for you. Tim looks great...he's certainly maturing. Thanks for your blog!

It was our son Jethro's birthday on Sunday, and his friends said he must make a cake for them, so he did, and it looked just like the one in your picture!