Plants and rain in Cyprus

Yesterday, the forecast was for high gusts and wind, so - for once - Richard didn't go sailing.

Instead, we decided to do a bit of gardening. If that's the word. We don't have any garden as such, but we do have a patio in front of our guest flat, where we keep a good number of plants in pots. We also have a small number of plants outside the front door of the main part of the house, at the top of the outside stairs.

We knew that the two hibiscus, which had never done very well, had finally given up altogether a few weeks ago after their pots became waterlogged. We could see that our citrus trees were looking straggly, and needed pruning, and I also knew that I should replace the top inch or two of soil around them with some fresh compost.

Then there was a long planter which has lain empty for some months, and a couple of others which were away in cupboards. Oh, and three plants which Richard gave me for Christmas, which were still in their original small pots and needed to be planted properly.

And I had some birthday money.

So we went to the Cosmea Garden Centre, which is only five minutes away from where we live, and browsed. I can be very indecisive in garden centres, but this time I found what I wanted fairly quickly. We also bought a couple of bags of mixed compost, and a bag of little stones for water preservation in the summer, and some insecticide after asking for advice on aphids. Unfortunately we don't seem to have ladybirds here, so the only way to protect our plants seems to be to spray them.

When we got back from the shop, around 11.30am, the sun was directly on the patio. So we decided to wait until the afternoon.

At two o'clock, I procrastinated.

At three o'clock, I noticed that the sky was grey, and we even had a few spots of rain. When they stopped, I hurried down to deal with the plants. It rained a bit more, and then it stopped.

Richard transplanted the two cyclamen and yellow kalanchoe at the top of the stairs out of their little pots and into their planter, and they look better already: 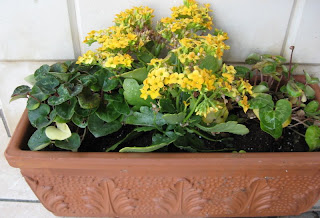 He pruned the orange tree, then I dug out the top inch or so of old soil and replaced it with fresh compost and some white stones to retain moisture in the summer: 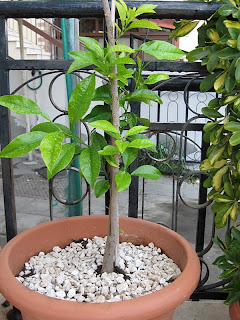 We did the same with the lemon tree. They both look much better. The only problem is that we've probably left it too late... they've already blossomed this year. There are one or two tiny fruit that may or may not remain; it would be nice if we had more than one of each. 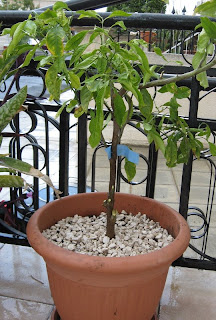 It rained some more, and we took shelter, then it stopped.

I found the two unused planters, and filled them with old stones and soil from the citrus plants, then some fresh compost near the top. Then I planted an antirrhinum and a couple of petunias into each one - both bedding plants that tend to do well in Cyprus, although in previous years we've put them out around November rather than April. But at least they should last a few months before it gets too hot, and the antirrhinums may self-seed. 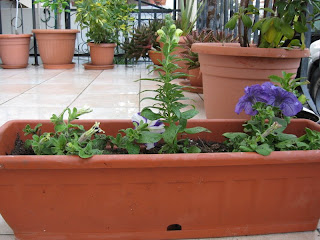 We couldn't find anywhere obvious to put them (this is perhaps why we hadn't used them previously...) so I put them at right-angles to the rest of the plants, near the few steps that go up to the patio from the street. 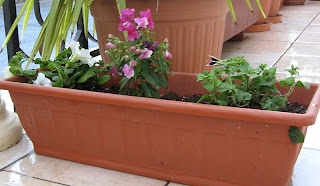 To replace the two hibiscus, I bought a fuchsia, and another plant whose name begins with C. Unfortunately, I had forgotten its name by the time we got home, and it didn't have a label. I have no idea whether the fuchsia will survive the long, hot summers of Cyprus. I haven't seen them here before. But the other plant looks fairly hardy: 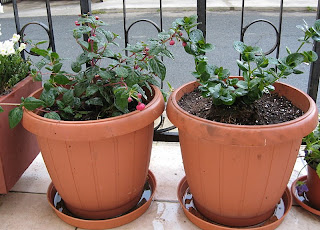 In my enthusiasm, I had chosen 12 bedding plants, including three pansies. I hadn't thought about exactly where they would all go. Three more petunias went in the planter which had no plants, and I then found three medium sized individual pots for the pansies.

By the time we had finished, the patio looked a dreadful mess with soil and footprints and general dirt all over it, made worse by the light rain that had interrupted our labours every so often. It was too wet to sweep up, and there was far too much for a mop and bucket.

So, as the water shortage is nowhere near as severe as it was a year ago (there is now, I'm told, over 30% of capacity in the reservoirs) we did something very Cypriot: got out the hosepipe, and washed it down. Not as thoroughly as our neighbours would, and with my conscience pricking. But it did get it clean pretty quickly. Then I got out the mop and bucket to do the last of it, and the outside stairs which by then had gathered rather a lot of muddy footprints too.

I put the mop and bucket away. I took the photos shown above. Then I heard a crack of thunder, and hurried inside.

For the next twenty minutes or so, we had pouring rain. Enough that the roof leaked a little, and certainly more than enough to water our new plants in very effectively. Perfect timing, really.
Posted by Sue at 22:14

You had quite a perfect day in my opinion. I say this because I would love to have the pots and flowers to tend to.
I am limited in what I can physically do so don't attempt too much.
I will get pots already planted and try to keep them pretty!!!
Betty G

I'd like to do something similar here soon, now that we are staying above freezing both night and day.