I wrote a long post about our short visit to the beach on Tuesday.

I wasn't sure when we'd get there again. Richard had to travel to Jordan on Wednesday, and was returning Friday. I did know of two beach scheduled beach events to which we had been invited, but wasn't sure about going alone... and would need a lift, as I don't drive.

After some deliberation, I decided I'd like to go to the gathering of Larnaka home educators on Wednesday, at the main strip of McKenzy Beach. Not my favourite place to go - it's too crowded, usually, and very noisy with incoming planes - but I thought it could be fun.

I was easily able to find someone who could take me, and enjoyed chatting to other mothers while half watching the various children (ten older ones, from 13 down to almost 4) playing, mostly co-operatively without more than a few minor squabbles. I do like the way that home educated children tend to get along with each other, at least most of the time.

There were also two crawling babies, who mostly played nearby. Helen, my ten month old little friend, went into the water with me for a while:


A little later, slightly to my surprise, she fell asleep on me. She hasn't done that before.

On Thursday, I didn't expect to see anyone. But had a phone call shortly before noon, from Sheila (mother of Helen, and a few others...) who, incidentally, also has a blog about living in Cyprus. Her son Jacob had been in the two-week summer school for Antidote Theatre, and wondered if I'd like to see the show the children were doing at the end.

My natural response to impromptu invitations or suggestions is often to say 'no thanks', and then regret it later. So after hesitating a moment, I said yes. After the show they asked me to lunch... that didn't take much persuasion. Then, when I was about to leave (they only live a few minutes' walk away from us), asked if I would like to go to Pervolia beach with them in the evening. I was pleased that I managed to say a third 'yes' in one day!

Pervolia beach is further away, on the outskirts of Larnaka, but has the advantage of some shade, and also quite a few stones, meaning that picnics and mats don't get so sandy.

I remembered to take photos on Thursday, too. I think this is probably my favourite - Helen, pondering the water having crawled down the beach in just a nappy: 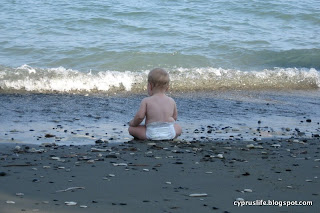 Here she is again, a little later, thoughtfully chewing on a large stone after changing into her sparkly black swimsuit: 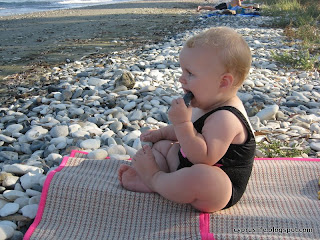 Here are Katie and Lukas playing in the water - it really was delightfully warm: 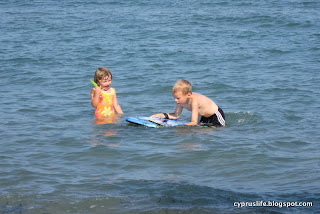 .. and Jacob, having buried his arms in the sand, doing a headstand (with a little assistance): 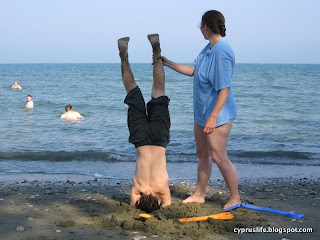 Richard came back from Jordan fairly early Friday morning. He took a couple of youngsters out for a sailing lesson in the morning, and still managed to get home from the office by about 4.30pm so we could go to yet another beach event - this time a gathering of some of the non-congregation-affiliated house/cell group which we are now part of. It only meets every other week, and was meeting near the place where Richard and I went on our own on Tuesday.

Very enjoyable, again, but I didn't remember to take any photos.

So, after not going to the beach at all for, probably, about ten months... I had four beach evenings in a row this week.
Posted by Sue at 16:46