Out of Cyprus, Day Six

On Tuesday, we had lunch with a friend whom I've known since 1971, since we were at secondary school together. She works near Birmingham University, so we arranged to meet on the steps of the main library. Despite my having attended university at Birmingham for three years, in the early 1980s, I had no memory at all of where to find the library. Fortunately, Richard knew exactly where it was and led us straight there from the only car park we could find that didn't require a permit. 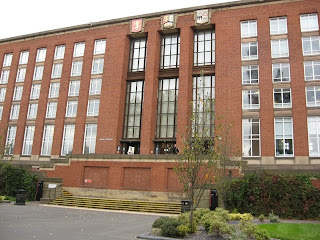 We think of Birmingham as being one of the old red-brick universities. It certainly has a lot of red bricks, but in fact was only established 100 years ago.

Naturally I took a photo of Old Joe, the clock tower: 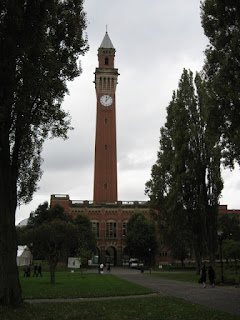 We met our friend at 12.15, and she took us to a newly-opened Starbucks in the Muirhead Tower. She treated is to sandwiches and coffee, and we even found some comfortable seats to sit and chat: 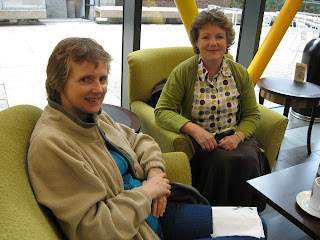 Since there's no evidence from that photo to show where we were, we opted for a mug-shot too: 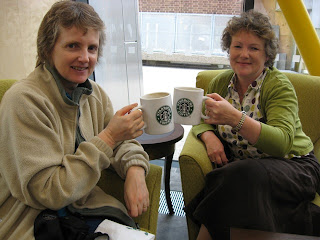 Our friend had to return to work after all too short a time, so Richard and I decided to go into Northfield for a while. It used to be one of our favourite shopping centres, and although I'm not a fan of shopping in general, I felt as if we should at least look at a few more shops while we're here.

The indoor shopping centre looked much the same (although I'm sure it used to be called the Grosvenor centre... pronounced 'Grove-ner').. except for road-works outside: 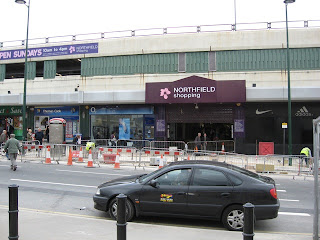 In the main shopping street there were clearly moves to increase and improve the pedestrian areas. It reminded me a bit of the road works in Larnaka, except that the area was properly fenced off (a good move), and the workers were all wearing hard hats (which seemed a bit pointless, but is no doubt a safety requirement): 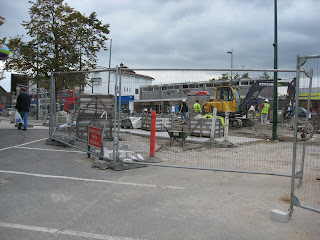 The shops, as elsewhere, were looking rather run-down. There were at least two 'cash converter' places, and several 'poundland' or 'priceless' or similar inexpensive shops attracting people hoping for bargains. We even saw a pawnbroker, which I don't ever recall seeing before. But there were plenty of places that were boarded up, and even some of the charity shops seem to have disappeared. 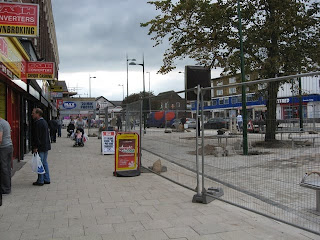 Still, we visited Holland and Barrett in the indoor centre, and also WH Smiths. And the car parking was very inexpensive.

In the evening, we decided to play a game... and although we thought about Rummikub, Richard and I were feeling withdrawal symptoms from Settlers of Catan, so Tim got out his set which is different again from the two we have recently played with: 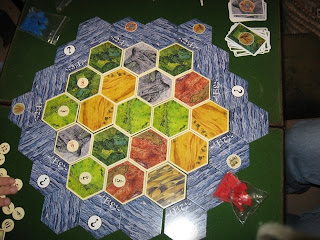 My mother had never played before, so we did an open round, explaining and advising as we went. She used a new strategy ('place the early pieces nearby so as not to have to stretch...') - and beat us all soundly. She was white, and we just played to ten points: 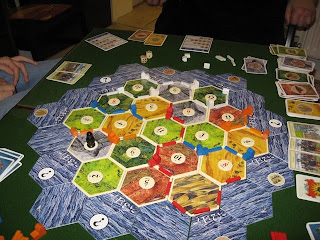