Cats in Cyprus come in many shapes, colours and sizes. There are fairly large populations of feral cats, popular with some Cypriots because they keep the snake population down, although others, sadly, kick them (or worse) and consider them vermin.

Despite a wide range of cats, there's a fairly typical 'Middle Eastern' cat shape that we see fairly commonly. A hint of siamese, perhaps, but basically long and lean with large ears, and good at hunting. Survival of the fittest, I suppose, for hot summers and limited food supplies over the centuries.

Cleo, our 12-year-old cat, is typical of these cats. Her daughter Sophia, who will be 12 in February, is similar, although heavier, tortoiseshell rather than black, and considerably more talkative.

But Tessie, our youngest cat (she will soon be ten) is very different. We didn't adopt her: she adopted us. She's not long and lean; she's more rounded, with fluffy fur that she grooms almost continually. And the most remarkable tail: 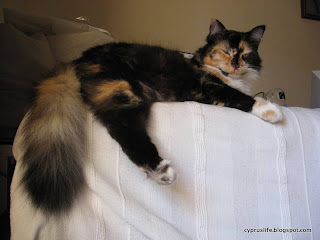 We'd never seen anything like it. It seemed rather out of place at first, but we soon got used to it. Tessie has other characteristics that make her stand out from our other cats too. She's much more playful, for one thing. They were all energetic and playful as kittens, and even now will occasionally bat something random around the floor for a few minutes. But Tessie used to go and find round Lego pieces to play with. She, of all the cats, is the most likely to attack fingers or toes - even now she's middle-aged. She would love to play with Cleo and Sophia, too, although they are not interested. And Tessie sometimes thinks that rolling dice are for her benefit: 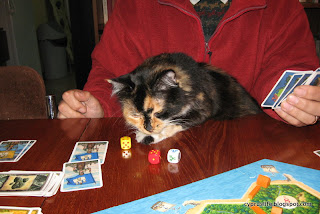 One of the things that particularly endeared us to Tessie when she arrived on our doorstep nearly ten years ago was that she was very good with small children. Cleo and Sophia are not. Sophia's twin Jemima, who disappeared a couple of years ago, was the worst of all. Any sign of a small child in the house meant that we would find her hiding under the bed.

But Tessie, newly arrived, spent hours playing with small visiting children. We assumed she must have belonged to a family with little ones before getting lost, or abandoned. These days, with small children fairly frequent guests in our house, Cleo tends to vanish, Sophia complains a bit and then goes upstairs... but Tessie often stays, and likes to play with children. She even let my small friend Helen stroke her last year: 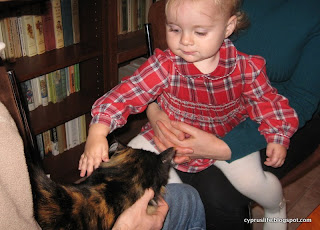 Tessie's voice is nothing like that of the others - occasionally she seems to be trying to mew, but no sound comes out. None that we can hear, anyway. She can make the most appalling noise when defending her territory from other cats, but her normal 'talking' voice - when she is outside a door which she wants opened, for instance - is a kind of chirrup. We wondered for a while if her first family had caged birds.

But as with a person, unusual characteristics gradually seem less significant as one gets to know them better. Tessie likes a lot of affection - possibly more than the other two - which is fine. The worst problem we have with her is that she likes to 'mark' territory - something we thought that only male cats could do. She stands up, her tail quivering, and sprays. It doesn't smell as bad as a male cat, and we don't at all mind if it's outside. We're less impressed when she does it inside as she does, any time she's under stress or when something new comes into the house - such as a suitcase. Recently this has been much less frequent than it used to be; perhaps she's becoming more relaxed.

Last week, I was reading a book called 'Paw Tracks at Owl Cottage', which was about four Maine Coon cats in the UK. I didn't know anything about this breed, other than having a vague idea that they were generally enormous cats.

So imagine my surprise when I read that the distinguishing feature of these cats is not their size (which may be huge, but not always) - but their thick fluffy tails. So large and unusual that they got their name due to a mistaken belief that they were somehow descended from raccoons. Just like Tessie's tail.

Out of curiosity, I googled 'Maine Coon cats'. I found this useful page from a Maine Coon cat breeder. Amongst other things, I read:

"Their dispositions remain kittenish throughout their lives"

"they have a distinctive, chirping trill"

"They generally get along well with kids"

"their eyes.. are large, round, expressive, and set a a slightly oblique angle" 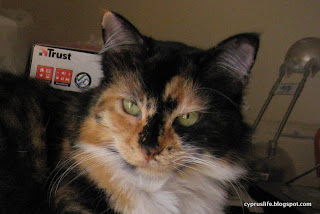 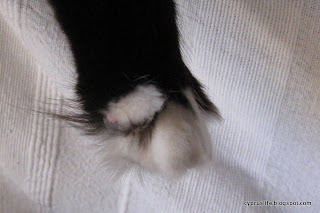 If that weren't enough, I read on another site that most (though not all) Maine Coon cats have white chests - as Tessie does - and that both male and female Maine Coon cats are prone to spraying to mark their territory.

Of course, we have no way of ever knowing who Tessie's parents were, let alone her other ancestors. She's unlikely to be any kind of pure-bred cat - if she had been, her original family would (I assume) have looked after her better, and made far more effort to find her when she disappeared. Piecing together clues over the years, we think she was probably left behind when her original family moved house.

But still. A lot of things fell into place in my mind. It was amazing just how many details fit together. It won't make any difference to us knowing that she may well have Maine Coon in her ancestry - but it's nice to understand, at last, why (perhaps) she is the way she is in so many respects.
Posted by Sue at 15:50

Pretty conclusive, I'd say! She's beautiful and I love the sound of her nature, too. :o)

What a coincidence! I thought of you and your cats today having just read the chapter in June Spencer's book (she of Archers fame) about her semi-wild cats on Menorca. Then I find this post - strange but true!

When I first started reading your post, I immediately guessed Maine Coon. Having grown up with dogs, I was never much of a cat person. As an adult, I have had four cats, and my first and favorite was Mincis. We acquired him when his owner went into a nursing home. He had all the characteristics you described. He also would walk with us to the corner store and wait outside for us, an action that drew comment from all our neighbors. Never having had cats, I never knew this to be unusual. He was a wonderful cat. Sadly he died at 15 in 2002. My vet said that was a quite advanced age for an outdoor cat in NYC. I'm not surprised. He was smart, too.

Hi there, I am a dear friend of Denis O' Connor and have met his beautiful Maine Coons Max & Luis & I would say your beautiful Tessie has Maine Coon characteristics, what a marvellous tail!!. If you haven't read Denis's first book Paw Tracks In The Moonlight then you must, it a stunning book and the story of Denis & his incomparable Toby Jug will stay in your heart forever. Lovely to talk to you. Ann