I'm not one of those people who likes to have a lot of different shoes. My preference is always for comfort above style, and for at least six months of the year I pretty much live in trainers (sneakers). In the summer I wear sandals... and I have to admit, I do have quite a few of them in my closet, along with various old pairs of trainers that I keep for emergency, so to speak. And a couple of 'smart' pairs of shoes for weddings or other special occasions.

Around the house I tend to wear flip-flops, which I find comfortable and convenient. But I know from experience that they're NOT good to wear outside, on the hard (and usually uneven) pavements of Cyprus. So I like to have a pair of comfortable, flat sandals that support my feet, with some kind of straps at the back as well as over the toes. Sounds simple enough, doesn't it? And if one looks at the selection of children's shoes in any shoe shop, there are dozens of pairs of the kind of sandal I like - but too small. There are even some for men - which of course are too big for me.

Unfortunately, however, it seems to be increasingly difficult to find basic flat sandals in women's sizes. If I wanted high heels, thin straps, flip-flops, wedges, or any other fashion shoes there would be a vast choice in both the UK and Cyprus. But not the kind I want.

Happily, back in about 2006, I was offered the last pair of some remarkably comfortable sandals of the kind I like, at a shop along the sea front. I have walked many miles in these shoes. They're looking a little the worse for wear, but after six years that's not unreasonable: 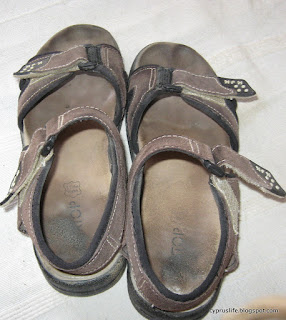 Alas, there are two problems with them. One is that the velcro became less 'sticky', as velcro does after extensive use. I thought I'd solved that, after discovering a site which explained how to hold a lighted match about a centimetre away from the 'softer' part of velcro, so that the little hair things twist back into the fabric. It worked!

Unfortunately, there was another problem with one of the sandals, underneath: 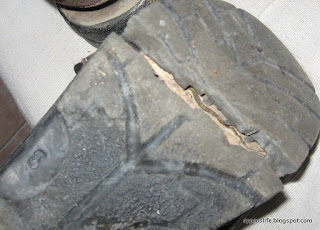 So, the velcro fix was only a short-term one.

Meanwhile, Richard needed some new crocs (a style he finds comfortable, but I don't) and also wanted some 'deck shoes' for wear on King Malu. So, on Saturday we looked at our local shoe shop.. but to no avail. Then we drove to the Shoebox: 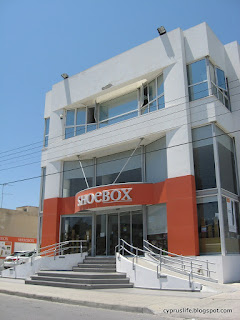 I didn't have much hope - this shop, which used to be called the Shoe Emporium, was a source of some excellent bargains about five or six years ago. But it's gone rather up-market and we haven't found anything there for a while. However, parking is a great deal easier than it is near the sea-front, so we thought we might as well try there first.

Richard found some crocs and deck shoes (at a discount) easily. So that was good.

I didn't find anything I wanted amongst the many displays of ladies' shoes. So I wandered aimlessly by the children's sandals... and saw one style, very similar to my previous ones, which said they had sizes up to 39. My size is 38. I asked if I could try them on. They didn't have the 38, but said that they could order it for me. In typical Cyprus style they scribbled my first name and phone number on a random piece of paper. Later in the day someone phoned and said that they had the size 38, and that I could collect them on Tuesday (Monday being a public holiday for Kataklysmos).

So on Tuesday we went back. On our way in, we had noticed a long coach, rather inconveniently parked: 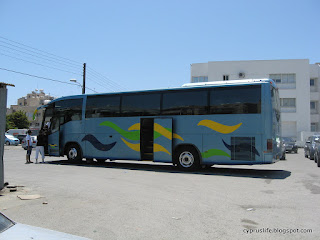 We were amazed at how crowded the shop was - and I was startled to see people buying five or six pairs of shoes at once. Were they having a sale, I wondered? But sale season isn't till August, and there were no signs up.

Richard overheard some people talking. Apparently it was a tour coach from one of the Middle Eastern countries. Since shoes in that country are either expensive, or cheap and shoddy, they liked to visit a shoe shop as part of their holiday in Cyprus to get good value shoes that will last.

Due to the crowds, we waited a while at the front desk to enquire about my order - the assistant flicked through pages of hand-written names and phone numbers, and couldn't find mine. Eventually we discovered that, because they're children's shoes, technically, they had been stored somewhere else. So the size 38 sandals were found. And fitted. And were remarkably comfortable. So I bought them: 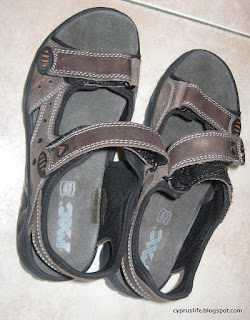 oh I sympathise. I have the opposite problem, in that my size is 35 ( 2uk) and hence can rarely find any 'gong out' shoes or flat comfy ones that don't look like school shoes!