Out of Cyprus: ten days in the Midlands

It's over a month since I last wrote. Being a hands-on Grandma has been thoroughly enjoyable and far from full-time; but still tiring in the heat of a Cyprus summer. David is lively, talkative and energetic from the time he wakes up - usually not long after I do - until the time he falls asleep, not long after the evening meal. If I found an hour or two during the day, when David was out with someone else or playing downstairs in the guest flat with his family, I would either catch up on household jobs, or write emails, or perhaps try and put a few photos on Facebook. After he went to bed, I would usually start to clean the kitchen, and then curl up with a book for an hour or so to myself...

I write this somewhat in the past tense because I've been in the UK for the past ten days. I'm very much looking forward to seeing the family again at the end of the week, for a few more weeks until they leave Cyprus for their next adventures in Central and South America.

It was with very mixed feelings that I set off, on the evening of July 20th. I looked forward to getting out of the Cyprus heat and humidity, and I was so exhausted that I knew I needed a rest. The trigger for choosing this particular period was an invitation to my younger goddaughter's wedding in Birmingham, and I also wanted to spend a few days with my father, including helping him finish an ongoing project to write and publish his memoirs.

But although I needed a rest, and some cooler weather, I hated saying goodbye to the family. They were also struggling in the intense heat, with all usual children's activities closed for the summer, having to stay indoors for at least five or six hours during the hottest part of the day: not something appreciated by a lively and energetic three-year-old.

However, when I checked for flights on the day I wanted to fly, only about six weeks earlier, there was one direct to Birmingham for under sixty euros. It seemed to be a confirmation that I should indeed go. We didn't know, at the time, how long the family would be staying in Cyprus, and I needed to make a definite decision in order to make other arrangements.

My good friend Heather, who lives in Birmingham, suggested staying with her for three nights, and my father contacted my three siblings who live in different parts of the UK, and determined that the only day they could gather at his house for a family reunion was the day after the wedding. So, gradually, arrangements fell into place.

I arrived at Heather's via taxi from the airport shortly before 2am UK time, very tired indeed as I can never sleep on flights, but slept well and then spent a wonderful and relaxing day with her, including a visit to my other goddaughter - Heather's daughter - and her one-year-old son.

On the Saturday I caught a bus into town, where I met Tim, and we then got on another bus to take us to the wedding, which was in a small and friendly Methodist church. 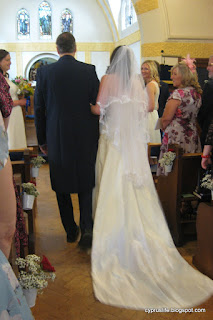 All went well, the bride looked radiant, and the reception was in a lovely place set in the middle of the countryside: 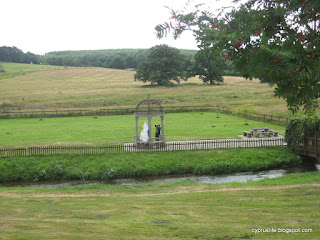 I was extremely impressed by the cake, baked by the bride's mother, who had never done this kind of thing before: 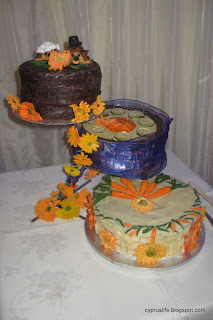 I was at a table with other godparents and neighbours of the family. I didn't know any of them beforehand but they were all friendly and it was a very enjoyable day. The evening party was due to go on until midnight but I was tired, and the music was quite loud, so Tim and I left around 10pm.

On the Sunday morning I packed my case (I had travelled with hand luggage only, using a cabin bag as large as is allowed) and got on the bus to Selly Park, where I went to a pleasant service at Christ Church, which still feels like 'home' to me, even though there were only a handful of people I knew there. Tim had been staying with other friends and was there too, and afterwards we were collected by my father and driven to his house, where my siblings and families had gathered for an excellent lunch: 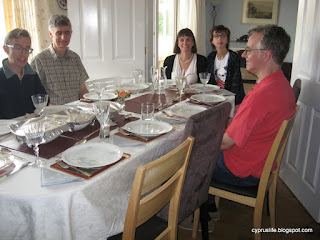 Tim stayed overnight and was able to help with various computer issues; on the Monday we were taken out to lunch at a nearby Carvery. 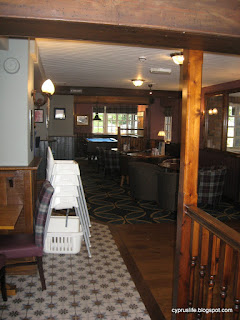 Then Tim was dropped at New Street so that he could get the train back to Surrey.

The subsequent week has raced past, and I have thoroughly enjoyed being a 'lady of leisure'. The weather has been quite rainy and not particularly warm, but we've managed a few short walks, and even some blackberrying nearby.

On Tuesday my two young step-nieces (if that's the correct relationship) were here for the day and we all went out to lunch at a garden centre. On Wednesday afternoon one of my secondary school friends came over for a couple of hours. On Thursday we went to a charity lunch organised by the local church.

My father's wife is an excellent cook, and in between the outings we have eaten some delicious meals. I've helped a bit with food preparation, but find myself much happier in the sous-chef role than being in charge of a kitchen. I don't like the word lazy...but I do appreciate an easy life! It was enjoyable, too, experimenting with one or two different things, such as these breadcrumb-and-parmesan coated courgette sticks which we had seen online, and which used up a couple of the courgettes from the garden produce: 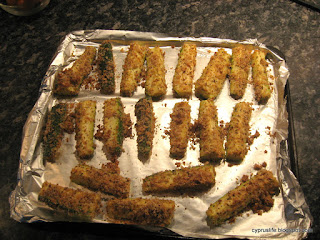 One thing I wanted to do while staying here for a week was to help my father finish his memoirs. This project has been ongoing for at least a couple of years, and in the weeks before I arrived, he wrote a few extra chapters to fill in some gaps. I've been through the whole thing (nearly 70,000 words) editing and proof-reading and compiling into Kindle-readable versions so we and other family members could check for inaccuracies, omissions and errors.

I finished the second draft yesterday evening, with a sense of satisfaction; we hope to publish via CreateSpace later in the year.

In a few hours I will be travelling down to Surrey to spend a few days with Tim before returning to Cyprus on Friday.

Blessings on the remainder of your time in the UK, and a safe and quick flight back to Cyprus this Friday.