The Twelfth Day of Christmas

While I'm not rigid about traditions, nor superstitious, I like to take our Christmas decorations down before January 6th. It's what I grew up doing, and it always feels like the right thing to do. The Christmas season is finishing; today is a public holiday in Cyprus for Epiphany.  Schools have been closed since just before Christmas and will re-open on Monday. That's not relevant to us, but somehow it makes the past week feel like a relaxed, post-Christmas period before the year gets going.

I thought my young friends might like to help me take decorations down on Tuesday, but their oldest sister was still here, back from the United States for two-and-a-half weeks, and she had been asking to play our game Dixit. So Sheila and her four daughters came over for the morning, and we played Dixit, followed by a few rounds of Ligretto. Then I taught them Kingdominoes, the new game which Tim bought us for Christmas.

So the decorations stayed up for a few days longer, which was appropriate as we finished the mince pies and various cakes. And on Friday, I took everything down. Four more Christmas cards had arrived that morning, so I put them, with the others for this year, in a large jiffy bag to put up in December.  I packed the decorations away, probably more efficiently than my small friends would have managed, and then started to take the tree apart.  Helped - or not - by Alex: 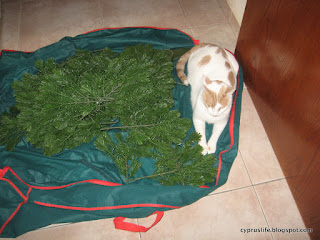 Alex is the kind of cat who accepts pretty much anything. He's good-natured and friendly and doesn't mind things changing around him. His sister Jane, by contrast, doesn't like anything to disrupt her day. So she spent the morning racing around the living room, clearly very disturbed by the fact that all the decorations were going away. She wasn't too pleased when they went up, but she'd got used to them. And now we were making yet more changes...

Today, when Richard went out, I set to work to dust and clean the house, as I usually do on Saturdays, after changing the sheets on our bed. The trouble with dusting is that it makes me notice when things are out of place, now that more surfaces are visible without decorations on them. I re-organised a couple of bookshelves, to make space for some new or recently read books and I also did a couple of loads of laundry. I sorted out the closets on our landing, too; one of them has central heating pipes running through it, so does duty as a kind or airing cupboard in the winter. It's useful on damp days, when the laundry is almost - but not quite - dry.  But there were other things in there, including several pillows that we've acquired recently, and a duvet that belongs in our guest flat..

Once I've started this kind of thing, I tend to keep going until it's finished. I don't know how many times I went up and down the stairs, moving books and bedding. And I still hadn't finished the dusting.  I started about 10.30am and didn't finish until almost 1.00pm.  After lunch I swept and mopped and vacuumed, and the house does look and feel a lot fresher and cleaner, which is good. But Jane was even more disturbed by all the movement, and since I kept going she decided to attack Alex instead. It wasn't just play-fighting, but the ears-back growling vicious fighting that she does when she sees another cat outside, or when Alex comes in smelling of another cat. He takes the brunt of anything that annoys her.

However, after I'd eventually finished, and showered, and sat down at the computer to check email and Facebook, Jane was happy again.

Sometimes traditions or schedules are the only way we get things done. We've been saying for months that we need to play more of our board games. We play Settlers of Catan and/or Cities and Knights at least once a week with our close friends. We don't forget simpler games such as Dixit, Ticket to Ride, or Kingdom Builder, and we're not going to forget Kingdominoes; it's the kind of game that we'll probably play fairly often when we have a spare half hour or so after another game.

But other games - in particular Puerto Rico, Agricola, Above and Below, and Grand Austria Hotel - are a great deal more complicated. So we don't tend to play them very often - and then, when we do, we have to re-read the rules and it takes awhile to get into them. But equally they're not games we want to play too often. About once a month works well.  So we decided that we'll play one of them per week, on a Saturday evening.  If we remember...