Back in the middle of October, just before Richard celebrated his 60th birthday, I made a rather rash comment. I had baked an early birthday cake when we had a meal with some friends, the weekend before the actual birthday. One of the friends asked how many birthday cakes he was going to have altogether.

'Sixty, I should think,' I said, without really thinking it through. I thought they might laugh and then I'd say, 'Well, maybe three...'.  I had already baked his 'official' cake, a Christmas style 'celebration' cake to be eaten when we had his birthday barbecue, and I was planning to make one for the actual birthday.

Instead, everyone seemed to think it was an excellent idea. I said, quickly, that it would be sixty cakes over the course of the next year, not just in October. And then, when I told one of my sons about it, he said that of course they should be sixty different cakes. Even more of a challenge. There are about ten or so different cakes that I make fairly regularly, and I knew I had recipes for many more... and, if I run out of cakes from recipe books, the Internet is an excellent source too.

So, for the record, here is a collage of the twelve cakes made so far, in eleven weeks: 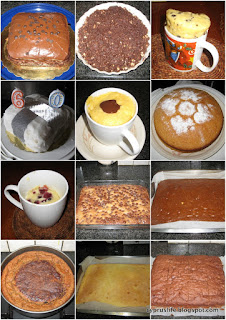 The first was a basic chocolate fudge cake, with raspberry jam filling (I am being specific here; as I near the end of the sixty, I may resort to a chocolate fudge cake with apricot jam filling and claim that as different).  Second, for the actual birthday, was a no-bake chocolate biscuit cake.  Richard was given a book of mug cake recipes for his birthday, and people had started commenting on the calorific nature of my project, so on the Sunday after his birthday I made us a chocolate-chip-banana mug cake which rose very well, and prompted us to buy a new, large mug for future mug cakes.

The fourth cake was the official rich fruit cake, which Richard ate (with help from a few friends) over the next few weeks. I made a Christmas cake too, which isn't yet finished, but since that was the same recipe, and was for Christmas, I haven't included that in the list.

Next was another mug cake - a coconut one with chocolate topping - and then I baked a victoria sandwich (albeit in the food processor) with apricot jam filling.  I then tried yet another mug cake recipe, one using a few frozen berries; it didn't grow much, so looked very small in the mug; but was delicious.

The next few cakes were made for the pre-Christmas and Christmas season, but I counted them in my list.  First a chocolate chip applesauce cake, which was a bit undercooked for some reason, but all the better for having a sauce part at the bottom.  Gingerbread is something I always make at this time of year; we still have a lot of that left, some of it in the freezer.  For a slightly healthier option I made a chocolate chip cookie cake with chickpeas rather than flour, and the end of that was enjoyed by someone who can't take gluten.

For Christmas Day, as an alternative to mince pies and Christmas pudding, I made a lemon drizzle cake, which was much appreciated.  And the twelfth cake, made yesterday, was a chocolate banana cake to take to a New Year's Eve meal with our friends. The recipe recommended a rich icing with 175g chocolate and 150g icing sugar (among other things) but I decided to take it un-iced, and it was still very good.

(I have included links to relevant pages on my recipes blog for four of the above cakes. The rich fruit cake is Delia's 'celebration' cake with home-made marzipan and royal icing rather than nuts on top. If anyone happens to read this and would like recipes for any of the other cakes, let me know in the comments and I will write them up - with my own instructions and comments, of course - on the recipe blog).
Posted by Sue at 17:13