Cyprus and the Covid-19 Coronavirus

I hesitate to add to the many, many articles and posts on the topic of the current pandemic. But writing a blog post is an easy way of letting folk know what's going on, and what life is like for those of us living in Cyprus as the crisis develops around the world.

The latest figures, as of today, show 26 people infected in the Republic of Cyprus. That doesn't sound very many, but in a population of just under 1.2 million, it's equivalent, percentage-wise, to around 1700 in a country of 66 million people.  Which is more than the UK, currently.  However, almost all those tested positive for covid-19 in Cyprus are people who flew in from other countries, many of them from the UK.  Most were detected with fevers at the airports, and isolated immediately.

The Cyprus government does not want it to spread.  So last week they announced that all schools would close until April 10th; since that's the start of the two-week Easter break, children are all out of school now until late April.  But they're not playing outside, as they normally do at weekends or holiday periods.  The playgrounds are deserted.

Gatherings of more than 75 people are also banned.  And anyone arriving from any country had to go into 14-day mandatory self-isolation.  On Friday the government announced that there would be no tourists or visitors at all - only Cypriots, legal residents of Cyprus, and legitimate workers would be allowed in.

Today they took even stronger measures: anyone who does come into the country must present a certificate that they have tested negative for coronavirus, and must also go into 14-day quarantine, at a state-mandated institution.  Restaurants, cinemas, malls etc are all going to be closed.

The tourist industry is going to be very hard hit.  Airlines may go bankrupt.  Self-employed people will struggle, although the government is offering some form of compensation in a financial package, yet to be unveiled.

It's all very worrying.  Not that we are likely to develop serious complications if we catch it; we're not (quite) in the over-65 risky category, and we don't have underlying health issues. We are far more concerned about elderly relatives in the UK, where few measures are being taken to ensure safety.  And we can't really leave the country; flights are being cancelled all the time, and if we did succeed in getting out, it would be difficult to get back.

We've read about people panic-buying toilet paper in Australia and, more recently, the UK.  And while we haven't done that - and there was plenty of toilet paper in the shops, at least at the end of last week - we did do a bit of extra shopping on Friday, just in case we have to self-isolate. 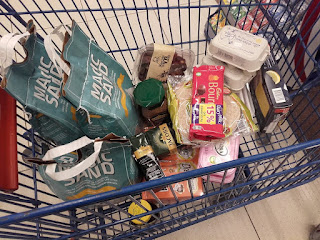 We bought rather a lot of cat litter, for instance.  There were only three bags of our preferred brand at Metro, so we bought them all, and three more at SuperHome Centre. We bought some extra coffee and chocolate.  Another jar of Marmite.  Earlier I went out to the local Achna Discount shop, and bought some extra dishwasher tabs, soap, cat food, canned chickpeas, tahini and bread flour.  We can, if necessary, eat a lot of home-made bread and hummus.

But we're well-off for food anyway.  We usually have at least a couple of weeks' worth of frozen meals; when I cook something in the slow-cooker, I make 6-8 portions and freeze what we don't eat for future use. 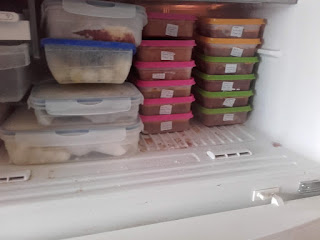 My main concern, if all the shops close, is fruit and vegetables. I hope the fruitaria will stay open, and since most of the produce is grown in Cyprus, there shouldn't be a problem with supplies.  But just in case we can't get out, I did buy a few extra peppers to cut up and freeze: 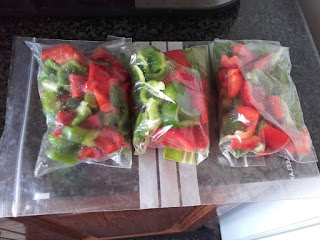 I did the same with mushrooms.  And we have several containers of frozen stewed tomatoes, which I use instead of canned.  I  also buy peas and french beans ready-frozen.

know we're more fortunate than many, in that we can buy more food than we need and freeze what won't keep.  Being dairy-free is an advantage at present; we have several litres of coconut milk, which keeps for months unopened, as it was on special offer a week ago.  And we made an extra trip to the nut warehouse on Friday, so there are plenty of cashews to make cashew milk, and other nuts which we eat for breakfasts.  We have plenty of vegan 'fasting' cheese, too, which lasts much longer in the fridge than dairy cheese.

Last week I had, a little ironically, a rather more sociable week than usual.  Monday morning saw the monthly local Christian writers' group.  Seven or eight of us were present.  In the afternoon I went, for the first time, to a local reading/book club.  Another seven or eight people were there.  That's also once a month.  Somehow I doubt if either will meet early in April.

On Tuesday we spent most of the day with our closest friends - who we will continue to see as normal, unless even more stringent regulations are passed, or one of us becomes ill.  On Wednesday another friend came over for coffee.  On Thursday I went to a Lenten Bible study at St Helena's, the Anglican church which we're now part of.   I think there were eleven or twelve people there.

We went to St Helena's this morning for the regular Sunday service.  The congregation was perhaps a little lower in numbers than usual, but there were more people there than I expected.  We were given blobs of hand sanitiser on the way in, and were told 'no physical contact' during the passing of the peace.  This is when folk usually shake hands and hug as many people as possible.  Today we kept our hands to ourselves. And there was no wine at the communion, other than for the minister.

The coronavirus is the main topic of conversation wherever we go, but most people we meet are fairly resigned to it. They are taking sensible precautions but not panicking.  But then I suppose anyone inclined to panic is already self-isolating.

And to change the subject entirely, so I can post a rather more interesting photo, one of my freesias came into bloom yesterday: 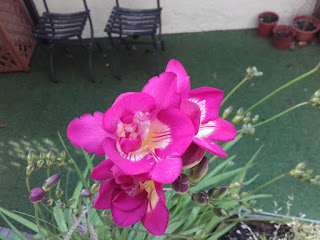 I hope it goes well for you and Cyprus.