Summer has arrived in Cyprus

I shouldn't have been surprised.  My Facebook 'memories' were full of reminders about Summer arriving in Cyprus in the middle of May.  Last year it happened on May 13th. But it had been a gradual process over the course of a few weeks.

This year we seem to have had quite a long and pleasant spring, even if most of it has been spent in lockdown mode. It has been sunny during the daytime, but cool enough to continue to wear jeans and - at least in the evenings - a sweater or light jacket. The heating hasn't triggered itself on since early March but we hadn't really noticed.

It's only three weeks since we moved from using our triple-thickness duvet to the double-thickness one. Last Saturday I did say that perhaps it was time to move from the double one to the 'light' 4.5 tog duvet, but Richard said no, he still wanted the warm one.  So I thought we'd keep that for another couple of weeks...

A week ago we were opening the windows that have fly-screens (to keep insects out and cats in) through most of the day, but closing them in the evenings. Each morning I pulled the curtains or blinds to let in as much sunshine.  I was still wearing long trousers and a long-sleeved top when I went out for a walk with my friend Sheila at 6.00am...

On Thursday, it felt a bit warmer first thing, and the day quickly warmed up, though not unpleasantly so. Now that most shops are open again, we decided to buy a few things we needed so we went out in the car for the first time in a while.

We had been convinced of the importance of Vitamin D in strengthening the immune system and giving protection against the more unpleasant effects of the coronavirus. It might seem unnecessary to take supplements in a sunny country like Cyprus, but once it gets really hot I will not be going out at all in the daytime. So our first stop was Holland and Barrett.

Then we went to Mr Bricolage, where Richard hoped to find some nuts and bolts which he needed for his boat. Alas, they didn't have the exact size he needed. But we did see that they had the water filter cylinders we use, at considerably lower cost than we have been paying. And they should have been changed at least a month ago. So we bought those. And at the check-outs we saw some cloth masks.

We had talked about making masks, and had been uncertain as to whether there is any point at all wearing non-surgical ones. The consensus seems to change regularly. But there are some shops or outside stalls where customers are asked to wear masks, and as these were both washable and fairly good value, we decided to buy some of those too.

Then on to Christou Bros where Richard found the nuts and bolts he needed (at the grand cost of a little over a euro for them all).  Then on to Shoebox, as my outdoor sandals, bought eight years ago, were wearing out. I realised that the children's section was likely to be best, and was pleased to find some sandals I liked, albeit not quite as sturdy-looking as my previous two pairs.

By this stage it was decidedly warm. We wanted to keep the 'tradition' started last year of having ice cream on the first day of summer (in our opinion). But all the ice cream places seemed to be closed. We had heard that an Italian one near where we live is open, but as we drove past we saw that it was closed. Perhaps it opens only in the evenings.

So we went home for a cool box and ice packs, then into FoodSaver, a frozen food market where, last summer, our son Tim discovered some delicious luxury dairy-free ice cream.

Thus we 'celebrated' the first day of summer in lockdown style at home: 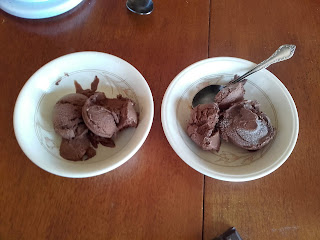 I also got out the frappé machine for the first time this year, and made myself a frappé. 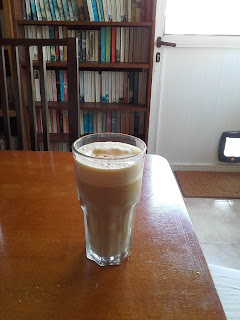 And because the temperature was predicted to rise, I did a bit of sorting in my closet. I put my jeans away, and found my shorts.  I also sorted out my reasonably respectable shirts and put away the large selection I have that have developed holes over the years, which I only wear under sweaters.

We started using our ceiling fans, too. And I remembered why we don't light candles at meals during the summer, although we have been doing so since Christmas. After the current candle had been blown out by a fan for the fourth time before we had even started eating, I decided that another feature of summer is to put away the candles.

Nothing prepared me for Friday. I don't walk with Sheila on Friday, but I've been going out for short walks on my own some mornings. I got up around 6.30am, and went outside to put my shoes on.  I felt such a rush of warmth that I wondered if I were developing a sudden fever. Then I looked at my phone. My weather app told me that it was 24 degrees already, due to be hotter still later on.

So I just watered the plants rather more thoroughly than I had been doing, and didn't stay out for long. By mid-morning it was well over 30 degrees. I didn't walk to the fruitaria for the week's fruit and vegetables; Richard drove me there.  In the evening we decided to go for a walk locally - just a couple of kilometres. We didn't go out until around 8pm and I nearly melted. It was still 31 degrees.

Later, I removed the medium duvet from the cover.  We might still need the thin one if it cools down a bit next week, but the cover on its own was just fine last night. We did think about cleaning the air conditioner in our bedroom but it was only 27.5 degrees and we run the a/c at 28, so there didn't seem to be much point.

This morning I wore my walking shorts for the first time to walk with Sheila, and still felt too hot.  We decided to clean the bedroom air conditioner in the morning so we could run it for a few minutes to get rid of the smell of the cleaning fluid before using it in the evening. 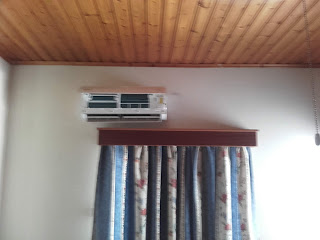 Then Richard cleaned the one in his study. 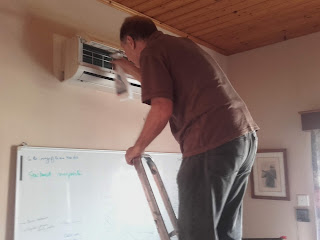 It doesn't take too long, but is important to do each year as there can be fungal growth over the winter.

We had been talking about replacing some of our air conditioning units this year, as new ones are so quiet and efficient, using very little electricity.  They're much better for the environment than older ones, too.  It seems, currently, that we'll probably be stuck here in Cyprus all summer and our computers can't work over about 30 degrees.  I feel ill if I get too hot.

In addition, the a/c unit in Richard's study is very noisy, and the one in my study doesn't always work, as well as being slightly broken.  We definitely don't want either of them to break down during the main part of summer, when there will likely be a dearth of units available, and we might have to wait a long time to have new ones fitted. Besides, there might be another lockdown, if the number of coronavirus cases starts to increase again once tourists are allowed into Cyprus.

So this morning we decided that if we were going to replace our air conditioners, it should be now. We went out mid-morning to George Theodorou, our favourite local white goods place, and ordered them.  Also, thanks to a recent generous gift, we decided to replace the old (at least 20 years old) and inefficient large one in our living room.

We went to a couple of other shops too, and by the time we got home I was almost dizzy with the heat and had to lie down for a while.

Richard is happy about it.

Lovely post, Susianna. Your heatwave is tough, I don't much like it above abo
ut 24, 30 plus must be awful. Just hope that somehow it will be possible for you to escape to UK sometime this summer.