Just two days ago, I wrote about the Larnaka Salt Lake. It's an interesting area not just because of the salt, but because it's home to thousands of flamingoes over the winter. There weren't very many on Thursday morning, and they were rather a long way away.

But this morning, there were lots. Several hundred, at least. We reached the Airport Road end of the trail, and could see quite a group of flamingoes, close to the edge of the lake: 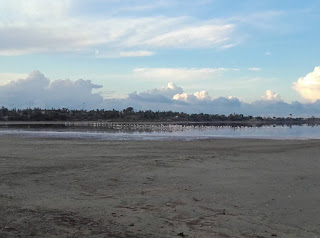 Nobody is supposed to go any closer to them than the trail, as they could be frightened away. And I rather wished I'd taken my camera rather than just being equipped with my phone. Still, zooming in slightly, even though not high quality, does make some of the flamingoes fairly clear. Even if they still just look like pink blobs, they are at least pink blobs with long legs.  The water isn't deep, so they were standing in their usual spread out groups, making quite a bit of noise. 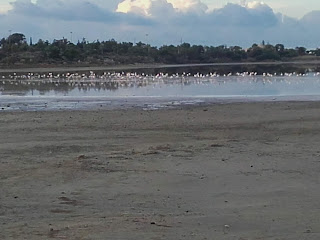 No maximum group size, masks or social distancing required for flamingoes!
These weren't the only ones on the lake - here's another zoomed out shot, showing many others, further away. It was supposed to have been raining yesterday afternoon and most of today, so perhaps they arrived in anticipation, only to find a pleasantly sunny weekend: 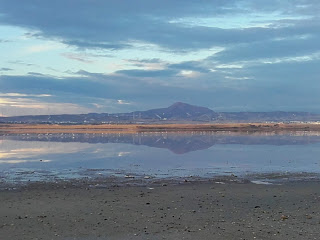 As we watched, the long line in the distance started moving. Apparently one flamingo had decided to head in the direction of the group nearest to us, and the others followed... 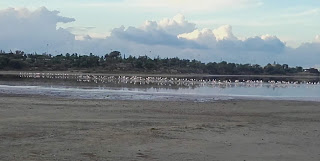 There's a notice board at the end of the Salt Lake trail, explaining some of the history of the place, along with some of the mythology (albeit expressed as history), in both English and Greek: 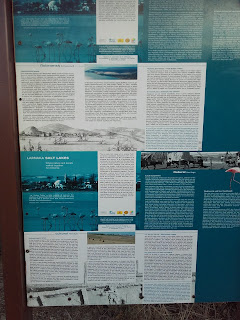 Here's just the English part which might be clear enough to read if you click the photo to enlarge it. It doesn't say how the salt was harvested or cleaned, but it does explain that the flamingoes eat tiny pink brine shrimps that grow in the lake during the winter. When this source of food is gone (usually around April or May), they fly away to another lake in Cyprus, or back to Africa for the winter there. 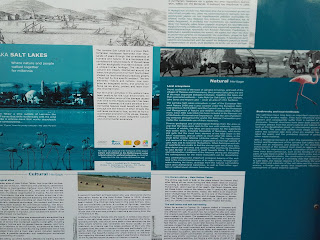