Re-reading and Re-homing of Books

As I wrote in a post nearly two weeks ago, I have a somewhat overcrowded shelf of books which I haven't yet read. I just stopped typing to count, and there are thirty-eight of them. That includes five for the reading group I mentioned in that post, and three or four from my birthday earlier this year, or possibly even last Christmas.

The rest are almost all from the St Helena's monthly book sales, some of them bought as long ago as November 2018. At fifty cents a book, it's very tempting to pick up all kinds of books I might not otherwise think about. If I decide I don't like them, I can donate them back the following month... or year, or whenever I get around to reading them.

What I didn't mention is that we also have about 3,500 books, most of which I have read at least once, in various locations around the house. And since I have some favourite authors whose works I like to re-read regularly, I try to intersperse around three or four new-to-me books with six or seven old favourites.

I'm told I started reading books when I was about three or four. My first favourite books were by Enid Blyton (as was the case with most of my generation in the UK). For all her many faults in style and attitudes, she engendered a love of reading in many thousands of young children. By the time I was about ten or eleven, I had a couple of hundred books of my own, and during my teenage years I used to spend most of my birthday or Christmas money on inexpensive Armada paperbacks, which were popular in the 1970s, often on special offer during the January sales.

There wasn't much 'teenage fiction' in those days; I still re-read my older children's fiction (Malcolm Saville, Elinor M Brent-Dyer, Noel Streatfeild, Louisa M Alcott etc) and I also began reading 'grown-up' fiction when I was around twelve or thirteen. At school I discovered Jane Austen and Charlotte Bronte. My father introduced me to PG Wodehouse, my mother introduced me to Gerald Durrell, and my aunt, who worked in a bookshop, introduced me to Georgette Heyer. These are still amongst my favourite writers.

It wasn't until I was in my mid twenties that I came across authors like Rosamunde Pilcher and Maeve Binchy, and the whole world of so-called 'contemporary women's fiction'. I gradually collected some, many bought second-hand or given to me for a birthday or Christmas if I requested them. When I like an author, I try to collect all their works.

By the time we had moved all our books to Cyprus, I had around two hundred volumes of 'my' fiction, mostly character-based saga novels, light Regency romances, contemporary fiction, some Christian fiction, and some oddities like Terry Pratchett's 'Discworld' series.  We also had perhaps a hundred biographies, two hundred or so Christian non-fiction books, a hundred or so of Richard's fiction (thrillers, spy fiction, and so on) and around five hundred children's books, mostly from my childhood and teens, and the ones given to our sons. And some general non-fiction, of course: dictionaries, reference books and so on.

However, I'm not entirely sure how the 1200 or so books we had on our shelves around twenty years ago have managed to multiply to nearly three times as many. But we are finally running out of bookcase space, and - more worrying - of places to put new bookcases. I hate getting rid of books, though I don't mind passing them on to other people who I know will love them. So, until recently, when I need to make space in 'my' bookcases, which are in our dining room, I have moved a few more down to our guest flat.

I've been keeping track of all my reading on GoodReads, LibraryThing and my book reviews blog for a little over twenty years, and in that time I've apparently read 2171 books.  That's not very many.  Since the boys left home the amount has increased, and I'm aiming to read 120 books this year, though I'm a bit behind schedule at present.

But I worked out that if I read 120 books per year, and simply re-read all our book collection, without anything new, it would take me 30 years to finish. Now I'm not going to read Richard's books (around 1000, including both sailing and thriller-type fiction and some of his theological and missiological books) and I'm not going to sit down and read reference books, of which we have many.

Even if I just include 'my' fiction books there are probably well over 1000 of them, and there are some I want to re-read at least once a decade.  I read some non-fiction too, and there are some of my children's/teenage books that I like to re-read regularly. In my planned ten books per month, I usually aim for one Christian non-fiction, two or three new-to-me-books, one or two re-read children's books, and five favourite authors from 'my' fiction whom I'm re-reading. Sixty per year. 600 in a decade...

Thus I don't need to keep more than about 600 of 'my' fiction. And that's about the number I have on our dining room shelves. 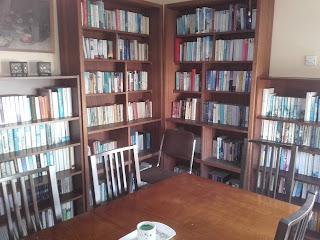 So for every new book I read, and want to keep (and probably re-read eventually) I can move a book to the guest flat. Of course it doesn't quite work that way; usually I fit more and more in the gaps until I have no room at all, then select a dozen or so to take downstairs. That's what happened on Saturday, although I was more ruthless, and removed thirty books from the shelves.

They were so squashed together that I spread them out a little.. I blew off some dust, too, and cleaned the shelves properly.  They do look cleaner, but while there are now one or two slight gaps, it doesn't look as though thirty books have been removed.

Then I looked at the guest flat shelves.  The bookcases are becoming over-full. And since guests usually only stay a week or two, they don't need many hundreds of books, so it finally occurred to me that I could actually pass a few of the guest flat books to the church book sale. A radical thought. There are books down there which I know I will never read again. There are some which I have never read at all. There are some I don't recall ever having seen before...

I found about thirty books which I plan to give to the book sale. Here's a selection, two of which are duplicates of books we have elsewhere, some of which I read and didn't like, some of which I read and thought were okay, but I won't read them again, and at least one of which I am quite certain I have never seen before. Indeed, when I went to remove these books (and the others I found) from my GoodReads and LibraryThing catalogues, three of the ones I didn't recognise weren't there at all. Maybe books breed when I'm not looking. 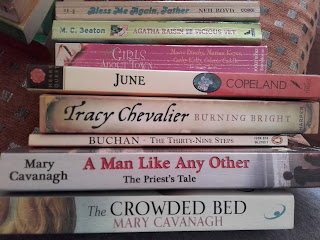 Or maybe a guest bought a book at the airport, read it, decided they wouldn't read it again, and left it behind. If that's the case, I just hope they won't look for the book when - in some futuristic post-pandemic world - they visit us again.
Posted by Sue at 20:20