Anyone who has followed or popped into this blog over the course of the past decade and a half will probably have come across mention of our roof leaking. It's not uncommon in Cyprus to have areas where heavy rain leads to dripping through the roof, and we're thankful that it's only ever been above the stairs. Since stairs don't generally have carpets here, it's annoying but it doesn't take long to mop it up afterwards.

And if you haven't come across any of those posts, and/or are interested in seeing some, this post from 2009 was all about rain, with a photo at the end of our cool box and a yellow bucket strategically placed to catch the drips. In our first few years here, we had two or three people come to look at the roof.  One or two broken tiles got fixed, and suggestions were made, but in the end the regular response was along the lines of, 'This is Cyprus. Roofs leak.'

The problem was that it got worse each year, or so it seemed. Then in 2010, a couple of Richard's sailing friends took a look at the roof, and discovered a hole, and also a large amount of pigeon mess which was making the rain bounce in an odd direction. I wrote in this post about how they cleaned the mess away, and sealed the hole. And it definitely helped the problem that winter.

But a year later, there was more torrential rain, and once again our roof leaked. I wrote this post, illustrated again with a photo, except that by then we had moved from a yellow bucket to a blue one. In 2014, we had some loft insulation installed, and another hole in the roof was fixed. And so it went on... each year, we expected rain through the roof when the wind was high and the rain was heavy.

So it wasn't any surprise that it happened this year, when it rained - except that it seemed considerably worse than last year's. Out came the cool box again, although this time it was accompanied by a large empty paint pot. 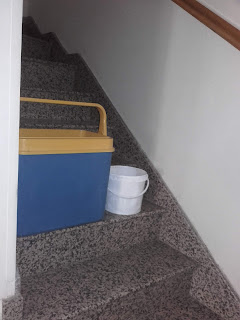 But I had to remove photos from the walls, something I hadn't had to do for some years. And it seemed that the rain was coming through in more places than previously. We realised it had been a while since the roof was last cleaned, and we knew there was a lot of bird mess up there. So we called our friendly roofing guy, who eventually came at the end of last week, with another guy, to check the roof and fix whatever problems they could find.

It was important that they came on Friday, as heavy rain was predicted for last weekend, and our roofing friend told us he'd been asked, urgently, to look at two other roofs as well that morning.

It turned out that there were more problems than just an excess of bird mess. Richard had asked if something could be done to make the problem less severe in future, possibly by moving some of the pipes on the roof. Since I didn't go up there (and have no wish to do so) I didn't entirely understand, but it all sounded like a good idea. 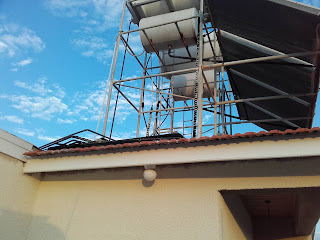 However, when they moved the pipes, they discovered an entire area of the roof that had never been sealed, with some wood that was rotting away.

And when they'd replaced the wood and sealed the area, they went over the whole roof carefully. They discovered a couple of broken tiles which they removed and replaced. Here are the broken ones: 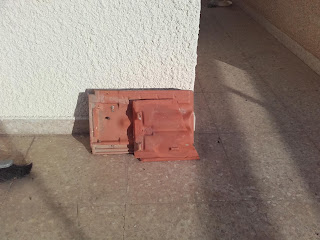 I think the roofing guys expected to be here for about an hour, but in the end it was nearly three hours. Thankfully it hadn't started raining, so after cleaning up they hurried off to the next job, hoping to fix another roof before the predicted rain.
Except that it didn't rain. There was a bit of lightning and thunder in the distance, but not a drop of rain. On Saturday evening we had maybe five minutes of light rain, but not the kind that would have leaked through. On Sunday it stayed fine and sunny.
I don't think I have ever before heard Richard express a wish that we could have some really heavy rain - not because he likes rain, but because we would really like to know if this latest repairwork has actually fixed the problem, at least for this winter.
There's rain predicted for later this week, and Saturday, so maybe we'll find out then: 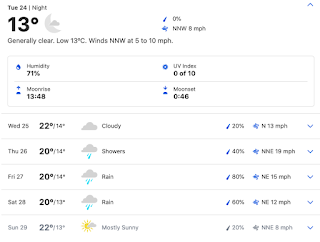 Or maybe it will be another fine weekend.  Perhaps fixing the roof is the equivalent of going out with an umbrella, and ensures that it won't rain after all.
Posted by Sue at 18:15

I hope that your roofers have fixed the problem for good this time.