April, and restrictions ease in Cyprus

So it's over two years since the pandemic started. Case numbers are still fairly high in Cyprus, given that the population is not much more than a million. But restrictions are easing, as they have in many other Western countries in the past couple of months. We still have to wear masks in shops and other indoor public spaces, but safe passes haven't had to be shown in supermarkets or other grocery shops for a couple of weeks, and as of Monday they won't need to be shown anywhere.

I mentioned in my last post that March had turned chilly, as often happens during the first week of March. I didn't expect that it would continue to be decidedly on the cool side for Cyprus. We've had to have our gas tank refilled at least three times this winter - it was only once a year ago. The central heating was coming on, if only for half an hour or so, every day until the end of the month.

We realised how unusual that was the day after the clocks went forward (the last Sunday of March); we didn't change the central heating timer clock, and realised it had not previously occurred to us that we might need to. Never before has the heating come on during the daylight savings/summer time period.

I was still wearing several layers of clothes, using a microwave wheat bag every night, and still using our double thickness of duvet (13 togs and 4.5 togs together). Although I change the sheets and pillowcases every week, I only change the duvet cover once a fortnight - and both times, during March, I pondered whether to move to just the 13 tog duvet, and quickly decided against it. It's only in the past week that it started to feel over-warm, and today I put away the 4.5 tog duvet. At some point we'll have a couple of weeks when we just need that, then I'll wash them both and pack them away for the summer.

So it was no surprise to learn that March was the coldest ever for Larnaka (and other parts of the island).

I took very few photos. I didn't even take one of yellow foliage - perhaps it took longer to appear. I did take this photo, however, which is mostly yellow, about four weeks ago: 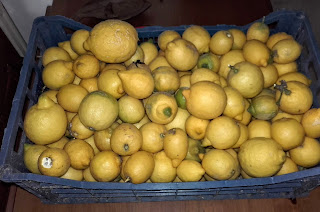 A crate of lemons, brought to us by a friend who had been employed to cut down an old lemon tree that was growing too close to someone's house. That wasn't all of them - we took maybe 25% of the lemons we were offered.  I don't know how many kilograms there were, but I spent a fair bit of time grating skin to freeze zest, juicing them - to freeze, or use.

I've frozen two biggish boxes of lemon 'cubes' to use when I need just a tablespoon of the juice in the months when lemons are more difficult to get hold of, and several small boxes with 100ml each of lemon juice to use in various recipes that need more than a tablespoon. I've also frozen a couple of boxes of lemon slices, to use in water, or on salmon.  And during many of those chilly evenings we drank hot lemon and honey.

I had to throw out maybe three or four that started to go mouldy, but I kept the crate outside, and the colder weather meant that most of them kept very well. I haven't used them all, even now. But the ones that remain are very small and getting a bit dried out.

As usual, I walked three times a week with my friend Sheila, along part of the Salt Lake trail. I say 'as usual' but for a couple of weeks in January I didn't walk due to having Covid, and for a couple of weeks in February she didn't walk, due to isolating and then having Covid herself. But in March we were both fine, and although we sometimes had to wrap up extra-warm, with woolly hats and scarves, it was good to get out first thing.

In addition to being cold, there was a fair amount of rain, so that the Salt Lake was about as full as it ever gets: 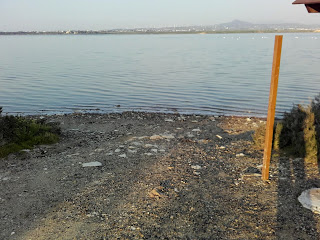 The picture doesn't really show it well, but usually there are several metres more of 'beach' before the water starts.

Flamingoes, of course, have been much in evidence, though never close enough for good pictures: 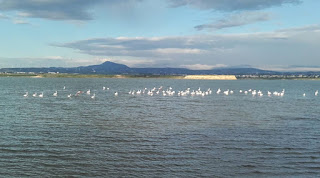 My freesias came out, over a week later than their usual date, and didn't last long, but they were pretty for a few days: 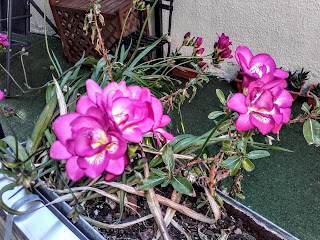 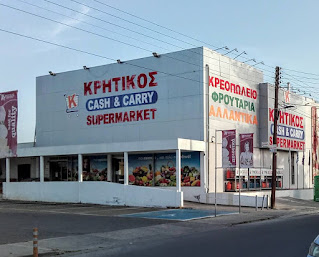 I wonder what its next incarnation will be... or whether it just isn't commercially viable to have a supermarket in a residential area like this one.
I don't even take as many photos of the cats as I used to. Alexander and Lady Jane are eight years old now, and Alex, at least, is just starting to slow down a little. He, like me, seems quite sensitive to both extremes of weather; he doesn't like it being cold, but he doesn't like heat either. Here he is, worn out after being outside in the unexpected warmth of April (and it was VERY hot for a couple of days - up to 27 degrees, with a dust storm from the Sahara) 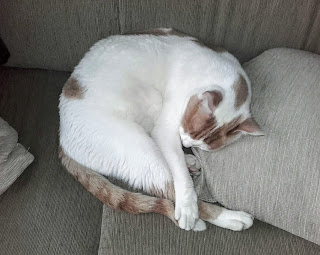 Jane, however, likes the heat so much that even in July and August she pointedly departs from any room where the air conditioning is turned on. She has spent much of the winter curled up in a beanbag right against a radiator. And even in early April, when I was, at last, shedding a layer or two, she was clearly hinting that she wanted the heating on again: 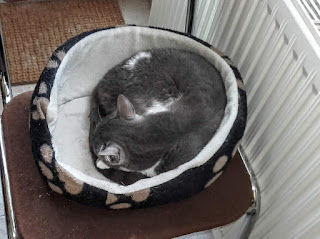 Yes, Jane is such an unusual cat that she actually sleeps in a bed that is intended for cats!
Posted by Sue at 20:57

It was so delightful to see ths post as I have been wondering how things are with you, Richard and the cats :) It's great to learn that your life is getting back to normal, albeit slowly. I have a feeling that the effects of this virus will be with us for many years to come, though my prayer is that it becomes like the flu. Enjoy the rest of the Spring. God bless.