A Long and Detailed Post about a 'Typical' Day.... part 5 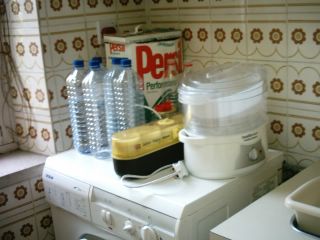 (The yogurt maker [and steamer, and bottles of water] on top of hte washing machine in our rather tastelessly tiled kitchen - not our taste!! It's a rental house....)

12.30 - Richard and Tim should be back in half an hour or so, so there's just time to read the various forums I belong to online and any more email that might have arrived in the meantime.

Did that - it took about ten minutes. Checked the BBC news site briefly, and the Cyprus weather page - they're still predicting rain for Friday and the weekend. I do hope they're right and that it's more than a few spots.

Not much that's new on the forums, and nothing I want to reply to! Remembered that I finished reading a book last night so that needs to be added to my books blog so went to do that, only to find that the main blogger page is down with an apology message from the engineers. So instead I read the latest entries from people whose blogs I enjoy... at least they're still showing. The technical glitch reminded me that sometimes entire databases do disappear, so I copied all my previous entries into a text document for keeping on my hard drive.

12.55 - went to get some bread from our local bakery, and some milk since we had nearly run out. I love the bakery - the smells are wonderful, the selection of bread excellent. We usually avoid the various cakes and pastries although sometimes guests are intrigued (and often treat us!) - if we ate them every day we'd put on vast amounts of weight. There's a refrigerated section too with dairy products, ham, humus (etc) and also some soft drinks. Very useful when we run out of milk as this bakery is open for about 14 hours every day other than Christmas and Greek Easter. We usually get through abpit a loaf of bread each day. Today I chose a brown oval one that I quite like - there weren't any of my favourite, a square brown loaf rather like those available in British bakeries.

When I got back Dan set the table and I phoned Richard to check that he and Tim were coming back shortly. Then sat down to have a quick look at this week's Sunday School lesson, just in case there was anything I need to do in advance. It looks like quite a nice one, about the disciples on the road to Emmaus after the Resurrection.

Then I washed some lettuce and cherry tomatoes for lunch, and realised the fridge was a bit over-crowded with leftovers from previous night's meals. I re-packed two portions of cauliflower cheese and half a portion of sausage-tomato bake in tubs and put them in the freezer, and we got out last night's leftover beef and mushroom pie, and cheese and onion pie, as we knew Tim would probably eat them for lunch.

1.20 - Tim and Richard were back, I washed some lettuce and tomatoes, and we had lunch. We almost always have a cold lunch (other than on Sundays) with bread, cheese, salads etc, and anything else we come across in the fridge. Sure enough, Tim ate his way through about 1/4 of the meat pie, and 1/2 the cheese pie... he loves pies! The rest of us ate sandwiches as usual. My favourite at present is marmite, cheese, cherry tomatoes and pickle.

We usually chat about all kinds of things around the table - today it was mostly about the theatre, talking about some people who booked it at the weekend but left it in a terrible mess, and some frustrations Richard's had at work this morning.

At the end of the meal Richard made coffee for himself and me, and blackcurrant and green tea for Daniel. Tim doesn't really like hot drinks.

2.00 - Richard went back to the office; Tim cleared the table and then did some piano practice; Dan was doing something on their computer. I went to take some photos of the garden and in looking out of the kitchen window noticed how bad the weeds are in the little patch of ground there... and also realised that the grass there (such as it is) quite badly needs cutting. So I did about 20 minutes' worth of weeding before I became too hot to stay outside (why, oh why can't I remember that I should always wear gardening gloves before pulling up nettles?!) and then washed up from lunch.

2.30 - Sat down to try again with my books blog, but the system is still down. Strange. Quickly read through the email that had arrived since this morning, and some which I hadn't read earlier. Checked the forums again - not much that's new. Read a few articles at the BBC news site - the earthquake in Indonesia on Monday has been absolutely devastating, even without the feared tsunami afterwards. Apparently over 1000 are dead. Terrible.

3.00 - Dan did some drum practice (much to the disgust of Sophia, his cat); Tim was reading mail and forums on his computer. I did about five minutes of juggling - just ordinary three-ball juggling. A couple of weeks ago I couldn't do more than four throws without dropping the balls or ending up with them all in my hands, but suddenly about a week ago something clicked and I did eight... now I can fairly easily do up to about 12 throws, and actually managed 18 one time today. Apparently it's opening up new neural pathways in my brain.... not sure if I'll manage any of the complex tricks and patterns Dan can do, but if I could get to 50 throws I'd feel I could say 'I can juggle'!

It's surprisingly tiring even though I juggle next to the bed so it's not too far to bend to pick up dropped balls. So after that I sat down to read my current Georgette Heyer novel for 25 minutes.
Posted by Sue at 10:12