A Long and Detailed Post about a 'Typical' Day.... part 6 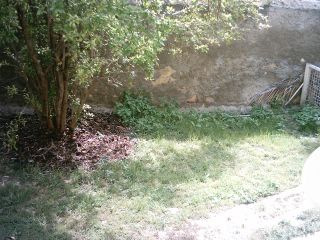 (The bit of garden outside our kitchen window, before weeding and cutting....)

3.30 - Margaret arrived for Tim's piano lesson, so we talked for a couple of minutes then I went to make her a cup of tea, and myself a green tea with blackcurrant. I put away the lunchtime washing up while waiting for the kettle to boil. I put the two pans of beans on to simmer, then went to check the laundry. The sheet and pillowcases were all dry, as were the tea-towels. So I folded the tea-towels and put them away (I rarely iron anything) and put the sheet back on Tim's bed, and distributed the pillowcases appropriately on the correct pillows. I also moved some of the towels to a line where they would get more breeze.

And then discovered to my amazement that it was already 4pm. It's unbelievable how long such little things take.

4.00 - got out the lawnmower and extension cable, and cut the grass/weed combination outside the kitchen. I didn't use the basket, it's much less effort if I don't have to keep emptying it, and if it does rain the 'mulch' of cut grass and weeds will possibly do some good. I had already picked the biggest of the weeds, including the ones in flower. After doing that patch, I cut the pathway down the side of the house and the tiny bit of grass at the front, and then seeing that some of the main 'lawn' in the back was looking a bit weedy - the bits we haven't done for a week - I cut some of the worst of those. However half an hour's mowing was quite sufficient, even without having to empty the basket; it's not exactly hot today but I realise it's muggy... not something I expect at this time of year, but perhaps it really does mean rain will be coming in the next few days.
Posted by Sue at 10:10