Yesterday I managed to get good photos of all the kittens other than the large orange one. This is the kitten Daniel named 'Darwin'. The reason was that this kitten was the largest and healthiest when we found them, and was extremely pushy about getting at the bottle - or whatever else I fed them. So he clearly believed in survival of the fittest! 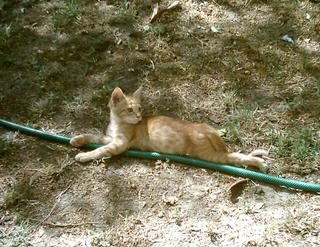 I managed to take this photo of him this morning. I do think he's a remarkably handsome kitten, and I'm not generally a fan of ginger tom-cats. He's still the biggest and strongest, but is very affectionate too.

A few minutes later we persuaded all seven of them to get inside the basket we'd borrowed (not a simple task, since one tried to get out each time we put another in!) and took them to the Cat Protection League shop. There I filled in some details, and left them, so they could be taken to the Animal Sanctuary in Pahpos.

It wasn't easy to say goodbye, but next week Richard and I will be away; although there will be some people staying here with Tim, he didn't want responsibility of having to feed all the kittens outside every day, although he'll happily feed our four adult cats on demand.

The lady in the shop was encouraging; she commented that our kittens looked in very good condition, and friendly too. She said that kittens like these are the most likely to find homes fairly easily. But even if they don't, cats have a wonderful time at the Sanctuary: they're free to come and go from their building, there are trees to climb, and plenty of space. So I'm sure they'll be fine. They weren't happy in the car but seemed bewildered more than upset at being put in the basket. I hope they've now arrived and are enjoying their new living accommodation.

Last night Darwin started making friends with one of the large feral cats that was wandering through our garden. While most of the adult cats have either hissed or ran away from the kittens, this one was being friendly too. Then it went through a hole in the fence... and Darwin followed. Certain confirmation that it was time for the kittens to move on. We couldn't have them indoors - certainly not all the time - and some Cypriots hate cats. There are awful cases every month of cats and kittens being poisoned around the island; one of the really horrible features of living here that I will never understand.
Posted by Sue at 15:10

For some reason your picture of Darwin is not coming up.

I hope they do find good homes. Her words sound encouraging.

Awww they're lovely. Wish I'd found your blog sooner. I'll go back and read their story. Can I link you? Here is my new one if you'd like to link it.
http://stepbystep-learningathome.blogspot.com/
Jodi

Lora - thanks for letting me know! I probably wouldn't have noticed, but sure enough the picture wasn't showing here today either, although it was there yesterday. Very odd. I've uploaded it again and hope you can see it now.