Another visit to Ikea and the Mall of Cyprus

I've always liked the Ikea style of furniture, but when we lived in the UK we only went there a couple of times. Perhaps because it was half an hour's drive to get there.

But we're big fans of Ikea here. It's been opened for a year in Cyprus, and it's half an hour's drive away... but we've already been three times. We went in December last year, when we bought various useful bits and pieces that we simply can't find anywhere else. We returned a few weeks later to buy a bookcase for our DVDs. And a smaller bookcase that we knew we would need somewhere. And some more bits and pieces... it's funny how we seem to go for one thing, and find several other items at excellent prices, which we didn't even realise we needed...

We went again in June, when we also visited the Mall of Cyprus. We were looking for blackout blinds, but - of course - bought a few other things too.

We finally put together the smaller bookcase just a couple of weeks ago. And when we'd done so, we knew that we could use the same size of bookcase in our dining room, where we had two large bookcases, and three small rattan ones. Unfortunately the cats think rattan bookcases are scratching posts, so they were getting progressively more and more destroyed.

We were also running out of space for our fiction library; it's probably only about 1000 books that we keep in the dining room (we keep most of the children's books downstairs in our guest flat) but they were getting squashed into the shelves. I was relying on other people borrowing them in order to have space for the ones that were left. When we were in the UK during the summer, I bought about twenty more fiction books... and there simply wasn't room for them.

So, we decided to splash out. We have a fund of money given us by various people at Christmas (and occasionally other times) which we're told to spend on something we WANT. Money given just to Richard generally goes on sailing things. Money given just for me usually goes on books. But when it's for both of us, we try and look for furniture or appliances that we both like.

So, we drove to Nicosia yesterday afternoon. First, we went to the Mall of Cyprus, where we popped into Carrefour... I had been thinking about having a slow cooker (aka crockpot) and we found one at an excellent price. Since it's Cyprus, we didn't have to choose between umpteen models and sizes: there was just one model. Two in stock. And since Morphy Richards is a good brand, we bought it. Rather bigger than I had intended, but that's not a bad thing. 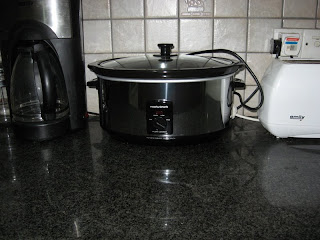 Then we drove to the next door car park, so we could go to Ikea. We found the bookcases we wanted; they were - slightly to our surprise - all in stock. We went fairly quickly through Ikea, so as to avoid spotting dozens of useful things that we had never thought of - although we did pick up a couple of very nice candle holders, and some photo frames which we had wanted.

However, instead of several small items, we saw a drop-leaf table that we both liked very much. It's exactly what we'd been thinking of for the space next to our freezer: we needed a table of some sort there to put desserts or drinks on when we have potluck meals, and as an extension for when we have more than ten people to a meal.

We got everything home. We struggled up the steps - Richard carrying most of it, since Tim is no longer here to help! - and then decided it would be best to make everything that evening, otherwise we would have boxes sitting around for weeks...

So Richard started with the table. 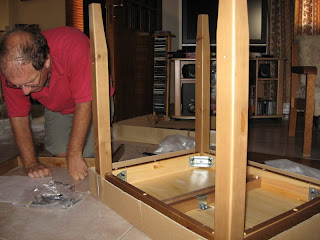 It was more complex than I had expected, but Ikea instructions are really very good, and he soon had it together. It looks exactly right, too. 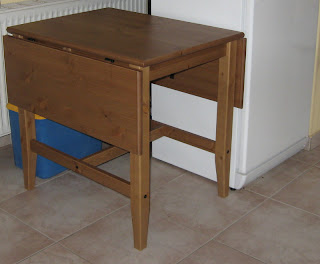 Then he started on the bookcases. Of course, the cats were very interested in all that was going on. Cleo started climbing in empty boxes, and batting about loose nails and screws. Tessie looked as if she was going to use one as a litter tray, so we put her outside quickly. And Sophia, as usual, wanted to be right where the action was: 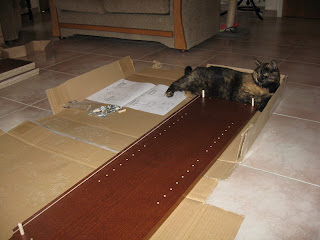 Once the first bookcase was made, I had to start moving the books around, a job I always enjoy doing. I suppose it took a couple of hours in all, but eventually we finished, and were very pleased with how the dining-room/library looks: 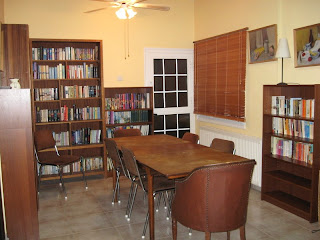 Two of the rattan bookcases will be moved to Richard's office guest accommodation, where they should survive at least a while longer since there are no cats there.

And the third one is - for now, anyway - sitting in an empty niche we had on our staircase. We'd tried putting a plant there, but it didn't survive. Richard has a bookcase in the bedroom with art and sailing books, but they were overflowing, so he's moved some of the art books to this rattan case: 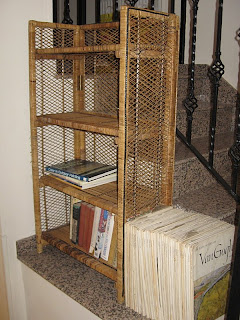 The cats aren't quite sure what to make of it. Perhaps they'll stop scratching it, since they don't often sit on the stairs.

Cleo and Tessie seem to be ignoring the new table and bookcases now they're installed as furniture, but Sophia is claiming them as her own: 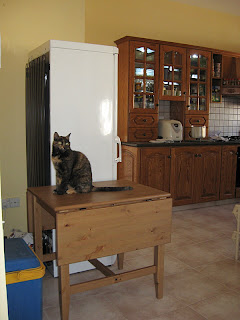 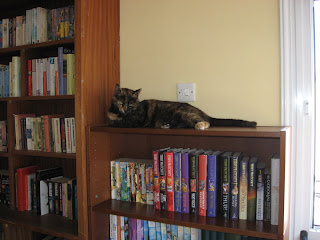 So agree with you about IKEA: our nearest is 100 miles away so we tend to indulge in those tempting small items on our infrequent visits. Does the Cyprus branch have a clearance area? We're often lucky there!