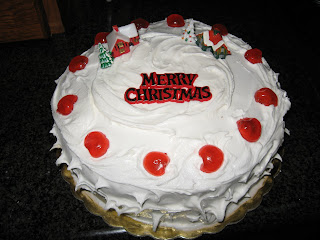 Yesterday, I iced our Christmas cake, and did my not-very-artistic person's approximation to decoration which at least gives it a bit of colour. I also made another 24 mince pies. I even wrapped the two presents that needed wrapping, and sorted out the various parcels that had arrived in the post.

I felt so organised!

All we had to do on Christmas Eve was collect our turkey from Metro, with a few other groceries and 'nibbles' for Christmas Day. And perhaps some laundry, since the mains water would be on. And the windows really need cleaning. Oh, and we cook the turkey on Christmas Eve, so we can slice it and then simply re-heat on Christmas Day, but Richard does that part. But really... Christmas this year was going to be very straightfoward, I thought. Five friends are coming to lunch, and then Richard has to collect two colleagues in the evening, who coming for a week; he'll bring them here for some cold food in the evening but that's no trouble at all. We would buy some crackers and nice cheeses at Metro, I thought, and there would be leftovers from lunch, and of course the Christmas cake.

No problem. Why do people get so stressed out, I wondered. In the evening we watched a DVD of 'A Christmas Carol', and then I slept soundly.

We left the house shortly after 8.30am to go to Metro. I was still feeling relaxed; I'd made a careful list of the things we needed to buy - some general, since we didn't go to the supermarket last Friday, and some for tomorrow and Friday (when just about everywhere will be closed).

We had ordered a 5kg turkey about ten days ago, so Richard stood in the queue by the meat counter, while I went around the supermarket collecting things from the list, and returning every few minutes to see how he was doing. He got chatting to a lady in the queue, and I managed to find everything I was looking for. Even fresh cranberries, which only appear in Cyprus for a few days prior to Christmas. So far so good.

Browsing the vegetable section, I looked in the bargain bins where they have ready-bagged cut-price offers. Evidently they're trying to get rid of a lot of things prior to shutting for two days, since there were three bags of very nice broccoli and a large bag of french beans just sitting there. I thought I could blanch and freeze them, so I picked them up too. And enough crackers to feed several large families. And some green paper napkins in case we had run out (we hadn't. When I got home I found an identical packet which I must have bought last time we were there for the same reason).

Finally, Richard got to the front of the queue, after waiting about forty minutes in all. It was the longest queue I'd ever seen in Metro! In previous years, he's gone on his own to collect the turkey, since we did our main shopping a few days earlier. But this year, everything seemed so simple.

When the turkey appeared, it didn't look very big. It was marked as 4.7kg, and looked like a very large chicken. Still, I thought, that must be about ten pounds, and I know the old calculation for turkey was 'one pound per person' of uncooked turkey. So it should be fine for seven. We could always do some sausages too, we thought. A pity not to have many leftovers, but never mind. Perhaps there weren't any bigger turkeys this year.

The bill was about as much as two weeks' worth of groceries, plus a little over, but given that we didn't shop last Friday, and won't be shopping this Friday, I thought that was pretty good.

It had taken us nearly two hours by the time we got home... an hour longer than usual. I was feeling a bit overwhelmed by the crowds and the lights, but wanted to go to our PO Box to check if any more cards had arrived. So we drove there, and sure enough there were several more cards. Plus a parcel (addressed, bizarrely, to our home rather than the PO Box... but this IS Cyprus, and the postal service is strangely efficient at times). And two slips of paper saying that parcels too big for the PO Box had arrived, so we would need to collect them from the Post Office itself.

Unfortunately, the Post Office was closed. A note was on the door saying it would be shut all of the 24th, 25th and 26th. And since it's also shut on Saturdays and Sundays, I won't be able to collect these last parcels until next Monday. Never mind, it will be nice to have some extra presents to look forward to, if that's what they are.

Then we went to the office guest flat, where Richard's work friends will be staying, and realised we would need to get some milk and bread for them, at least, since not even the bakeries will be open tomorrow.

By the time we got home it was noon... and the breadmaker had just pinged, so we had lunch early, around 12.30. And I realised I was very, very stressed. I hadn't done any laundry, or cleaned the bedrooms (which I usually do on Thursdays), or the cat litter. We had piled all the supermarket shopping on the kitchen counter-tops, other than that intended for fridge or freezer, and hadn't put any of them away. I had stupidly bought a pile of vegetables for blanching, the turkey didn't look very big at all, and I REALLY missed the boys. Particularly Tim, who has done all the Christmas cooking for the past few years!

We put away as much as we could. The cupboards and freezers are bulging. I started cutting up the french beans so I could at least get the blanching and freezing out of the way, and Richard walked around the corner to Orpahanides Express, so he could buy a few things for the work guests coming tomorrow.

When he got back, he said that in the meat section he saw several turkeys that were much bigger than the one we had bought, at a lower price per kilogram! He wondered if we should buy a bigger one, and freeze the one we bought at Metro for some other occasion - perhaps Easter. Orhpanides meat isn't as nice as Metro, but I was beginning to worry about the size of the Metro turkey too, so when I had finished the blanching of the vegetables, we both went to Orphanides Express. sure enough, the turkeys were MUCH bigger. There were four of them just sitting there, and the smallest said 6.7 kilograms. We ummed and aahed, and eventually chose one that looked a good shape. When weighed, it was actually a little over 9kg which in old money is around 20lb... a ridiculous amount for seven people, but should give plenty of leftovers.

I also found myself in that strange pre-Christmas mode of almost - but not quite - picking up all kinds of extra things, 'just in case'. Like frozen Southern fried chicken. Or frozen apple-and-custard strudel. Or a box of Magnum ice creams. It wasn't even as if I was feeling hungry (though they all looked unhealthily delicious) - just that feeling of 'Oh! We don't have anything like that in the freezer, maybe I should get one!' My rational self reminded my panicking self that the supermarkets are only shut for TWO DAYS and we have enough food in the house to last at least two weeks, probably considerably more.

So we only bought the turkey. Even that seemed like a slight aberration as we had already bought one a few hours earlier, but we managed to rationalise that one.

Richard made the stuffings - one lemon and mushroom, although he managed to forget the mushrooms, and one simple sausagemeat - and has put the turkey on. Of course, being a much larger one than we expected, it will take considerably longer to cook. We think it should be ready by about 9pm, which means he can start carving around 10pm... so much for a reasonably early night.

I still need to make some soup, which we're going to have as a starter for lunch tomorrow, and a trifle which I like as an alternative dessert on Christmas Day. And hang out the laundry and change the cat litter and then mop the floors...

All this has nothing whatsoever to do with the birth of our Saviour in a poor, and probably dirty stable, which is the single reason for our celebrating.

Happy Christmas, anyone who has manaqed to read this far.
Posted by Sue at 15:58

What amazes me, Sue, is that you have time to post this long blog! But perhas that's part of your de-stressing!! Happy Christmas, love Lynda & Andy x

Hope you've had a good nights rest and feel refreshed for your Christmas day. We wish you every blessing. I also see Troodos has snow! more than a dusting. Maybe a sign of more moisture for you. Merry Christmas!

Hope you've had a Merry Christmas!

Hi, we run a tourist discount card scheme in Cyprus and with the Euro being so lousy at the moment against the British pound this is a little good news for British tourists visiting Cyprus. We have partnered with several restaurants, car hire firms, shops and Diving Centres in Cyprus that will give you discounts. Please feel free to visit our website, www.MyTouristCard.com, and join our Facebook Group!

The card is used at Japanese, Brasilian, Cypriot, Italian and Mexican restaurants in Paphos. We have nearly 30 Diving Centers where the cards can be used and a number of hire car firms too.

Look forward to seeing you soon!