I was given a most unusual looking plant on Christmas Day: 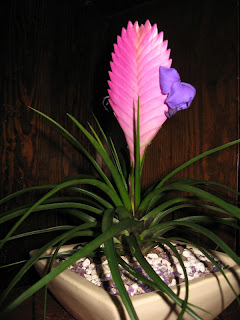 The leaves look vaguely like those of a spider plant, without the variegation. The pink centre piece looks stunning, though almost artificial. And then there were two purple flowers growing out of it, one each side.

The person who gave it to me said it was a bromeliad, apparently. Not that she knew anything about them, and I had only heard of them with reference to Terry Pratchett's 'Bromeliad' trilogy of books for children.

On Boxing Day, I looked up bromeliads in my three books about plants in Cyprus or the Mediterranean. No joy. Not even a mention.

Then I turned to my trusty old Readers Digest tome, 'Success with House Plants'. Several times I have found this actually more helpful than the books that are supposed to be about plants in the region.

Sure enough, they had a section on bromeliads. Apparently, this one was of the Tillandsia type. And when I looked those up, I was astounded to discover a picture that was clearly my plant: 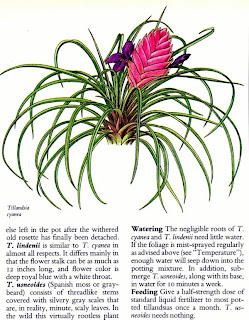 Since we're not very good with house plants, we usually put new plants outside after a few days, and they do much better. However, this plant - Tillandia Cyanea - does not, according to this book, tolerate temperatures of less than about 12C. It's significantly less than that overnight, at present, so we've left it inside, in the dining room. It doesn't need watering, just gentle spraying with a mister. So I bought one of those, and have been spraying it gently.

The two purple flowers fell off after a couple of days, but then a new one appeared, as shown in the photo above. So it's survived its first week...
Posted by Sue at 15:54