Another week rolls by...

A week ago it felt like months since Christmas. Now it's Friday again and I've really no idea what's happened to this week. I've done a bit of writing, and written reviews of the books I've finished, and been out to the local fruit shop, and chatted a bit with the family staying in our guest flat, and cooked, and cleaned ... all bits and pieces of the day which seem to add up to far more than they ought to.

We did file our UK taxes this week. At least, Richard did. I keep the books over the year and know where all the paperwork is, but he generates the reports and fills in the actual forms online. The deadline is the end of January. We always think about doing it much earlier - any time after last April would have been fine - but somehow it always gets left until at least mid-January.

A friend had her 40th birthday party last Saturday. As guests left, the women were given a long-stemmed red rose. I had to shorten the stem since we only had a smallish vase that was suitable. I didn't expect it to last very long, based on prior experience of roses in Cyprus, but here's how it looked on Wednesday: 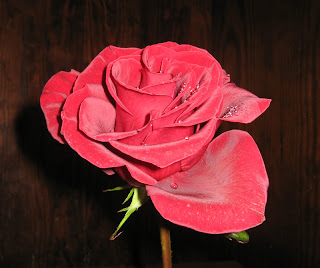 .. in case that doesn't look real, here it is from a bit further away: 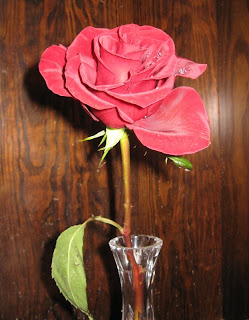 It's only today that I've had to throw it out at last.

It's raining again now, although not heavily. The weekend is forecast to be grey, but not too stormy. Just as well, since Richard will be in Limassol doing the practical part of the 'Day Skipper' course, which involves being out on a yacht.
Posted by Sue at 15:34