Christmas season comes to a close

We're not really into traditions in our household. We don't make a big thing of decorating the house for Christmas, although I suppose we do it much the same way each year. And we usually take the decorations down again on January 5th. I'm not sure why, other than that it IS traditional... and if we didn't take them down then, they'd probably hang around for weeks longer, while we stopped even noticing them.

So, on Monday evening, we took down the cards, even though a couple of them had only arrived that morning. They're sitting in a pile on a little table in my study, and will no doubt stay there until one of the cats knocks them over. I like to look through them once more, and I always hate throwing them away. But we are trying to cut down on clutter, and really don't want to keep an ever-increasing pile of cards in the house. Nobody seems to want used Christmas cards for crafts any more, and we don't even have paper recycling in Cyprus. So, while I hesitate about throwing them away, they'll sit collecting dust in a pile.

I removed the tree decorations, and Richard put away the lights and dismantled the tree, helped - or rather, hindered - by Sophia. Then I gathered up the other bits and pieces - mostly candles - and we put them all away. The whole process took about twenty minutes, and the living room looked a bit empty at the end.

I washed our two Christmas tablecloths today. When I've ironed them, they too can go away until next year. This morning I took apart the two jigsaw puzzles we did on Christmas afternoon, too.

Many years ago, a friend told us that in Anglican churches, when something happens two years in a row, it's immediately dubbed a tradition. Being good Anglicans, at least before we came to Cyprus, it is evidently now traditional in our household to have a new poinsettia during December. So about a week before Christmas, we went out to our local plant shop, and bought one: 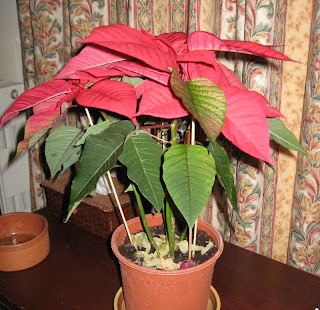 Of course, it's no longer a Christmas decoration. As of Monday night, it's just a house plant. And if it follows the traditions of its predecessors, it will continue to bloom red bracts until at least March, and will then stay green and flourishing until some time in December.

Yesterday was Epiphany, an important feast in the life of traditional church congregations, including the Greek Orthodox majority of Cyprus. It's also a public holiday. In Larnaka, there's a special ceremony in the morning, where a heavy and valuable cross is thrown into the sea, and several young men dive for it. The one who finds it is (in a strange mixture of folklore and religion) supposed to have good luck for the rest of the year. We went to see this, several years ago, but there wasn't much to see from a spectator point of view, so we haven't been again. Besides, it's a bit chilly.

Today, most of the schools returned after the Christmas break. Although in some countries, including Egypt, today is the one celebrated as Christmas Day. For them, the Christmas season goes on another couple of weeks, while for us it feels as if the New Year is starting properly. Regular activities will resume next week.
Posted by Sue at 20:36

I find it odd that poinsettias should be regarded as a Christmas decoration.

Here they usually decorate churches at Pentecost, when they serve as a reminder of the tongues of fire.

I suppose the obvious reason for poinsettias being Christmas decorations is that they're the traditional colours of scarlet and green.

But a more practical reason is likely to be that the bracts only go red during the winter. For you, Pentecost is in the winter. For us, it's early summer, while Christmas is in winter.

For some reason, Epiphany barely gets a mention over here.

We took down all our Christmas decorations today. Whew.