I wrote about building work in Larnaka in August, and I wrote a few weeks later about how the building work was continuing in September.

Then, I suppose I stopped noticing it on my weekly perambulations to the Post Office. There did not appear to be much progress, or anything particularly photogenic. Not that building work is exactly beautiful, but it was interesting to see dramatic changes, on the rare occasions when it actually looked dramatically different.

I didn't expect much would happen over the Christmas and New Year break, when just about everything closes down, some of it for over a week at a time. So I was pleasantly surprised this morning to see that the pedestrianised area, at least, appears to be almost finished: 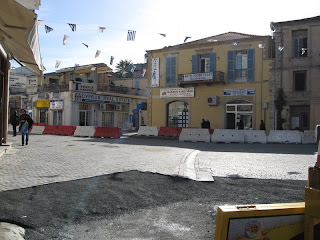 - and if it doesn't look very exciting, here's how approximately the same viewpoint looked back in September: 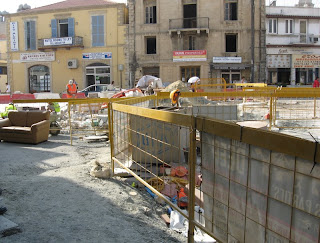 There's still, evidently, a lot to do. Turning and facing the opposite direction, another road is still inaccessible; there is also new scaffolding around the bank that's opposite the Post Office, though I don't know why: 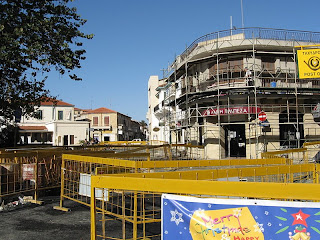 I wonder if they'll finish it all before this year's tourist season begins in about April...
Posted by Sue at 16:06

Larnaca, too! After they put the sewage lines in last year, I thought we were done with road works -- Nope. They hadn't finished, so now the other half of Paphos is dug up. Added to that, the town centre of Yerouskippou is still impassable, and I'm sure that's been going on for more than a year... it all just blurrs. I wonder what will be next...