Tim returns to Cyprus for a break

I'm not usually much use for anything after about 10.30pm, being very much an early bird rather than a night owl. But I could hardly let Richard go to the airport alone to meet our younger son, returning after eight months away. He's only in Cyprus for 12 days before he has to return to his studies in the UK.

We arrived at the airport about 11.40pm. We waited about fifteen minutes, then Richard went to move the car (since parking is free for 20 minutes, but it's quite possible to check out of the car park, then drive around and park again...) but during the time he was gone, Tim arrived.

By the time we got to bed it was about 12.45, which was WAY past my bedtime. Then I was awakened by Sophia at 6.15am. I had set my alarm for 6.30 anyway since Thursday is the day when I look after a home educated boy, who arrives at 8am.

We didn't do a whole lot today. It was very good to have Tim home again. 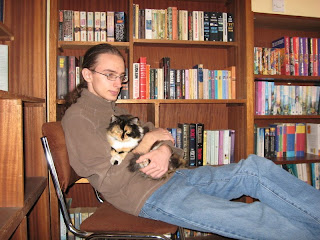 Tessie is pretty pleased about it too.

This afternoon Daniel came online for a while, and sent me a post and some photos to upload on his blog.

I've managed to stay awake all day, which is quite an achievement. We had a friend to supper, who needed to discuss several things with Tim, and that's probably a good thing or I would have faded much earlier. But now it's 10pm and since Sophia will, no doubt, wake me at 6.15am tomorrow, I need to get some sleep. Tim has a busy few days ahead of him.
Posted by Sue at 21:53

Hope you all have a great holiday together! Give our greetings to Tim as well as friends in your Friday night study.