A little hint of ecological awareness in Cyprus

Cyprus is not very good from the ecological point of view. There is almost no recycling, for instance. There is a lot of over-packaging in supermarkets. People waste water, even though it's severely limited many years, and run their air conditioners far cooler than necessary. They replace things rather than mending them, and prefer new cars to second-hand. The excellent thrift stores (we know of three in Larnaka, now) are mainly used by ex-pats and refugees rather than Cypriots.

It's cultural, of course. And so, if anything is going to change, it needs to come from Cypriot groups, in a way that makes people take notice.

A few months ago, we were surprised to receive a piece of junk mail informing us that Metro (our favourite supermarket) was 'going green'. A little ironic, given that this was printed in full colour on glossy light card, both sides (one in Greek, one in English), and delivered - I assume - to every mailbox in the town, where the majority would go straight into the bin.

Intrigued, I read it. Metro, it seems, had decided to make an ecologically sound long-lasting bag, which would be available for several euros (or equivalent in loyalty card points) so that people would not have to use the plastic carrier bags so much.

A good start. And, to be fair, Metro is a long way ahead of the other supermarkets in its supply of organic and health food produce, even though it seems limited compared to what we're used to in the UK.

We didn't buy one of these new 'green' bags, because I already have about half a dozen re-usable cloth bags which I take with me when walking to the local Froutaria, or Orphanides Express. But when we go to Metro, we like getting plastic carriers, since we re-use them as bin liners. In a country where toilet paper generally must not be flushed, it's important to have closed bathroom bins, emptied regularly. Supermarket carrier bags are ideal to line them.

I don't think the new green bags have really caught on. We go to Metro about once a fortnight, and haven't seen anyone toting one of these re-usable bags yet, although no doubt there are some people who bought them.

Today I was even more surprised to notice that the carrier bags at the tills no longer bore the blue Metro logo and text that we have become accustomed to. Instead, the logo was in a green circle, with the slogan 'eco-friendly Metro superstores' around it. 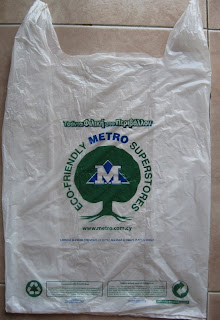 Looking a little closer, we saw in the little box at the bottom:

This bag is made of Polyethylene containing a special degrader. It is recyclable just like all plastics and has a limited life when left in the environment, since it degrades by light, oxygen and heat and then along with humidity it becomes food for microorganisms (just as happens with all natural elements, ie wood, leaves, branches etc).

We're a little cynical. The bags may be recyclable, but since there is nowhere to take plastic (or, for that matter, glass or paper) to be recycled in Cyprus, other than the army base, it's not a lot of help.

Moreover,'Limited life' could theoretically mean anything from a few years to a few hundred thousand years. Still, it seems like a step in the right direction. This kind of thing might help Metro customers to become a little more aware of the importance of environmental issues - and perhaps the bags do degrade more rapidly than the ones they used to use.

The only problem is that they are thinner than the old bags. Which means that they break more easily.

Which means that we needed to use nearly twice as many as we used to...
Posted by Sue at 16:40

A few years ago our government decided that plastic shopping bags thrown away were a threat to the environment, which was true. Supermarkets gave them away free, and people just discarded them anywhere.

So they ruled that plastic bags had to be thicker, and that people had to pay for them, so they would be encouraged to reuse them. The immediate effect was the closure of a number of plastic bag factories, with consequent loss of jobsd. We save plastic bags instead of throwing them away, but often forget to take them to the shops, so the number keeps growing. Becayse they are thicker, the new bags degrade slower than the old ones.

Our bishop comes from Cyprus. He is forever talking about the environment, and when visitors come from overseas he asks them to go round the parishes and speak on the environment, even if they know nothing about it. But when the visitors go to lunch with him there is bottled water, not tap water on the table (sometimes imported from Greece or Cyprus).