My neck is aching a bit this evening, and my right hand feels a bit sore. One of my fingers feels as if it's about to develop a blister. Why, you might ask? The reason is that although I do a great deal of writing, it's generally - to be literally accurate - typing. During the vast majority of the year, my hand-writing is minimal.

But, since I finally finished the newsletter on Thursday, Richard popped to the office to print 100 copies of it this morning since he'd been too busy yesterday. He then went to spend the rest of the day working on King Malu. I'd had grand ideas about writing all our Christmas cards before the end of November. And then during last week. I even thought I might post the ones to the UK at the start of last week. It didn't happen, of course. And the last posting day is creeping up.

I've posted cards as late as about 20th December sometimes, and they've still arrived on time, but I would really prefer to send them earlier. Like Monday. And since I really need to allocate a whole day to writing our Christmas cards and folding the newsletters, and we're out to lunch tomorrow, it had to be today.

Over the years, I've learned to be reasonably organised about this. It doesn't come naturally to me, so I have to be fairly strict about keeping lists of addresses - in my little red book - and who we've sent Christmas cards to each year - in a bigger red folder. While we were in the UK in September, I bought a good number of cards which I liked - better value and much nicer than most of what we can buy in Cyprus. And I recently ordered some more return address labels from Vistaprint - a company which apparently doesn't have a very good reputation, but I've always been pleased with the service.

So, around 11.30 this morning - after doing a bit of shopping, and checking email, and Facebook, I could procrastinate no longer. Since Richard wasn't coming home for lunch, I set everything out on the dining room table, along with the obligatory cup of coffee: 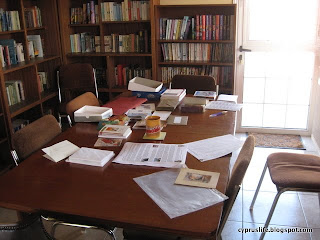 At 11.45 I started at the top of my typed list in the big red folder, and wrote some cards. Of course, I think about each person as I write them. Sometimes I add a little extra note. I fold a newsletter to put inside the card, then write the name of the person on the front - on a sticky label, if the envelope is too dark, seal the envelope, and put a return address label on the back.

By 12.15 my hand was already starting to ache a little. I had done fifteen. Richard printed me 100 newsletters, and I expected to use most of them. It was going to be a long day.

I took a five minute break, then continued for another half hour. I managed sixteen that time. Perhaps I'd got more into the routine of writing, folding, sealing and writing again. I made some cheese on toast, then - not wanting to disturb my endeavours - ate it in the computer room, while I read some more email.

Naturally the cats were most interested in what I was doing. They're not allowed on the table, of course. They know it. But it doesn't stop them: 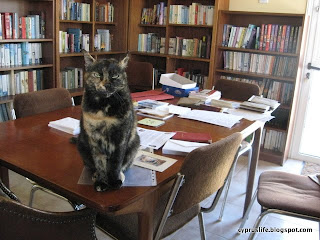 That was Sophia, at about 1.30, when I'd done another couple of batches. Then Cleo arrived; 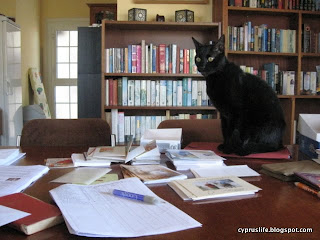 She is bright enough to know that the red folder is of supreme importance, so she sat on it. She didn't realise I'd taken out my reference list, so I could check off each name as I wrote the names on the envelopes.

I kept going. It wasn't until I had nearly finished that Tessie appeared, and decided it wasn't really all that interesting: 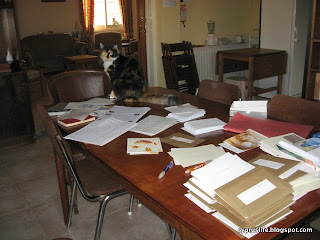 At last, they were all done. 69 cards to post to the UK on Monday, and 28 for local friends. I suppose it's a bit odd that we still send over twice as many to the UK as we do to here, even though we've now lived here for twelve years. But about twelve of the UK ones are for relatives, and another significant number are very dear friends we have known for more than twenty years, some of whom have come to stay with us in Cyprus. Then there are a handful of people who we met here, but who have now returned to the UK. And there are some people who we've mostly lost touch with, but I don't want to lose contact altogether. The list has reduced quite a bit since we've been here, as people have moved on and not given us their new addresses, or perhaps we haven't heard from them in years and finally decide to give up.

Having written all the cards, I took another short break. Then came the last stage: writing addresses on the ones that have to be posted. That's what made my neck start to ache. I put the cards in alphabetical order (approximately) then went through my address book, finding and copying the addresses. I suppose it could be more automated if I kept the addresses on computer and we printed labels, but we tried that before and it never seemed to work very well. Besides, I do like thinking of everyone again as I write their addresses.

Tessie decided I had been doing boring things for too long, and came to sit on the address book: 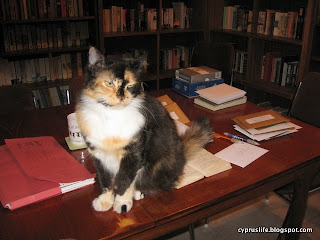 But I persuaded her that my lap was more comfortable, and finished the last few. 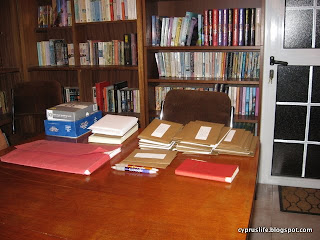 I have a large number of cards left over - probably enough for next year. What worries me, though, is that I have seven copies of the newsletter left. There should have been one in each envelope, and there are 97 of those. So I should only have three left. It's possible, of course, that I somehow managed to leave one out...I can't believe I left out four. And there's no way I'm going to open every envelope to find out!
Posted by Sue at 18:01

douse the lights for an hour

Thank you very much

Such orgqanized writing those letters and cards.
This year taking a week out to go to Iowa really upset and organized card writing I had. I am in a rushing state now, the tree, company, our family party, gifts, I can't believe I let myself get into such a state.
Christmas isn't supposed to be so hectic. It's peace and goodwill to all, everywhere.
So Merry Christmas and peace to you and your family.
Betty G