Yesterday, it was drizzling a little in the afternoon. But we've had so much rain recently that I thought nothing of it. Tim - who got back to Cyprus on Tuesday evening, for a couple of weeks - was out with some of the youth group, and arrived home around 6.15.

Five minutes later, we heard wind whistling around the house. We saw lightning flashes, although the thunder seemed to be a long way off. The wind got stronger, and we heard some crashes, as if things were being blown over. Then some hail fell, and finally rain. The lightning continued for at least half an hour, along with the wind. Tim was very glad that he got back when he did; I called Richard, who was still at the office, and he said he'd stay there until the rain eased, since he walked rather than driving.

The wind gradually died down, and Richard eventually got home about 8.30. There was a slight leak over the stairs, but not as bad as usual, so I didn't think any more about it.

Until this morning, when I popped out around 7.30am to buy some oranges, and was greeted by this site on our downstairs patio: 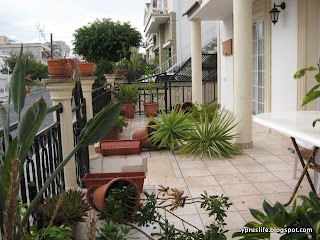 I righted the three plants which had blown over - they seemed undamaged - and decided to leave the cleaning of the dirt until it had dried up somewhat.

Half an hour later, there was a knock on the door. Richard's sailing buddy - another Tim - was there. He said he'd happened to drive past the main sailing club last night, and it looked as if there was a lot of devastation with high winds, and also high waves. He thought Richard's boat was undamaged, although somewhat blown over, but wanted to get down there to check, and perhaps help to right some of the damage. So Richard got up quickly, grabbed the camera and some rope, and headed down to the club.

He was relieved to find that his boat is indeed fine, as far as he could see, but, as he wrote on his Wayfarer blog, the high winds caused a fair bit of chaos and some damage. If you follow that link, you can see the photos he took.

I don't know if it was technically 'just' high winds, or a hurricane, or even a tornado. Whatever it was, it was short-lived but probably caused a great deal of devastation. Just having three plants knocked over was very minor.
Posted by Sue at 12:39

Thinking of you all and glad you didn't have too much damage. Saw Richards pictures. Thankful for the rain. Enjoy your holiday and many blessings to you all at the Christmas season!