Today was, once again, sunny and reasonably warm. I spent the morning, as I usually do on Wednesdays, cleaning the upstairs, making the bed with clean sheets/duvet cover, and also preparing food for lunch. The book-keeper at Richard's office is in on Wednesdays and usually comes home with him for a meal, so as well as making a fresh loaf of bread, I usually make some kind of bar cake (freezing the majority for future use) and perhaps some egg mayo.

In the afternoon, I spent a couple of hours with three home educated children, learning a new game: Carcassonne, hunters and gatherers. Their mother, who needed a break, had gone out for a walk with their youngest sister, and the fourth child in the family was fast asleep on the sofa.

It was the German edition of the game (the family are bilingual) so I couldn't have a quick look at the rules. Well, I could have done, but it wouldn't have helped me understand! However, since I do know how to play the ordinary Carcassonne game, it wasn't too difficult to pick up despite some slightly confusing explanations, and I learned more as we played. Not a bad game, although I think I slightly prefer the original Carcassonne.

When we finished - with surprisingly close scores for three of us - I thought I'd take a picture of the board. But the camera kept telling me it was low on battery; the screen on the back didn't show anything, and the flash didn't work. So I wasn't quite sure what - if anything - I took. None of the four photos which somehow got onto the camera really showed the final layout well, but this is probably the best: 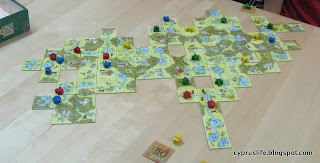 The theory is that these are the original inhabitants of Carcassonne, with forests which work roughly like cities, and rivers that work a little like roads, but have the addition of fish; the fields have deer, mammoths and tigers which also contribute to the game score. I didn't quite figure that bit out, so it's just as well I wasn't keeping the score.

Here are my young friends, who were my opponents in the game: 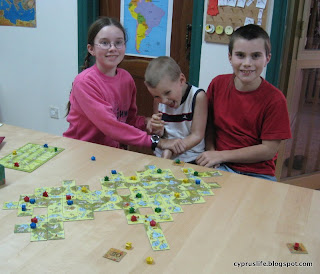 This evening I need to finish proof-reading the book Richard has been writing. I didn't do most of the things I had planned to do today - still no photos ordered, for instance. It didn't help that our Internet connection was off for most of the morning, and rather flakey this afternoon.
Posted by Sue at 18:14

There's a bit on the animal contribution here: http://www.boardgamegeek.com/thread/409004

The site itself seems to be quite good at giving overall descriptions of games and then commentators will answer questions.