Walk in the Salt Lake Park in Larnaka

Yesterday morning, after popping to Orphanides Express, and making some bolognese sauce to simmer in the slow-cooker all day, I went to collect three young friends to take for a walk while their parents were in a meeting. They live near the Salt Lake Park, so after some discussion we headed for the shortest direction, via the roads rather than the nature trail.

Our destination was the little playground. It's been vandalised, sadly, so the see-saw doesn't work and the 'den' is rather broken. But the swings are fine. The two little girls enjoyed the 'baby' swings in their various ways: 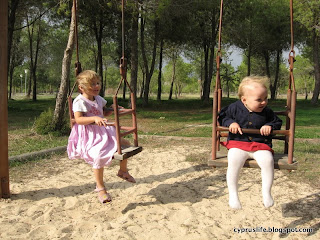 And their brother spent some time on the bigger swing. Then the two older ones played on the slide, and the climbing place, moving much too fast for me to attempt any photos. Then, getting bored of what they were 'supposed' to do, since they are home educated, they spent considerably longer dragging branches of trees to the broken den, trying to figure out what to do with an old wooden slat they found, and generally co-operating in all kinds of imaginative play.

There were no other children there at all. On one bench there was a man, smoking, who left soon after we arrived. On another bench were a young couple, probably teenagers, talking and cuddling. And there was a rather lonely looking dog whose ears pricked up any time anyone walked another dog through the park - he even went off to play with some of them - but then came back and lay down. He was quite friendly. I hope his owners find him and that he hasn't been abandoned.

After about an hour or so, the sky was turning grey and I had a sense that it was going to rain. Probably quite hard. 'No problem', said one of my young friends, 'the buggy has a rain-cover'. I pointed out that would be fine for the small person occupying the buggy, but the rest of us didn't want to get soaked. Or, at any rate, I didn't. We might be short of rain in Cyprus, and I'm happy when it does happen to rain... but that doesn't mean I want to be caught out in it.

So we headed back, on a rather circuitous route directed by the oldest child, where we saw that there is a significant amount of water in the Salt Lake now, although the foliage still all looks very brown: 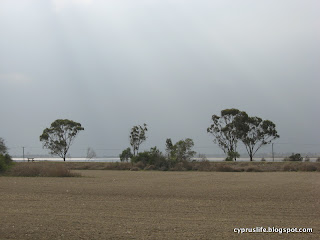 My camera was still playing up - I suppose I really ought to change the batteries, as it keeps telling me to, but so long as it continues to take pictures it seems a bit silly.
As we walked back - and that probably took another half hour with the lengthy route - the sky lightened. Perhaps I was wrong, I thought. Thankfully the children didn't seem to mind, and were happy enough to be going home. 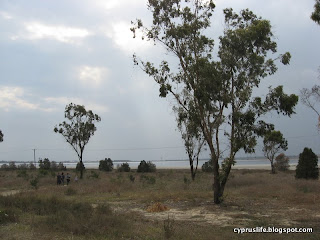 When we got back, their parents were still in their meeting so I suggested we play a game. They produced 'Labyrinth', something I vaguely remember playing with my sons when they were about seven or eight, although they got bored after a few games. It requires some logical and spatial awareness, but there isn't much scope for strategy, and one game is much like another.
As we played, we heard the roll of thunder. Then the sky darkened again, and it started to rain. Not very heavily at first but by the time we finished the game, it was pouring down. I stayed until it cleared up, and then went home, along streets that were full of huge puddles.
Posted by Sue at 17:36

The pictures are nice.. could have been brighter.. i guess its the aperature.. or something like that, when u allow more light into the camera.. anyways..nice blog