Yesterday, Richard returned from a day's sailing with a bag, stapled closed, which he had been given on the sea-front in Larnaka: 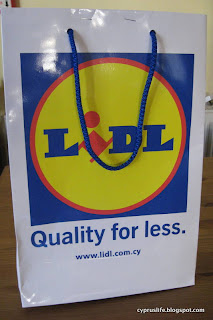 Apparently there is a new Lidl supermarket opening (or perhaps opened already) in Aradippou, not far from Larnaka.

He gave it to me to open. There wasn't exactly a huge amount inside... firstly, there was this magazine: 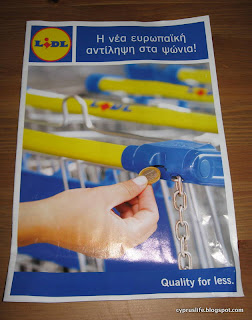 It was in both Greek and English, and basically giving the message that Lidl is good value and good quality. There were photos of some of the products being sold - but no prices. So I have no idea if Lidl will in fact be less expensive than the other supermarkets. One day when we're out in that direction we might pop in to see, but unless the prices are dramatically better than those in Metro or our local shops, it wouldn't be worth the extra petrol to drive out that distance.

Still, delving further into the bag, they did give us this useful shopping list pad: 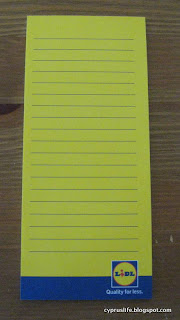 It has a magnet on the back, meaning I can keep it on the fridge.

There was also this key-ring, which is less useful since we have many plastic keyrings around: 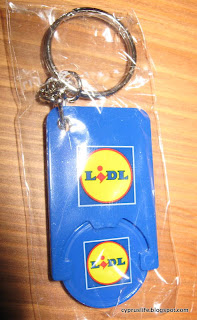 Best of all, there was some chocolate. Which we started immediately, before I even thought of taking photos... 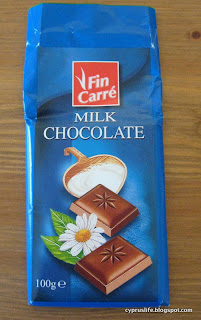 So, in gratitude for these unexpected free gifts, I thought the least I could do was to write about them.
Posted by Sue at 17:32

well I guess the key ring should be useful :) you should be able to use it to get a shopping cart without using a coin (looks so at least)

Regarded as at the bottom end of the market in GB.

It may be regarded a the bottom end of the market - but it has won a few which awards for its food.
We have one very local and I love the continental food which i so much cheaper and good quality.
I def recommend giving it a try!

It's good to see these types of stores opening with the recession in full swing. People once scoffed at these shops but times are changing. I see more and more 2nd hand and Euro shops popping up (around the Protaras area), keeps things competitive. Wonder if Lidl will be cheaper than Orphanides?