It's coming up to ten years since we moved into our house in Cyprus. It's more than ten years since we first saw it, and pondered, and prayed, and decided that it was the right house to buy. As, indeed, the past decade has amply demonstrated.

But back in January 2006, we didn't know what to expect. We didn't really know what we were looking for although we had a few important criteria. At first we tried to find a four-bedroomed house, but they were too expensive in the area we wanted to live. So we started looking at three-bedroomed houses... only to have an estate agent take us a three-storey house which had three bedrooms on the ground floor, which is a separate flat, AND three bedrooms on the top floor, as well as a good-sized room off the living room which could be used as another bedroom.

We fell in love with the kitchen immediately, we saw lots of potential in the main living area, and although the bedrooms seemed a bit small compared to the ones in our rental home, we knew they would be fine.

It's not that it was too small, but there was a huge sink unit that seemed to take up almost half the floor space, and there was mould growing around the bath sealant (although everything else was scrupulously clean): 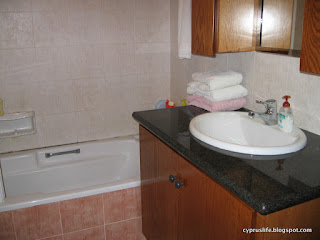 We really didn't like the colour, either. And whereas we could easily repaint other rooms (and did so before moving in) it's a lot more difficult to change bathroom tiles.

Thinking about the bathroom almost put us off the house entirely, but we went back for a second viewing. When we saw it again - and I took the above photo - we realised it wasn't as bad as we had remembered. We still didn't like the style or colours, but it was quite adequate; a great deal better than the one in our rental home (of which I don't think any of us ever took any photos).

Besides, with the amount we sold our UK house for, we had some 'change' when we went ahead with buying this one. We used some of it to buy important items such as a large freezer, and an electronic piano, and a television (since our previous one had quit some months previously), as well as a few extra bookcases. But we promised ourselves that once we'd settled in, we would do something about the bathroom.

Time, as it is wont to do, passed.

Richard replaced the sealant around the bath. 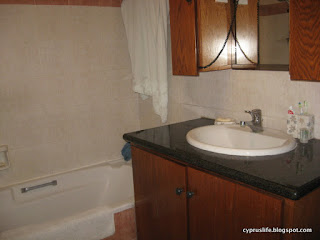 A few years ago, he managed to cut down the shower doors which were a bit broken and somewhat mouldy. 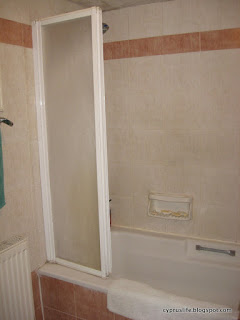 But it's continued to cause frustration. Nothing major, in the scheme of things, but it gets very damp, and the condensation turns to mould on the ceiling and wall tiles. I clean them regularly, but it grows back, and we don't always notice black on the ceiling. We could keep the window open, but it would be VERY cold in the winter. What it needs is an extractor fan... but that's not an easy thing to install without taking the bathroom apart.

The radiator, too, is extremely rusty. Each year it looks worse, and we wonder if it's going to leak. We muttered that it would be nice to have a heated towel rail...

We're not good at getting around to doing things, and time continued to pass, but we seriously needed a new shower on the ground floor (which we use as a guest apartment). The doors have been wonky since we moved in, and are getting worse. There's mould there too. And we have been given money specifically for the upkeep of the guest flat...

So at the end of last year, we started looking at new showers, and other bathroom fittings, curious to know what was available, and what the likely cost would be, and whether we would even be able to find anything suitable.

Finding a new shower for the guest flat wasn't too difficult, but we also wanted to know what might - theoretically - be possible in our main bathroom. We discussed having only a shower with no bath, to make it feel bigger. But occasionally we both like to take a bath, and it's important to have one for visiting children.

Visiting the bigger DIY stores was discouraging; nothing was inspiring, and we'd almost given up when we decided to look at a local bathroom supplies place. There we saw a corner bath, the kind of thing Richard had always rather craved, which would take up rather less space (or less awkward space, anyway) than our current bath.

We saw a sink we liked too, and Richard said he would be able to build a small, neat shelved unit to go around it.

I didn't think we needed a new loo; this is our current one: 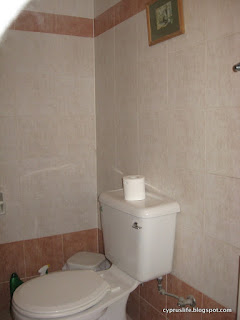 But they're not expensive, and this one has a lot of scale (and needs a new seat lid anyway)... so we thought that if we were buying the rest new, we should go ahead with that, too.

We contacted the builder who has done some other work on the house, and he gave us a quotation for doing the entire bathroom - removing all the tiles and old units, plumbing in the new ones to our specifications, re-painting the ceiling, doing any necessary plastering, putting up tiles... at least a week's expert work. It wasn't cheap but not unreasonable either.

Richard was eager to go ahead, but I was still resistant. Partly because I have an inherent dislike of spending money on myself (part of my Scottish heritage, perhaps) and also partly because I find it extremely stressful having builders in the house, no matter how friendly and efficient they are. There's inevitable noise, and dust, and chaos... I really, really dislike it.

But I'd been wanting to spend a couple of weeks in the UK visiting relatives, as it's over a year since we've been, and so the idea formed that I would go on my own, and Richard would get the bathroom done in my absence.

The vague idea turned to more concrete plans in the past month. My flights and other travel arrangements are booked, and one of our bedrooms is currently full of bathroom fittings and fixtures. We've chosen tiles and paint, and the builders are booked for this week. They're going to replace the guest flat shower first, and that should have been happening today.

This morning Richard had a message to say that they're going to start a day late. They're still finishing a previous job that took longer than expected.

I can't say I'm unhappy about that. That means they'll do the guest flat shower tomorrow, and probably won't start work on the main part of the house until Wednesday, by which time I'll be a few thousand kilometres away.

The only slight problem is that the heated towel rail (to replace the rusty radiator) was not in stock when Richard put the order in, so had to be ordered from abroad. And last week there was a port strike in Limassol. I gather it's now been called off, so we hope that shipments will be unpacked and will make their way to the relevant stores in time for us, and for the many other frustrated customers awaiting bathroom and other parts.

Tomorrow morning I'll take my last shower in the present bathroom. I don't think I'll have any regrets... it's served us well for the past ten years, but I'm not going to miss it.