Four-and-a-half years ago, I wrote about how we decided to move our landline phone and Internet provider from the national company CYTA to the somewhat newer Cablenet.  It saved us about ten euros per month, and gave us a faster Internet connection.

I still have the original documentation, which shows that we signed up for the 'cable/talk + surf + view 20M' package, at €44.64 per month. 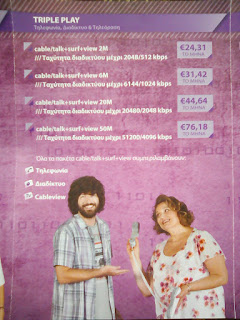 At the time, all the Cablenet packages had cable TV included, although we weren't in fact interested in that as we don't watch TV. We thought we might - but it hasn't happened. We wanted to keep our landline phone although we didn't use that much either. And when our last physical phone handset gave up working, we simply diverted the number to Richard's mobile phone; the landline was barely used, and we haven't missed it.

A couple of months after we took out the contract - which was 20M download, and 2M upload, though I'm not entirely certain what the two figures refer to - we were upgraded to 30M/3M, at a slightly inflated cost.  Perhaps that was part of the initial contract; I don't remember. Anyway, for a couple of years it worked well, and we were paying €46.90 per month for the package, plus the occasional few cents if someone dialled the landline and it was then transferred to Richard's mobile.

Shortly after that, we were upgraded again to 75M/5M, and then, earlier this year, 100M/6M. Paperwork arrived with the bill, sometimes, and we glanced at it, wondering if we would do better with a different package. Richard thought that perhaps he could transfer his mobile number to Cablenet as part of one of their new packages which included a mobile. But somehow we never got around to it.

The monthly price had gone up to €52.90 per month, which seemed rather on the high side, when compared to costs elsewhere. But a six euro increase - along with much faster speeds - didn't seem too bad in four years.

Then in the summer, we were away for over a month. Our Cablenet bill for August (it's always paid in advance) had arrived just before we flew, but by the time we collected it from the PO Box, I had turned my computer off. I knew I had until the end of the month to pay it, and since I was taking my laptop with me on our travels, I thought I could easily log into our bank before the end of the month, and pay online. So I popped the bill into my laptop case... and forgot about it.

The Internet connection wasn't great for our first couple of weeks away. But then we stayed for a week in a villa in Coronado, which had a reliable connection. I found the bill, and paid it online without any problem, despite it being about six days after the end of July.

Richard flew back to Cyprus towards the end of August, and visited our PO Box where he found our electricity and water bills, but no Cablenet bill. I was able to pay the other utilities, despite them also being rather late, but was surprised that there was no phone/Internet bill. Everything was working, and I didn't think about it until about ten days ago, when we went to check the PO Box again. Still no Cablenet bill.

So we went to the Cablenet office. A very helpful lady was able to print off our bill - both the one we should have received in August, and the one for September which had not yet arrived. When we asked why we hadn't had the September one, wondering if they had gone paperless and we'd missed something, she said it was because the August bill was paid late, and attracted a re-connection fee of five euros.

No, that didn't make any sense to us, either.

We asked if we could pay then. Yes, she said. Did we want to pay just the September bill (which included the reconnection fee), or the October one too?  I said we might as well pay them both at the same time, and produced my debit card.

Meanwhile, Richard had been looking at the special offer card that was sitting on the desk. 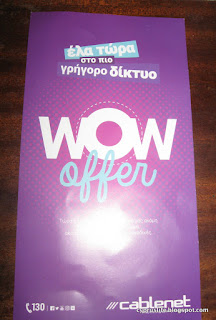 It was all rather confusing, with several different offers, nowhere near as straightforward as it was four and a half years ago.

I asked if we could have an Internet connection that didn't include TV, since we didn't use that, and the lady suggested a couple of options. However, both of them had rather slower upload speeds than we had been using - and for Richard's work, he likes that as fast as possible.

But after some discussion, we realised that we could get a connection that's almost as fast (5M rather than 6M upload) with the package labelled '2play 60M Purple 2', which costs €39.90/month. 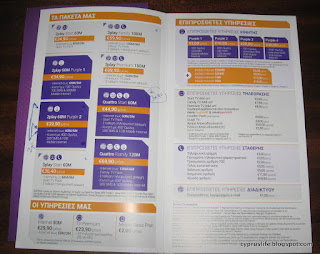 This has no TV, but does include, in addition to home Internet, a mobile phone with a monthly allowance of 400 minutes, 200 SMS and 1gig Internet.  There wouldn't be much point having my phone on this package, since I only spend about €15 per year on pay-as-you-go. I write perhaps thirty text messages in a month, but I don't think I use more than about 60 minutes a year of talking.  And even with my new-to-me smartphone, I don't want to use mobile Internet, other than, briefly, on wi-fi when I'm at home.

However, Richard's phone, which was on a CYTA contract, was costing about €20-30 per month. The basic contract was only €2.50 with what's considered low usage, but he paid another €8 or so for 300m mobile internet per month, and typically at least €10 in charges for calls and texts. Until recently he had used it mainly for work, but now he mostly uses online calling for work calls to people abroad, so the call/text charges to his mobile phone were mostly local. I had felt for a while that we should now be paying this rather than his work (which has been doing so)....

So once the Cablenet lady had established that his current contract doesn't include any minutes or SMS, she agreed that we would do much better with a new contract. It should save about thirty to forty euros per month.

We had to take in a former CYTA bill in order for the process to begin, but since we already had a Cablenet contract, there were no further charges. Richard was given a new sim card for his phone, and told to change it when he received a text message informing him of when the transfer was done.

On Monday morning he was sent an SMS telling him to start using the new sim card at noon on Tuesday...  and shortly after lunch on Tuesday, when he realised his CYTA connection was no longer working, he changed the card, and everything - so far - has worked perfectly.

All of which is a very long-winded post to say: it's well worth checking special offers with phone/internet companies.  Facilities change, and what seems like a great deal at the start of a contract may not be the best one a couple of years later.

Will we remember to check the options in another two years time....??  That remains to be seen.
Posted by Sue at 16:17