Walking along the Salt Lake trail in cooler Cyprus weather

As mentioned in a previous post, my friend Sheila and I resumed our early morning walking in the middle of September. It's a pleasant way to start the day, but in September we were often far too warm by the time we had finished, even if it was only 7am. I always feel as if September should be the start of Autumn, although I now know, intellectually, that it isn't in Cyprus. It's almost as hot as summer.

October continued warm at first too, with temperatures in the lower 30s Celcius, although the humidity was much reduced and the nights began to be a little cooler. Once or twice we rejoiced in a high of 29, only to have it a degree or two warmer the following day.

Then, on Wednesday, it rained.  There were gale warnings on parts of the island, and some places saw hailstones, but here in Larnaka it just rained. Not even for very long, but quite heavily.  The temperature dropped a degree or two, and it felt almost chilly overnight, under just a duvet cover. Thursday morning I over-slept, and didn't go outside until almost 6.45am.  Just as well, really, since it started pouring. Sheila and I sat under our outside tin roof on the swing, wondering if we would walk at all.

Then it stopped, and we saw a bit of blue sky, and decided to risk at least a short walk. The Salt Lake trail was quite muddy and I nearly slipped a couple of times. We had to negotiate our way around - or through - several long branches which had fallen with the rain: 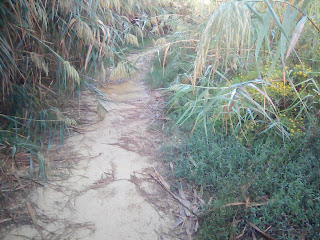 The Salt Lake had water in it, for the first time in months, and to our astonishment, we saw flamingoes on the water.  We wondered how they could possibly know that there was water here, as they fly in from various places for the winter in Cyprus. 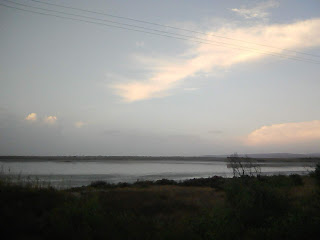 My phone doesn't take very sharp photos, so even if you click to enlarge this one, they won't look like more than a row of dots. But they were quite noisy.

There were puddles along the trail... 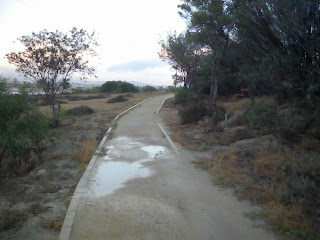 And some attractive cloud formations in the sky: 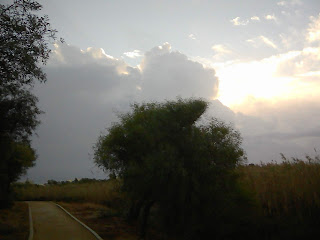 However, we didn't walk the entire trail, as we reached a place that was too wet to go past, so we returned, thankful to have stayed dry.

By Thursday evening I was feeling almost chilly, so I got out our thin duvet, and it was very nice to snuggle into it. We had the ceiling fan on for an hour or so, but then I turned it off.

On Friday evening, when we went out, I decided to wear jeans, and put away my shorts. I found my jogging trousers too for walking this morning. I was glad I did, as it was decidedly chilly first thing.

We walked the other way this time, almost to the Airport Road, and saw more flamingoes in the distance: 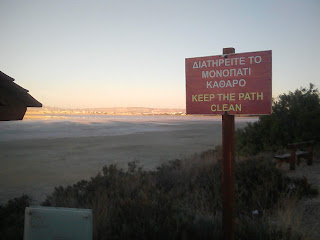 Tonight we put the clocks back throughout Europe, so the early mornings will be lighter, but the it will get dark quite early in the evenings. I'm glad it's a little cooler by the end of October, but am aware that Autumn is a short, almost non-existent season here in Cyprus.  All too soon we'll be wearing a couple of layers of warm sweaters, wanting the thicker duvet, and getting our central heating serviced.