More road works in our area

It's more than seven years ago that builders started digging up roads in Larnaca (and, we assume, other towns around Cyprus) in order to instal the new sewage pipes. The ones for storm drainage seem to have taken effect, and despite an extremely wet winter we have not seen any flooded streets in our neighbourhood.

Our street had its pipes installed in September 2011. Richard asked one of the builders when they expected the houses to be connected to the massive new mains drainage system, and was told, 'about five years'. He thought, at first, that the builder (whose English was not entirely fluent) had mistaken the period, and meant 'months'. I was more cynical. I reckoned five years was probably an optimistic estimate.

It turned out that I was right. Five years later, we had heard nothing. It wasn't until this time about a year ago that we received our official letter telling us that we needed to get our septic tank sealed, and the connections made so that we could be joined to the main drainage. The letter was all in somewhat complex Greek, but Google Translate is pretty good these days, and I can type Greek almost as fast as I type in English.

The main part of the letter said (in translation):

Please be advised that the sewer council of Larnaka (SAL) has completed the construction of the drainage system in your area and you can proceed with the connection of your premises after first submitting a request and obtaining the required permit. The application should be submitted on the attached form.

The SAL undertakes that the construction license will be issued as soon as possible, meaning that the application will be complete and accompanied by all required documents and documents. Then, with your own contractor and on the basis of the license you secure, build the private construction of your building. The Technical Inspector of the SAL will carry out an on-the-spot check on your contractor's (or your own) presence as soon as possible after your call. If the private building sub-building meets the technical specifications of the SAL, the Technical Inspector will issue the consent to link your property to the sewerage system.

Submitting an ΙΥΟ license and obtaining consent for a connection is also mandatory even where the private system is built.

For your convenience, we attach all the information you need to submit your application for an IYO, that is, the application form and the technical specifications. We furthermore inform you that the relevant information and these documents can also be found on the website www.lsdb.org.cy

If you have submitted an application for the construction of a IYO and you have obtained an IYO construction license and a certificate of consent for the connection of your premises, please ignore this letter.

It is noted that the connection of your premises is mandatory and must be completed within six months from the date of notification, ie until 08/06/2018.


It all sounded rather confusing, and we didn't do anything for the first few weeks. But then gradually our neighbours started having extensive (and very noisy) digging done. So Richard contacted a friend to ask who she used as a contractor. We were given a contact number, and a helpful guy came over to look at what we have currently. He explained that first we had to employ an architect to draw a detailed plan, then that had to be submitted to the sewage board for approval. They would grant a license, and we could then employ a builder he would recommend to do the work.

He told us that there was a long queue for this, and no, it couldn't possibly be done by the end of June, but that didn't matter at all. We said we would be away for six weeks over the summer, and he shrugged and said that nothing would happen in July and August anyway, so we didn't need to worry about it till the autumn.

A very competent architect came over, took extensive notes, and went away. A couple of weeks later she brought us the plans and charged us eighty euros. It seemed like a reasonable fee for some highly detailed drawings. She said that she had already submitted the plans to the relevant board, and gave us the reference number.

Summer came and went, and by the end of September we had heard nothing. So Richard phoned the number we were given by the architect. He was told that yes, our application was in process, and we should hear something by the end of the year.

Sure enough, last Monday there was another letter in our mailbox. 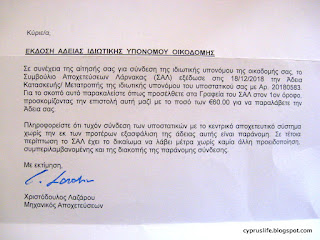 This one (according to Google Translate, again) told us that our application had been accepted, and that we had to go to the sewerage board to collect our license. It would cost us 60 euros, and after collecting it we should employ a builder to make our connections. At last!

It was rather a busy week, so it wasn't until Friday that we went to the sewage office. It was a bit complicated to find, but well-signed: 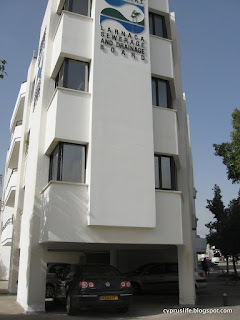 The letter told us to go to the first floor, so we did that, and handed over sixty euros. We were given a receipt and told to go to the second floor, where we were finally given our sewerage connection license. It says that it was actually granted on December 17th, but the letter was not written until January 3rd, and did not arrive in our mailbox until nearly three weeks later - we have no idea why the internal Cyprus post is so slow, but this is not unusual.

Richard phoned the original contact in the afternoon, who said he would come over with the builder soon, to give us a quote, and then, hopefully, the work can start.

All of which is great, even if it has taken significantly longer than usual.

But... this is Cyprus. Nothing is ever straightforward.

On Tuesday, there was another letter in our mailbox. This one was just a brief notification: 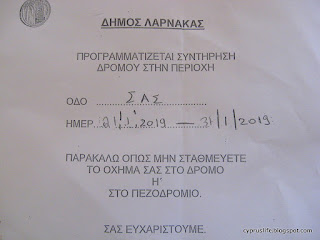 The word 'ΟΔΟ' means 'street', so we were amused that instead of putting in our street name, whoever filled this in merely put 'ΣΑΣ' (which means 'your').

We were less amused that this turns out to be a notification that our street is going to be resurfaced.  Finally.  Over seven years since it was given its temporary resurfacing after the initial digging for sewers.  And then we will be employing someone to dig part of it up again in order to make our connection.

On Wednesday and Thursday last week the former surface was dug up and the rubble removed, leaving it like this: 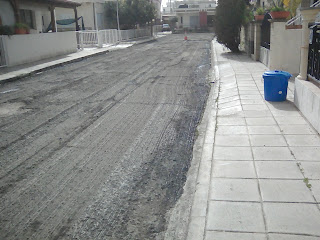 Some other streets in the neighbourhood have also had their surfaces removed, so we assume they are finishing that process before starting the resurfacing. It will be very nice to have roads that are less bumpy, and look smarter...

Until our builders arrive and dig it up again.
Posted by Sue at 16:16