New restrictions in Cyprus for November

Yesterday I refreshed various news sites on my browser several times. Partly, out of mild curiosity, to see if anything had progressed on the other site of the Atlantic. It hadn't.

But also in part because we knew that the government here was meeting to discuss new measures to restrict the spread of Covid-19.  Cyprus was doing pretty well earlier in the year, with a very strict lockdown in the spring, and gradual return to - almost - normal life during the summer.

However, we were aware that countries in the Western part of Europe were seeing seriously high numbers of new cases again, from about mid-September onwards. So it wasn't really a surprise when it started happening in Cyprus too.  Here's how the graph from the Worldometer site looks at present: 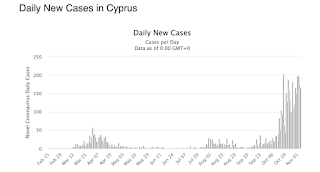 In many of the other European countries, the big numbers currently were partly due to increased testing. Or, rather, then lower numbers shown in the spring were due to lack of extensive testing.  But in Cyprus they implemented a track-and-trace system pretty quickly. They determined where the first cases came into the country, and in every case, at least during March, they knew exactly where the virus had come from, and were able to test and isolate known contacts.
The small spike in August wasn't considered too serious; it wasn't due to tourists, who began coming to the island again when the airports opened to visitors again in mid-August, but in many cases due to residents returning from seeing family and friends elsewhere - mostly Greece, but some in the UK and other countries.
But since the middle of October, there have been far more cases than there were in the spring. In the past couple of weeks, between 100 and 200 cases have been reported every day; some from contact tracing, but mostly from 'private initiative' - people with symptoms going to get tested.  There are still very few discovered at airports. It's clear that the virus has a hold in the community, and can no longer be suppressed by individuals self-isolating.
If you think 100-200 still sounds like very small numbers, remember that this is an island with a population (in the south) of less than a million.  Many of the bigger European countries have populations of between 60 and 70 million.  So it's equivalent to between 6000 and 14000 cases in a country with 60 or 70 times the population.
Part of the problem is that some people have violated quarantine rules; part of the problem is that people, often younger ones, but not exclusively, assume they are not vulnerable, and continue meeting.  Not everyone knows or understands what is and isn't allowed, and even in this little country there are people who believe Covid-19 doesn't exist, or that it's no worse than an ordinary cold.
Not many people here have died of Covid in Cyprus; the rate here is much lower than many other places, but the number of folk in hospital is increasing, and there aren't all that many allocated beds. So it was clear that new measures had to be taken, and last night the government met with the health advisors, and came up with new regulations.
It's not another lockdown, as we had feared, though perhaps it should have been.  Schools are still open, shops and restaurants are still open, though with some restrictions. Churches can still meet, albeit with masks, distancing and limited numbers, as has been the case for the past few weeks.
Here's the link to the full list of current restrictions, though many of them are not new:  Press Release about the new government regulations
Limassol and Paphos have stricter measures, as they have had the most cases recently.  So after spending most of the day wondering if we'd be able to see our friends within the next month, and go out for walks, there are in fact very few changes as far as we are concerned. Rules about conferences and weddings don't affect us. The curfew from 11pm to 5am is not a problem at all.  We can still have up to ten people (including us) in our house, and we can eat at a restaurant, should we wish to, so long as we're not in a group of more than six.
It's been a bit complicated working out what to do with the local Christian writing group, which has more than ten members, but we've found compromises - and this month is no different, regulation-wise, from last month. Indeed, there's just ONE thing on that list which affects me personally:

Back in March, this particular regulation related to people of 60 and above.  But back in March, I only shopped once a week, and went in the afternoon, so it wasn't relevant. I turned 60 towards the end of April, and then during the summer months started doing my local shopping between 6.00 and 7.00am as I normally do.  I think the rule was rescinded, but it was introduced again a week or two back. At the froutaria nobody asked me for my ID, and as there were only ever a handful of people in the shop, I guess it didn't matter much anyway. I'm pretty sure there were people there who were considerably younger than I am.
But now the limit is 65.  So I am no longer eligible to shop first thing, when it's peaceful. Just as well that the weather has turned much cooler in the past couple of days, so it shouldn't be a problem to shop later; I'm unlikely to want to go anywhere between 1pm and 2pm, so that bit shouldn't affect us.
Still, in the scheme of things that's very minor.  We can still have friends over, we can still go to church services, we can still go out and about.  We hope and pray that these restrictions will make a difference - the Cyprus President made a speech, last night, appealing to people to follow the rules so that we can all benefit from more freedom in December, and next year.
Posted by Sue at 15:43