We're sadly resigned to the fact that we won't be able to see our sons, or grandchildren, or any other relatives at Christmas this year. But the cooler weather reminded me that it's time to bake this year's Christmas cake. We hope we'll still be able to have local friends over during the Christmas period and early January - if not, we'll be eating it all ourselves. I usually only have a couple of slices...

I thought about making it on Tuesday, but I didn't have enough dried fruit. I bought some more on Wednesday morning, thinking I would make it on Wednesday... then remembered that the fruit has to be soaked overnight in a few tablespoons of brandy.

So I weighed the fruit and left it soaking overnight, and for most of Thursday: 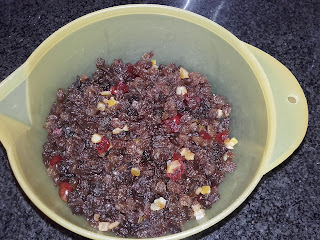 The recipe I use every year is, approximately, 'Delia's Celebration cake'.  I say 'approximately' because:
But, other than all those, I follow the recipe fairly closely.
I did remember to use a large mixing bowl, something I have forgotten at times n the past. Here's the first stage, after beating the spread with the brown sugar: 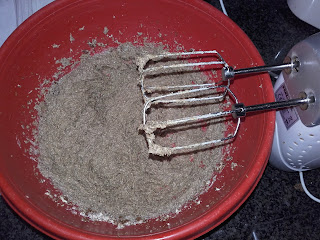 At that point, I realised I had to find a suitable cake tin, and line it. I checked last year's photobook and saw that I made a square cake last year. So, for variety, this year's is round.  I only have one deep 20cm round tin, and it doesn't have a loose base, so it was important to line it.
One of the few things I recall clearly from 'domestic science' at my secondary school is the way to line a cake tin, by folding greaseproof paper in half, then clipping a little trim all the way around to make it fit neatly underneath the round piece cut for the base. 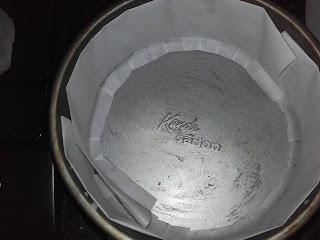 The rest of the cake is fairly standard - beat in the other 'wet' ingredients, gently fold in the dry ones with the fruit, and spoon it all into the prepared tin. I use a silicon spatula to make sure every last scrap of cake mixture is used: 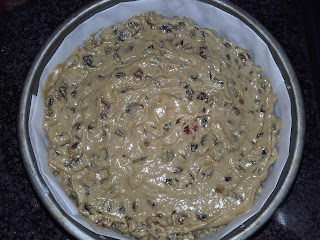 Since, by this stage, our evening meal was in the oven, cooking at a rather higher temperature than is appropriate for a cake, I left it sitting on the work surface for half an hour or so, then put it in the oven at around 6.45pm when we started to eat, after turning the heat down appropriately and waiting a few minutes for the oven temperature to reduce.
The recipe says it should take four hours - in mine it says not to look until at least three hours, although the one I linked to says not even to check it until it's been in for four hours. But I've had Christmas cakes rather over-cooked and dry, in the past, even starting to burn on top. We prefer ours rather moister.  So I checked it after just two hours, and it seemed to be almost done.  It was firm on the top, slightly springy, and coming away from the sides. I turned the heat down a bit more and left it in for another half hour or so,  and then took it out to cool.
I certainly hope it's sufficiently cooked, but it's never been a problem in the past.  I left it overnight in the oven (turned off) to cool down fully, then this morning wrapped it in foil and put it in an airtight container to mature. I'll pour a little brandy into the bottom a couple of times - if I remember - and then put almond paste and royal icing (home made, of course) on in the week before Christmas.
That's about all I need to do at this stage. I still have a Christmas pudding left from last year, and over half the mincemeat I made last year, so I won't do any more. All family presents get ordered online, and I usually make calendars for a few folk, so those need to be organised and ordered.  But there's no urgency there. I hope.
We went to SuperHome Centre this morning to buy a couple of things, and were startled to see Christmas displays everywhere - but shouldn't have been surprised, really.  There were lots and lots of little scenic models with moving parts, some of them at extortionate price, others more reasonable. However none of them appealed. All the cute (and the not-so-cute) Christmas scenes, with skaters, or playgrounds or other snowy (and entirely un-Cypriot) scenes seemed to feature large, jolly caricatured Santas along with the other little figures.
Our cats would probably be fascinated by something like that... which is another excellent reasons for not having one.
Posted by Sue at 16:04