I never liked sports when I was at school. All that running up and down, trying to get goals, or hit a ball over a net... it seemed entirely pointless. And I didn't much like the competitive aspect, either. That might sound odd for someone who thoroughly enjoys board and card games, but then one can't have a friendly chat while trying to play hockey or netball, or even tennis.

I didn't like swimming, either, and I wasn't much good at gym. I did like modern dance, when we did that; I was in the Scottish Country Dancing club, too, and took over running it when I was fourteen or fifteen. That's quite energetic, so, added to my walk from the bus stop (about a mile) each afternoon, and the enforced team sports, I probably kept reasonably fit as a teenager.

Fast forward to the late 1980s when I was married with two young children, and I walked miles - to and from local shops, to and from playgroups and toddler groups and eventually school. It was no more than about a mile each way to each place, but if I'd had a pedometer I'm sure I'd have registered at least five or six miles each day.

When we moved to the US for two years, with no local shops within walking distance, and no playgroups, my walking was limited to once a day to and from my older son's school.  I did feel unfit at times, but when we moved back to the UK in 1994, the boys joined Cubs/Scouts and a local choir. They also both started piano lessons. So I did a lot more walking, and became rather fitter.

Then we moved to Cyprus. The heat precluded much walking, and we educated the boys at home. We walked to and from church activities, but the church we attended for the first eight or nine years was only about half a kilometre from our home. I did some gardening, mostly in vain as it was a huge and neglected plot, so keeping the weeds down was impossible. 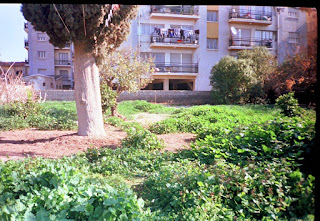 We'd got into the habit of doing a big supermarket shop, by car, once a week when we were in the United States, and we'd kept that going during the busy three years back in the UK, and for our first few years in Cyprus. It took me a long time to feel settled and to discover local shops (other than the excellent Perseus bakery, just around the corner, where we bought a lot of our bread). Before long the boys were old enough to walk to and from their local activities without an accompanying parent - and it was all too easy to become something of a couch potato.

A couple of times I acquired pedometers, thinking that if I could track the number of steps I took each day, I might feel more motivated to be a little more active. One of them was a freebie, the other bought inexpensively on special offer. I didn't get along with either of them. One broke rather quickly, the other didn't seem to track my steps at all accurately. Not even close.

When we moved in 2006, from a large bungalow to a three-storey house, we discovered muscles we had almost lost the use of as we ran up and down hundreds of steps over the first few days.  Our home education days were just about over and we were soon to be empty nesters. I discovered some excellent local shops, meaning we didn't have to go to a supermarket every week, and I would sometimes walk to a shop before the heat of the day. But it was minimal, and I felt extremely out of condition.

So it was a good thing that I started walking regularly with my friend Sheila a little over eight years ago. We mostly walked either 4km or 8km, depending on the time, as she lived very close to the trail, and we weren't more than a kilometre away. It took me a few weeks to feel energised and able to chat while walking briskly. She's now moved a bit further away, and we only ever walk 4km on the trail now,  but I'm happy to say that we've continued walking together, albeit with breaks for the summer. Then of course we couldn't walk at all over the lockdown period in April and May.

At the start of this year, I acquired a smartphone. I installed a step-counter, and at first was a little obsessive with it, wondering if I could do 10,000 steps every day, as was a trend some years ago. I quickly realised that, for me, this is unrealistic. When I walk with Sheila, I typically do about 8.000 steps so on those days - like today - I do usually get close to 10,000 by the end of the day.  Here's how it looked an hour or so ago: 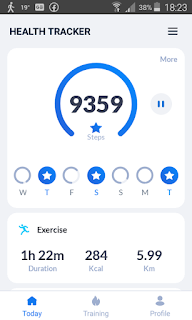 If I reach 9950 by the end of the day, I might walk an extra couple of times around the room so as to pass 10k, but since that's not really serious exercise it's a bit pointless.  On days when I don't leave the house, I only do about 2,000 steps around the house, doing normal cooking, laundry etc. I was also walking locally, including popping into the local fruitaria around 6.30am two or three times a week, but with the latest anti-Covid regulations I can't go there before 10.00am as I'm not yet 65.  I sometimes do go for a short walk around a few blocks, but even though I only set my daily target as 5,000 steps, I don't always even manage that.

I've read several articles, all saying that 10,000 steps a day is a good goal, more than that for people who want to lose weight. One I saw recently said that the most important thing is that at least 2,000 steps per day is done 'briskly' - and most of my walking is faster than 100 steps per minute, so apparently that's a good thing.

During the strictest lockdown period when my exercise was limited to walking up and down our rather small side yard, I only managed an average of around 3,000 steps per day.  But now the weather's cooler and I'm back to walking part of the Salt Lake trail three times a week, it's looking better. Here's the first week of November: 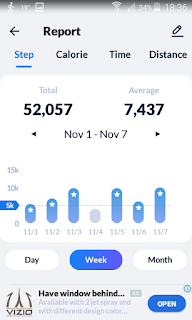 (I had to Google to find out how to take screenshots on my phone, and then had trouble uploading them... but eventually it worked)

We walked this morning, and were pleased to see that, with the recent rains, the Salt Lake is looking a little fuller than it was: 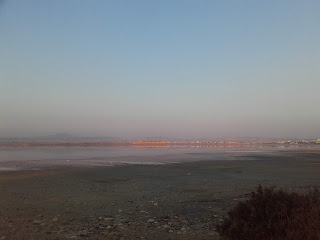