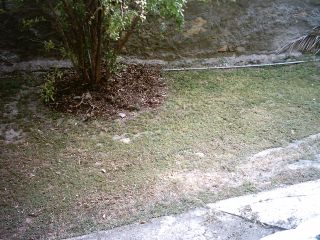 (the bit outside the kitchen window after weeding and cutting)

4.30 - I put the lawnmower and cable away in time to say goodbye to Margaret and offer her a few lemons. We have four trees all producing magnificently this year.

Then I topped up the water in the simmering beans, and came to sit down for a few minutes to check email and see if blogger was working yet... alas, no change.

4.45 - Made the chicken mixture and put that on to simmer gently, washed potatoes and cut up some potato wedges, transferred some of the mixed beans to a smaller pan to cook the bean bake (it should have been in the oven but I find works as well on the stove top) and left the rest to cool so I can bag and freeze them later. The soya beans are still fairly hard so they can have another hour or so simmering.

Went to check the laundry and found most of the clothes dry, so I did what I usually do: fold all of one person's clean washing over my arm as I unpeg, then go and deposit it in a pile on that person's bed. Then repeat the process with another person. It might take longer initially than doing the whole lot in one go, but not having to sort it after bringing it in saves time in the long run - and piling them roughly folded means that the mostly don't need ironing - they just go straight away. Or sit on the person's chest-of-drawers, depending who it is!

Then I moved the remaining few items around on the lines so they'll get the best of the breeze overnight. Checked the yogurt.. they seem to be nicely set so I switched the machine off to cool down.

And just that - getting a simple meal on to cook and bringing in the laundry has taken me 45 minutes! I can't believe it would take so long!

5.30 - Dan is back from whatever he was doing at the theatre - either helping with the little ones' class or manning the desk. He's now doing his clarinet practice. Tim is busy at their computer. Blogger STILL isn't working!

Replied to a few emails on various lists and read a few more. Checked the supper a couple of times: turned the wedges, added some water to the chicken dish, removed the soya beans from the stove.

6.00 - Checked the supper again, found frozen broad beans to put in the microwave. Asked Tim to set the table and cook some courgettes (which he insists he does much better than I do! We stir-fry them in slices in olive oil) Dan and Tim were discussing some complicated music theory thing about augmented sevenths or major sixths... I think part of the reason Tim struggles hugely with fractions in maths is that he intuitively thinks of a seventh as being bigger than a sixth, and a sixth bigger than a fifth, etc - which they are in music.

Phoned Richard when he wasn't back by 6.15; we eventually got the food on the table by about 6.20 and Richard came in just as we were starting. Evening meals are never as relaxed as lunchtime since usually someone has to rush off afterwards - this time it was Dan going to a rehearsal at seven o'clock, and Richard also had to get back to the office as he's having major server problems.

6.50 - Turned on the water heater after Dan had cleared the table, as the water hasn't been all that hot this afternoon, and went around the house closing all the shutters. Found my secateurs and little trowel which I'd left outside earlier and put them away.

7.00 Blogger is working again! So after a quick glance at email I typed up my book review. It's all working rather slowly but then I suppose a lot of people are using it now, catching up after the system being unavailable all day! Tried to change one or two of my settings but that didn't seem to work.

Uploaded all the photos I took today on the digital camera to the hard drive, and renamed them appropriately. It's not the greatest camera in the world but it's great for quick snaps outside - and inside if there's plenty of daylight - and for use online.

Had a quick glance at email and online forums - nothing of interest at present.

7.30 - Washed up from supper. The water was perfect temperature... in the middle I realised I had to bag the beans so I paused to do that, mixing the soya beans in with the mixed ones, and then dividing them into little freezer bags with about 300g cooked beans in each - that's usually about the right amount for two of us for one evening meal. I ended up with 7 small bags, so I won't have to boil any more beans for a few weeks. Also I had to pack tonights' leftovers into freezer cartons and freeze those.

Then when I'd finished the washing up, there was the oven top to tackle. Why does bean liquid ALWAYS boil over and make a horrible mess?! Of course it was worse than usual since I'd cooked potato wedges in the oven for an hour so the spilled liquid had got stuck on. Whew. It's better now. But I could scarcely believe that simply washing up, bagging beans and then cleaning the oven top took forty-five minutes...!

8.15 - Tim is playing his guitar, always a pleasant sound. Richard and Dan are still out. So I sat down to read some email and perhaps catch up on some reviews on Ciao. Then after about ten minutes he said he was going to watch an episode of All Creatures Great and Small and did I want tojoin him. Sounded like a good idea so I watched for about 45 minutes. Then Richard got home with a query about some bills which we sorted out, by which time it was 9.30.

Dan came home and suggested I read to them for a while, so I read another chapter of 'A Hat Full of Sky' by Terry Pratchett which we're all enjoying, then chatted awhile. I did a final check of email, switched off my computer, and then got into bed about 10.30pm where I read for about fifteen minutes before switching the light off... and vaguely wondering where the day had gone as despite all the lengthy detail above, I don't seem to have got a whole lot done.
Posted by Sue at 10:00

Hello Sue,
I landed up by chance through a whimsical search on fresh mangoes in Cyprus, and am I glad! Thoroughly enjoyed your posts and your book blog. Inspires me to write more.
I had been to Cyprus for a short company visit in 2010, and it was lovely, especially the Petra tou Romiou (http://mycyprusvisit.blogspot.in/2011/08/petra-tou-romiou-paphos-aphrodites.html).
Thanks, and will be back!