We had decided that Saturday would be our big day out to visit the pyramids at Giza. This was partly determined by the weather forecast: it was supposed to be 29C on Saturday, 32C on Sunday, and over 35C on Monday!

Richard spoke to one of the hotel taxi-drivers, who said he would be prepared to drive us there, wait for us, and then drive us home again in the evening, all for 150 LE (about 16 euros) which seemed like very good value. He said he would also take us to Memphis, if we wished, for another 90 LE. But when Richard spoke to one of his friends, who's something of an expert in the pyramids, he suggested we go instead to Saqqara first, an older site where there's a small museum and a ziggurat, and then on to Giza afterwards. He said it would be more interesting that way, and that we would more likely find somewhere to eat around the pyramid site!

So we set off around 8.30 and arrived at the Saqqara museum about forty minutes later: 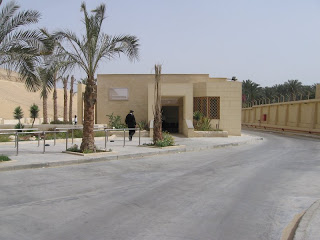 It was much smaller than the Cairo international museum, which we visited the day before, but very nicely laid out with plenty of labels and explanations. The exhibits were in glass cases, and we were able to take photos so long as we didn't use any flash. There was plenty of light, so we took quite a few. As with the Cairo museum, the jugs and bowls were in the most amazingly good condition, given their age (about 5,000 years old in some cases) : 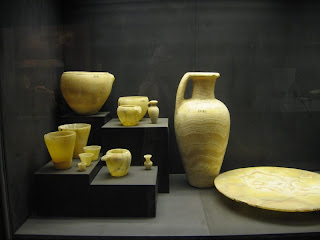 The statues were pretty stunning too: 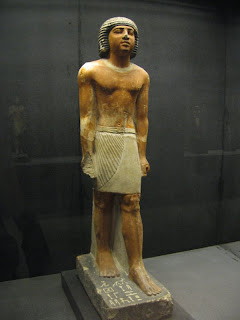 There was even a mummy in one of the cases: 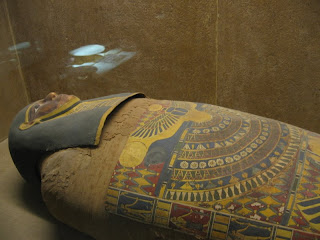 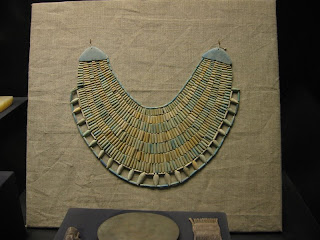 One of many tablets with hieroglyphs carved in: 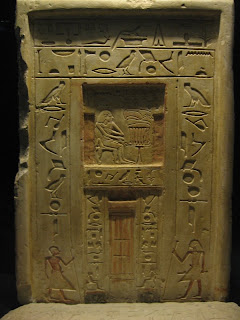 A piece of stone with some carvings of people: 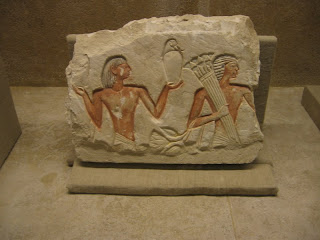 A stone statue of a high priest and his wife: 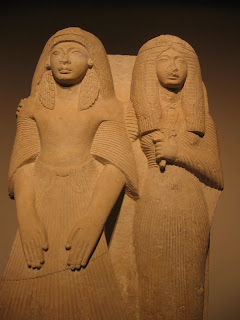 .. plus much more. I suppose we spent about 45 minutes in the museum - it cost as much as the huge international one - and then went to the outside Saqqara site, which was included in the ticket price, to see the ziggurat: 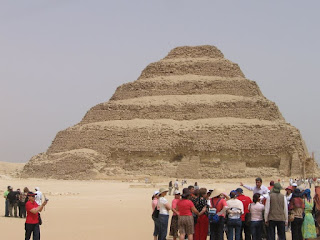 It was fairly impressive, though not as huge as I had imagined, and looked as if it were crumbling somewhat - but I suppose that's hardly surprising in the sunshine and wind of thousands of years.

Even by 11am it was getting too hot and sunny for me, so I sat in the shade to read for a bit while Richard and the boys went for a bit of a walk. They saw lots of camels: 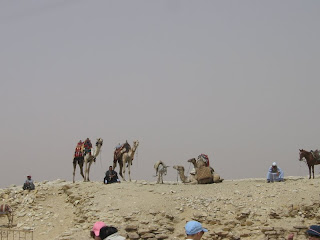 And Richard took a photo of Daniel and Tim right up against the ziggurat, so as to show its size - which is actually rather bigger than it seemed: 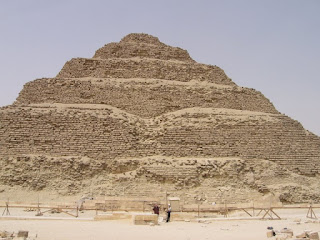 When we'd seen all there was to see, we got back in the car and were driven to Giza, about another twenty minutes away. We asked the driver where would be a good place to buy a sandwich, and he suggested KFC... since Daniel is vegetarian, we went upstairs to Pizza Hut instead. Yes, these American fast-food places get everywhere, but since some of the restaurants in Cairo are rather dodgy, we were thankful for a place with clean surroundings, good loos, and food we could trust to be properly cleaned and cooked.

So we had a light lunch, then over the road to the pyramid site. Our driver said we should really book a guide, as it wasn't very safe... but we had the feeling he was trying to give a job to one of his friends, so Richard texted his pyramid expert friend and asked if we really did need a guide. No, he assured us, it was totally safe in the pyramid complex.

The first thing that struck us as we went in was the enormity of the Sphinx: 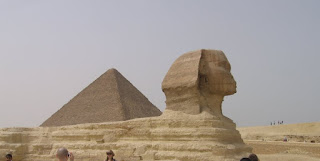 I had my camera out, and thought it would be nice to take a photo of a rather well-ornamented camel. Bad idea, muttered Daniel. They would probably charge us for it. So I was about to put my camera away, when a man came up to us, waved his hand, and said, 'No charge for photo!'

'No charge?' I said, and he agreed. So I snapped this photo. 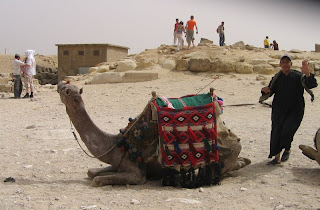 As I was about to take it, the young man lifted Dan off his feet and tried to put him ON the camel. Daniel - who is bigger and stronger - struggled and got down, insisting that he did not want to ride the camel. We had heard stories of people offered free rides on camels... and then charged large amounts to get off again! So they tried to wrap a headscarf around Richard, but by then we were rather keen to get away. Then they followed us insisting we should pay something... Richard did put a very small note into the owner's hand, but he still followed until Richard said we would call the police.

All part of the experience, I suppose. We already knew never to let our cameras out of our hands (or we would be charged to have them back again...) but I hadn't thought that just taking a photo of a camel would be such a problem.

After that we headed to the pyramids themselves - not far away, and there was a good breeze, but it was still fairly hot without much shade. I was struck at the strange mixture of ancient and modern, seeing the bus/coach park at the foot of one of the pyramids: 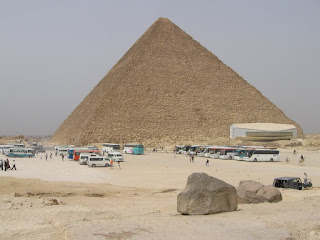 We spent nearly three hours in the complex. We decided not to go inside any of the pyramids - we had heard that it was cramped and claustrophobic, and heard one man saying he had to queue for two hours to get a ticket! - but it was interesting to walk around slowly, with frequent stops for drinks of water.

We had decided to go to the famous 'sound and light' show in the evening, but thought it best to eat beforehand... so, in the absence of anywhere else that looked even vaguely reasonable, we went back to Pizza Hut. Richard and Dan had some ice cream desserts, then we bought various mixed appetisers and some more water, and spread out our time there quite well - an hour and a half - until it was time to go to the evening show.

Daniel commented to one of the waiters that of all Pizza Huts, theirs must have the most stunning view in the world, as it looked out right over the pyramid complex: 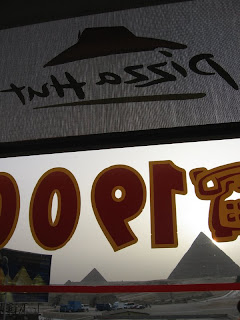 It was pretty amazing watching the sun beginning to set behind them, too: 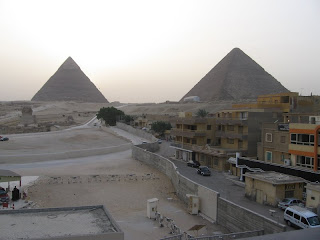 The sound and light show started at 6.30, so we went to buy our tickets half an hour earlier (75 LE each - again it would have been less for Tim if he had brought his student ID card - ah well) and went to sit in the audience, some of the first to arrive.

We had a huge surprise about five minutes after arriving, when we heard the sound of bagpipes! Then a small band marched on, dressed in ancient Egyptian clothes, playing what sounded like Irish music... 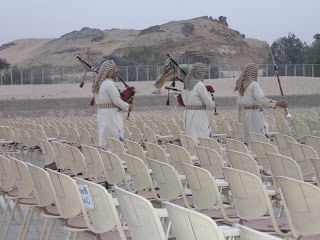 They stood at the front and entertained us for about twenty minutes, which was very pleasant even if it did feel incongruous. They were very good. 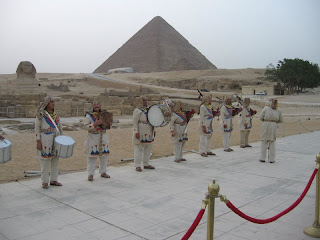 We did try to take some photos of the sound and light display itself, but alas - they didn't come out. It was very well done, by someone with a British colonial type accent, and lights that showed different parts of the pyramids (including some lasers to demonstrate the dimensions), and also some pictures on a vertical stone screen at the front of the seats. It lasted nearly an hour, telling us about the different pyramids, why they were built, how they were discovered relatively recently, what they contained, and their best guess as to how such enormous monuments could have been built before the days of mechanical equipment.

We were more than ready to get back to the hotel and collapse by the time it had finished, but it was a fascinating day. What struck me most was how incredibly advanced the Egyptian civilization was - I knew it academically, but had never seen so many finely made artefacts, or understood quite how well-organised they must have been. So strange that it was all lost for thousands of years...
Posted by Sue at 14:20

I can't believe how built up it has all become. I haven't been back to Egypt since 1984 so thanks so much for posting the pics - brought back many memories, glad you had a good time there.

That's a day worth blogging about.

Lovely pics Sue. It's a shame that there are buildings right up close to the pyramids, I've always imagined them out in the desert a bit.

BTW, you've been tagged. Check out my blog to see what to do.

I enjoyed reading your post. Nice shot of the pyramids through the Pizza Hut window, gives an interesting perspective.