The first rain of the season!

Sometimes it's as late as October. Occasionally we get a shower in August.

But this year, the first rain signalling the beginning of the end of Summer came today.

I had seen that rain was forecast for later this week. Yesterday it even forecast it for Monday. This morning, when I got up, it was decidedly cloudy. Following my intuition, I picked up my umbrella before walking to church.

Sure enough, around 9.30, I began to smell that scent that I suppose is typical of countries with a long, hot dry spell each year. It's the scent of damp air, of dust gathered from the trees and rooftops, and - perhaps - of plants and grass rejoicing. As I looked out of the side door, there was gentle rain falling. Several people were smiling, and someone offered a prayer of thanks.

It only lasted about ten minutes. But then, around 10.30 when I was walking home, I was caught in the second rain shower. It only lasted a few minutes, but I was glad of my umbrella. It's hard to capture rain as it falls, but this photo does show that the sky was cloudy rather than blue: 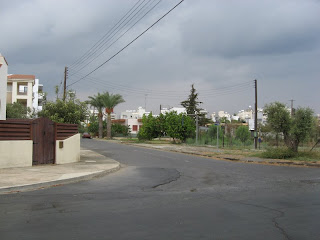 The sun came out after that, and the rain dried up. But then around 5pm this evening, there was another shower - more than a shower this time, it was heavy rain for at least fifteen minutes.

Everything looks cleaner now. And it feels a bit cooler. I do hope we have more rain this week as promised, although it won't be much fun for the two sets of visitors who are coming in the next fortnight...
Posted by Sue at 21:40

I looked at the Troodos Ski cam yesterday and it looked like low clouds/moisture etc. Don't want your guests inconvienced by rain but I know you're thankful for any rain and maybe coming early will mean a wetter winter.