A week with Tim home in Cyprus

The past week, unsurprisingly, has whizzed past. It is very good to have Tim home again, even though it's for such a short time.

It's been a very sociable week since I last posted. Thursday morning, I took Tim to meet some new friends who live just a few minutes' walk away. The three-year-old daughter took to him instantly and he was persuaded to read her a story. Thursday afternoon, he went out and about with Richard doing a few errands.

Friday morning Tim went into American Academy, a local private school where he volunteered regularly a year ago. He was, I'm told, greeted with great enthusiasm. He spent the morning there, including helping another friend set up a puppet show for their end-of-year assembly.

He got home about 1.30, just in time for a lunch with 12 people, for Richard's colleagues and their families. 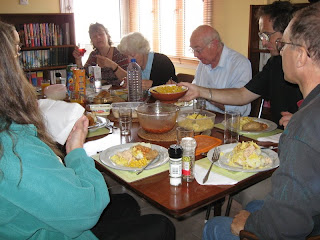 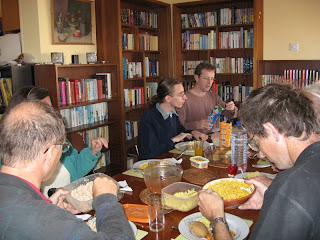 One family stayed chatting awhile afterwards, then Tim went to visit the church group for 6-11s, followed by leading a band practice for the inter-church youth band. That was followed by a pizza/souvlaki night for the youth group, plus sleepover (which of course really means 'not much sleep-over'), then Saturday games in the Salt Lake Park and lunch. He got back mid-afternoon, shattered!

Sunday morning we all went to St Helena's Church for their Easter service, since Tim was playing the piano - lots of good old hymns, and a packed building with plenty of visitors. Then we had invited some friends to lunch, where we ate the 'spare' turkey we had kept from Christmas, and - since there was one in the fridge, still - a Christmas pudding.

The friends stayed chatting till about 6pm... and once again I was extremely thankful for our dishwasher!

Monday, Richard took the day off, and spent a considerable amount of it mending the winch that brings our shopping up to the main part of the house. It involved a lot of driving around Larnaka asking for spare parts, and being directed elsewhere. Tim was very tired and didn't do very much.

In the evening, we were entertained to a delicious meal and Scrabble game by some other new friends who live nearby: 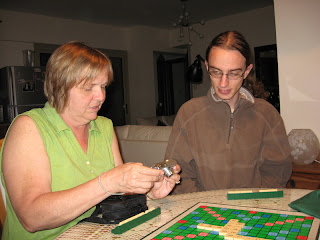 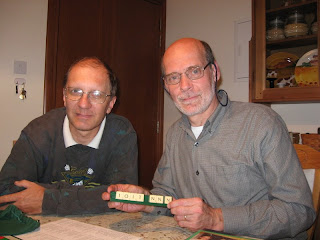 On Tuesday morning I helped at the Tots Easter party, which was enjoyable and went well, but left me totally exhausted! Tim had thought of coming too, but was so tired that he slept for most of the morning. In the afternoon, he got the downstairs studio sorted out and set up to do some recording, and in the evening he went to Lighthouse, the Christian group for international students, and caught up with yet more friends.

Wednesday morning, some of the youth band came over and spent the morning recording vocals with Tim in the studio. Richard's part-time bookkeeper came to lunch, then Tim went back with them to spend time in the office looking at some new equipment.

In the evening we went out for an excellent meal cooked by some other friends, who wanted Tim to help with various computer issues. Ironically we found that Richard could do part of what they wanted, and I could also do some of what they wanted, so Tim supervised a little and helped to mend a flute that was lying around...

And so the week disappeared.

This morning Tim got up late again, and we went out to lunch with the new friends he met for the first time last Thursday. Very enjoyable indeed.

I don't seem to have got a great deal done amidst all the busy whirl of socialising. But it's been great to have Tim with us. He's still here until Monday afternoon, but I know the next few days will go extremely quickly.
Posted by Sue at 18:09

Family and friends, what a wonderful combination.
So good to hear of happy families.
Betty G