The main reason we are in the UK at present, rather than any other time, is so that we could be with Tim for his 21st birthday. Nearly two years ago, we had to fly all the way to Malaysia to be with Daniel for his 21st (which coincided with Richard's 50th).

Tim's first comment was one of surprise at how many gifts and cards were awaiting him. Having lived in Cyprus, he's used to the vagaries of the postal service, and the tendency of some people to send parcels containing presents for us all - sometimes including Christmas ones, which would arrive any time from September until early December. But this year, having seen so many relatives recently, there was a large pile on the table: 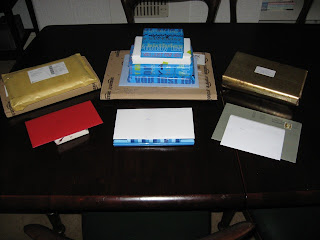 He opened cards first. Here are the ones that had arrived (though more came later): 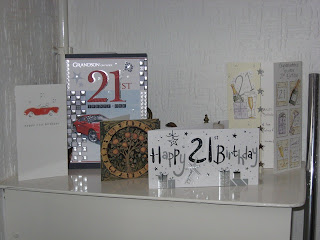 The first gift he opened was from our friends John and Heather, who are Tim's godparents. He was surprised and delighted to be given a traditional style pocket watch! He said it was something he'd always wanted, but never thought he would own. He then wondered how to wind it, and how to set it... and we realised that he has never before owned a wind-up watch! 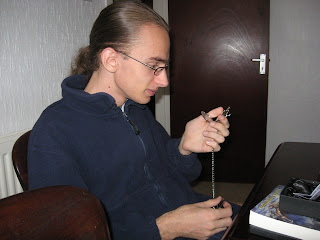 He played around with the settings on my camera to get a nice picture of the watch: 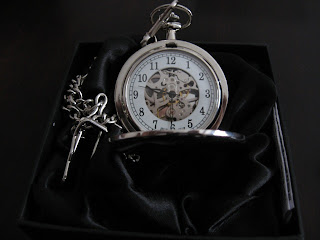 We then had to remind him to open his other parcels! These were all things bought from his 'wishlist' - but since he set it up a long time ago, and adds things to it as they occur to him, he'd quite forgotten that most of them were there.

Here are three CDs he was given, reflecting his somewhat eclectic tastes in music: 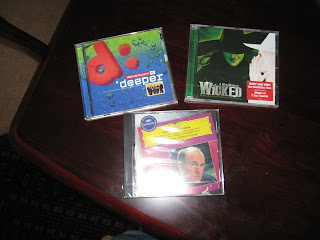 Here are the books he was given by various relatives: four fantasy fiction, and three useful books for his studies. Three generous cheques are sitting there too: 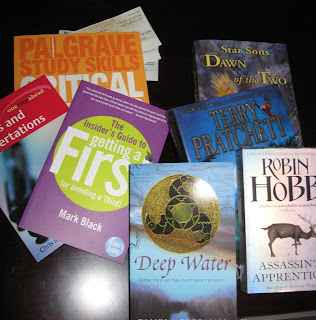 Three DVDs from his wishlist. Mr Holland's Opus is one of my favourites too. We have it in Cyprus. We haven't yet seen Mama Mia, though Tim tells us we should. But he doesn't think we'd like 8 simple rules, which is apparently an American TV series: Our one disappointment was that the present we had ordered for him had not yet arrived. He hadn't actually decided what he'd like until last Thursday, which didn't help; up until then he had been asking for a bike. Then he decided it wasn't such a good idea after all. I suggested several possibilities - since it was his 21st birthday, we wanted to mark it with something special. Eventually he agreed that he did really want a digital SLR camera, and we were able to find an older model which was much less expensive than a brand-new one, but exactly what he wanted.

We were very pleased when a courier arrived with it mid-morning, although it meant there was no chance to wrap it up. That didn't worry Tim unduly: 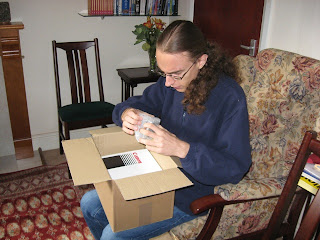 He soon sorted out the various parts that came with it, and fitted the (new) lens he had bought inexpensively from Ebay to go with it: 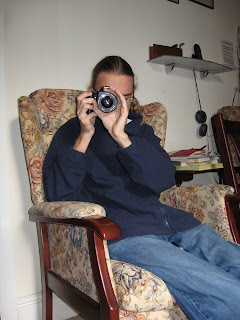 For many years Tim has been chief cake-maker in our family. I think he's made all our cakes, including his own, since he was about 13. But he's made a lot of cakes recently for family visits, and didn't feel like making one this year. So it was up to me. Thankfully it turned out all right: 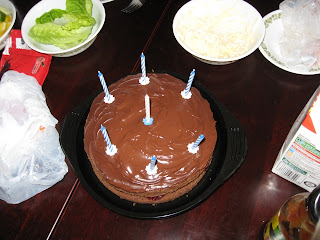 I had bought a pack of 24 candles, but six of them were pink and Tim really does not appreciate pink. So I just put on seven: one for each three years of his life.

In the evening he'd asked if we could take out a few of his closest friends to an Indian restaurant. Two of them were unable to make it, so there were just eight of us: 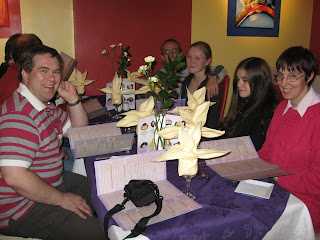 We had a very good evening, with excellent - and very filling - food.

As a final picture, this is Tim with his best friend, who has recently become his girlfriend, Jo: 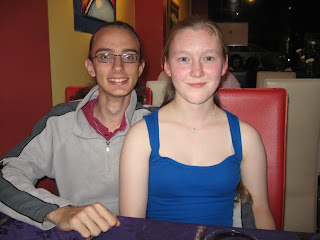 So, I am now officially the mother of two adults.
Posted by Sue at 17:51

Happy 21st Tim - sorry two days late. It looks as though you had a good celebration to mark the day.

Bad luck Sue - time can't be regained. You've been the mother of two adults since Tim was 18!!

Your blog is nice.Thanks for opening this blog. My blog is about
Online Newspaper Site

your blog is good. Very good in the way of writtings and photos.

Happy 21st birthday to you.

We have lot of free greeting cards in our collection. Please feel free to send it for 21st birthday.