Near the end of our time out of Cyprus: Sussex park and Downs

A couple of days after Tim's birthday, Richard and I went by train to Sussex, to stay with his mother. Some friends who used to live in Cyprus got in touch, and suggested they might come and see us on the Saturday.

So we found a local place that would rent us a car for the day, and met them at Haywards Heath station. We didn't want to do anything too energetic, and it was a lovely day... one of many while we were in England! - so we drove to the municipal park and had a short walk, while chatting and catching up with our friends. 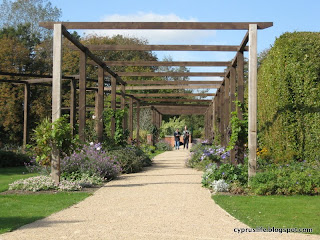 The park was at the back of a pleasant Harvester restaurant - one of a national UK chain which we'd heard highly recommended. 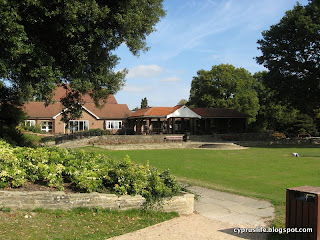 So we had our lunch there. Very good value it was, too, with excellent food; I particularly liked the unlimited free salad, in many varieties, that goes with any main meal.

Then we decided to drive to the Downs, since our friends had not been there before. We drove up to a place known as Devil's Dyke, and enjoyed the views: 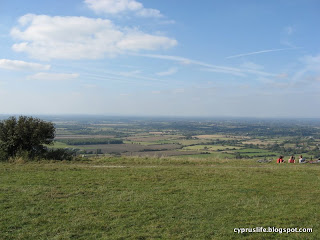 We were surprised at how many other people were there. But I suppose a warm, sunny Saturday at the end of September is unusual enough to attract crowds. 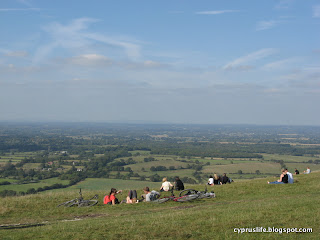 That probably doesn't look like many people. I didn't take a photo of the pub nearby, which was packed. People were sitting inside and out, and the queue (just to get some coffee) was snaking right through. It took about 15 minutes to get to the front - and even then they got the order wrong initially.

After our coffee, we went outside again and watched some hang-gliders taking off: 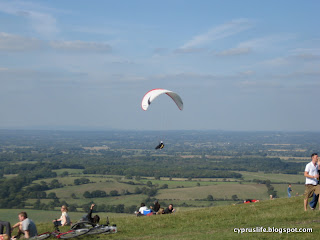 Email ThisBlogThis!Share to TwitterShare to FacebookShare to Pinterest
Labels: England

Hi Sue! I love your country England and where you live at, Cyprus. :) But your homeland, England is the country I love the most, those beautiful nature and greens! Really nice pics there.