There are those who assume that Cyprus is still a developing country. Or at least that it's fifty years or so out of date. People are often surprised to find that we have broadband internet, mostly good (and very inexpensive) mobile telephony, online banking and fewer power cuts than some parts of the UK. OK so there's no mains gas, the sewage system is still rather antiquated, and things rarely start on time. There's no grocery shopping on the Internet, and it's still very much a patriarchal society.

Many Cypriots employ 'maids' - often from Asian countries, who can earn more here than they can back home. Unfortunately some of them are not treated very well. We don't have the inclination, or the room, or the funding to employ someone to do the shopping, cleaning and cooking, no matter how tempting it might sometimes seem in hot weather.

But I do have a little army of servants in my kitchen, whom I instruct in the mornings and at other random times of day. Sometimes before 9am I have thanked the dishwasher for cleaning yesterday's dishes, told the washing machine to clean another set of clothes, instructed the juicer to make us some nutritional fresh juice for breakfast, informed the coffee machine that I need some coffee to take to Richard, set the breadmaker off to bake us some bread for lunch, and started the yogurt maker with another batch to be ready by the evening. I will have used the fridge several times without even thinking about it, and quite likely the kettle too. A couple of years ago we added a slow-cooker to the kitchen servants, and until recently I might well have arranged for that to be gently simmering away all day too: 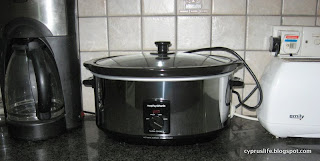 And of course I rely totally on my computer to keep in touch with family and friends, store and organise my photographs, and write my blogs.

So yes, we have just about all mod-cons available in Cyprus.

And just like the rest of Europe, they don't seem to last. Unlike the old twin-tub washing machines that probably kept running for thirty or forty years, modern appliances seem to start wearing out after a year or two. Four years is considered a good life; seven outstanding.

I was mildly annoyed, a week or two ago, when my USB hub suddenly stopped working. I don't think it was even four years old; Tim bought it for me a while ago - so it may have been three and a half years old. It's done good service, in use constantly. Daniel and Richard told me it wasn't mendable, so Richard bought and set up a new one.

I wouldn't have thought anything more about it, until Daniel pointed out that the 'enter' key on my keyboard was broken. I hadn't noticed, but it was indeed rather wobbly. If I wasn't careful, it fell off completely:

But the keyboard was working fine, other than that, even if most of the letters had been rubbed off through constant use. I've had that keyboard for over five years, so it's done very well.

More worrying was to notice a crack running right the way through the crockpot part of the slow-cooker: 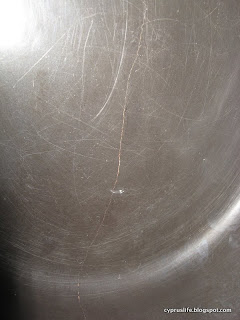 I spotted it last time I used it, after seeing that some liquid from the casserole I made had leaked out. The crockpot still felt fairly firm, but I had visions of Richard lifting a heavy chili out of the slow-cooker only to have the crockpot fall into two pieces dumping a lot of hot food down his front and all over the floor. It wasn't worth the risk. And although it's only about two years old, we bought it in Nicosia, and I very much doubt if a crack like that would be covered under the guarantee. I probably used something too cold in it. Or if I didn't, the company would say I probably did.

So I stopped using the slow cooker.

Then the electric kettle stopped working. It happened first a few weeks ago, when Daniel accidentally switched it on empty. Richard took it to pieces, determined that it wasn't mendable, put it back together... and found that it worked. 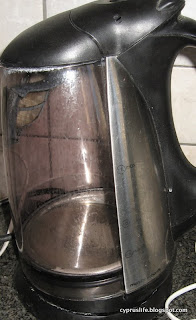 But the same thing happened (my fault this time) last week, and it didn't seem worth taking apart yet again. The kettle was over four years old, and thus probably on its last legs. Thankfully we had a whistling kettle that sits on the stove, which Tim gave me, so we used that instead. Slower, but worked perfectly well.

Then on Sunday, Daniel was cleaning the pyrex jug of the coffee-maker (four years old) and a piece of it broke out of the side: 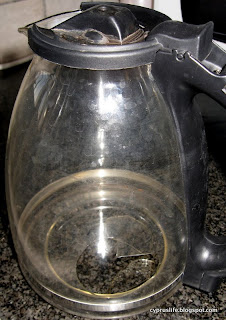 Neither Daniel nor Richard will drink instant coffee unless they have no alternative; but we have a cafetiere as well, so it wasn't a huge disaster. However that only makes about two cups at a time, and we frequently have to make more coffee than that. Sometimes we have to make some regular coffee and de-caff in an evening.

Yesterday, I was doing our accounts, as I usually do on Monday. And noticed that we still have quite a lot of money in our virtual 'family gifts' account - where we put money given to us jointly at Christmas or other occasions, so that it doesn't end up used for everyday items.

While we hate throwing out appliances, it does seem that they are disposable. There was no point keeping a broken kettle, coffee maker and slow cooker in the kitchen just taking up space. So I tentatively suggested that we might at least see what was available to replace one or more of these items.

After much discussion, we went to the big Orphanides. There were a surprising number of filter coffee machines, at a wide variety of prices. Neither of us is at all good at making decisions. It was easy to reject the very expensive ones, and the ugly ones, and the white plasticky looking machines. We narrowed it down to three possibilities quite quickly. Eventually Richard chose this Krups machine, since he knew it was a good brand: 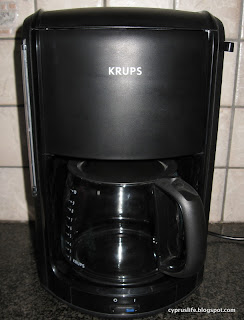 While he was making the final decision, I wandered around the electrical department, and saw that they had slow cookers. They had the 6.5 litre size, which we bought before since it was the only one we could find anywhere in Cyprus. They also had the 3.5 litre size, which is what we had actually intended to buy a couple of years ago. The price wasn't too bad - so we decided we would get one of those too: 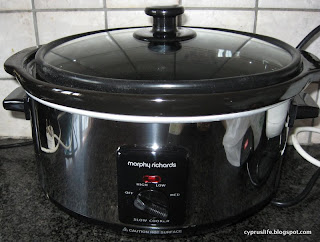 Then we looked at kettles. Oh my - so much choice. We quickly rejected the ones with plastic sides as I don't like the smell of the water boiled in most of those. I'd quite have liked one with glass sides, like the one we had before, but there weren't any. So we looked at several made of metal... and eventually chose this one, mainly based on its price: 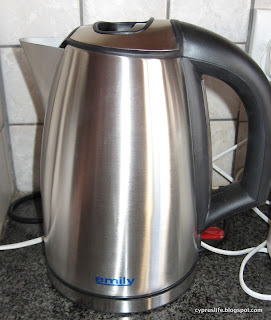 I hate spending so much money all at once. But at least we didn't have to pay for the repair when our blender went wrong recently.

So... we were about to pay for these three items when I remembered my keyboard. Daniel reckons that supermarkets are the best place to buy keyboards and mice, as they're much better value than computer shops. Orhpanides had four different keyboards, all of them suitable for my needs, ranging from 15.99 euros to 19.99. I liked the most expensive one best. My instinct was to buy the cheapest... and yet, there was only a five euro difference between the two. And I do a lot of typing.

So - with a little persuasion from Richard - I chose this one:

... and we made our purchases. A moving-in anniversary present to our house.
Posted by Sue at 14:38

Congratulations on the new purchases.

We have the same slow cooker and wouldn't be without it, particularly with the current heat. Honey & mustard glazed ham cooked in apple tomorrow :-)

Happy Anniversary.....I remember finding your blog soon after we returned from Cyprus in '06. We had met Tim at Rocky Point.....Thank you for your faithfulness in your blogging. With our mutual friends your writing helps keep me very tied to Cyprus and all of you. Enjoy all your new conveniences.

Why do you feel guilty about buying necessities?

We live in a throw away world unfortunately.

I've just replaced a tumble dryer and dishwasher, luckily one was covered by insurance. I have a slow cooker at the back of the cupboard somewhere. Your post has reminded me to dig it out. Does great Kleftiko!! Stick a few lamb shanks in with bay leaves and potatoes. Let it do it's thing for 8 hours, voila!!

Thanks for the congrats.. hard to believe we've been here four years already.

Why guilty? I suppose it's my belief in being frugal, the fact that money is always limited and new appliances weren't in my budget. Or maybe the Scottish in my blood... ;-)

Would love to make kleftiko but alas have not been able to find lamb shanks in Cyprus.

We seem to go through electric kettles at an alarming rate. If they are not breaking, people are breaking in and stealing them.

But our Speed Queen Automatic washing machine we have had for ... let me see now... 20 years come November. It cost R1700 when we bought it, and was the most robust-looking on the showroom floor. And I've seen them in laundromats. It's lost a bit of it's enamel in places, but has lasted well.