A few more additions to our house...

In this, the tenth anniversary of our selling our UK house and buying one in Cyprus, we have done a LOT of renovations and repairs. Some of them should really have been done years ago, including repairing some of our rotting windowsills and frames, but we're not very good at making decisions or at getting around to this kind of thing.

So we started by employing a teenage friend to some painting, and he did such a good job that he's done a great deal of sanding, repairing and more painting, and even some plastering.

In the middle of that, we had a damp-proof course installed. While it's still early days, and hard to tell now that the weather's warmer, we do think our guest flat seems to smell less damp and the kitchen and bathroom cupboards are a lot less musty.

Then we did the most major work of all, having our bathroom renovated. I'm still glad I was out of the country while that was going on, and am very much appreciating the new bathroom. It was basically complete about a month ago, but since then we've done a few extra bits and pieces - I bought a wooden toilet-roll holder in the UK, and Richard put that in.

We replaced the bathroom bin and loo-brush holder, both of which were ancient, and even bought some new scales when Lidl had some on special offer.

We spent a lot of time looking for towels, either in cream or peach, but couldn't find any at all despite searching in several shops locally.  The towels we had been using were ten years old and getting rather scruffy as well as having lost any hint of fluffiness. They were cheap ones and served us well, but having spent a significant amount on the new bathroom, we thought it deserved new towels.

We also realised that there was a bit of a gap in the corner next to the toilet, and that we needed somewhere to store toilet rolls. So after much pondering, we decided to buy another Ikea unit, in the same range as our sink cabinet and mirror.

The shelf in the middle clearly needed a plant, so we spent ages looking for one that would survive in partial shade and would not need too much attention, and are happy to report that, four weeks later, it's not just alive but has some new leaves: 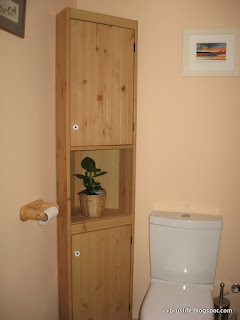 Any time we go to Ikea - which is just outside Nicosia - we seem to find several other things we weren't expecting to buy... and in this particular trip, we found some rather nice brown towels, both large bath sheets and some hand towels that would fit perfectly on our towel rail... 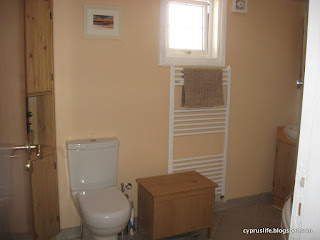 ... and even a matching bathmat. 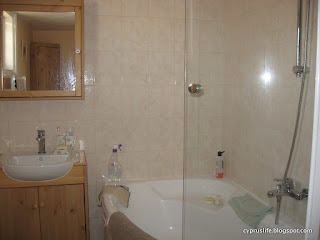 Bathroom complete, we didn't want to do anything else major, but we realised we had a new problem. For the last few years we have used an upright fan in our bedroom overnight, from about May through to October.  In the hottest weather, when the humidity is high, we use our air conditioning too, but right now the heat is dry, and a fan is all we need.

The trouble with the fan was that in order for it to be effective, it had to be in a place where Richard tripped over it or bumped into it almost every night. So he thought about affixing a wall fan in a corner, out of the way. I don't think wall fans look particularly nice and didn't know if it would work well enough, so for a few days recently we put the upright fan on top of the chest-of-drawers, and angled it with a couple of books underneath... far from ideal.

The obvious solution is one we had thought about ten years ago... a ceiling fan. We even bought one at Kleima, but it had the wrong kind of fitting so ended up in our guest flat. We had thought that nice ceiling fans, such as we have in our living areas (bought second-hand just before we moved in, from friends leaving the island) would be very expensive new.

But Leroy Merlin, a big hardware/DIY store in Nicosia (not far from Ikea) sells ceiling fans at very reasonable prices. So we went there yesterday, and bought ourselves a ceiling fan, of very similar style to our others. It's perhaps twice the price of an upright fan, but the ones we have elsewhere have lasted well over ten years, whereas upright ones tend to stop working after three or four.

Richard and Tim, between them, put the ceiling fan up yesterday afternoon.... 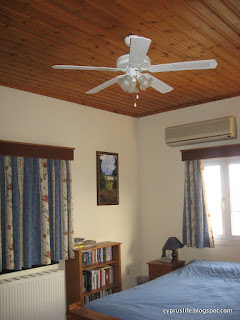 I think it looks good - and more importantly, it was absolutely wonderful overnight. I felt pleasantly cool, Richard even complained of being cold this morning.

As I write this, the ceiling fan in my study is on, providing a pleasant breeze; they are wonderful inventions, and I am so thankful we now have one upstairs too.
Posted by Sue at 20:12