At the end of my previous post about life in Cyprus, I mentioned that our cats Alexander the Great and Lady Jane Grey are getting along well these days. Life, we thought, had calmed down, and they were in a pleasant routine. Cats are usually fairly low maintenance, in our experience, and so long as I remembered to feed them and put them to bed at the times Jane considers appropriate, all was well.

I also mentioned in that post that I was given an unexpected and gorgeous bouquet on Mothering Sunday. It lasted almost perfectly for its first week, and thankfully the cats ignored it.

After about eight days, I removed a few of the bigger blooms which were well past their best, and trimmed the stems slightly, and it did very well for another week. Last Sunday, I removed the rest of the bigger flowers and the supporting foliage, which was going brown. But there were several of the carnations which had emerged from buds and were still looking fresh. Impressive after two weeks, I thought. So I trimmed them some more, and put them in a smaller vase, back on the table in our living room.

However, the cats suddenly noticed them. First Alex knocked the whole thing over so he could drink some of the water.

Then Jane decided that the flowers should be destroyed: 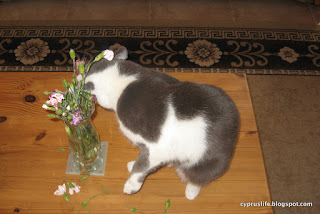 I kept removing her, and she kept returning.  She was determined to bite off as many of the flower heads as she could. Cats usually know what they can and can't eat, so I wasn't too worried about her, but it was rather sad from the point of view of my flowers: 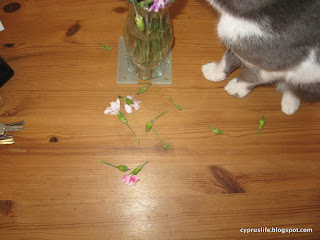 Half an hour later, she brought up a hairball, accompanied by what was evidently several pieces of carnation stem. And we both realised that whereas outdoor cats will eat grass to help them throw up, when they have to, Jane - being an indoor cat - doesn't get that opportunity.  I'm not sure what they would normally do, but she evidently seized her chance and it worked.

Two days later, Jane decided to escape. She hasn't shown much interest in going outside, though she'll sit and chatter at birds for hours, and loves being on our upstairs balcony.  Alex pops in and out but she's shown no inclination to follow him. Until Wednesday, when she darted through my legs as I was letting Alex in by my study door, and then - followed by Alex - down our outside stairs and into the street.

This was at about 6.30am and there wasn't much traffic about, but I didn't want her escaping, nor Alex showing her around the neighbourhood. So I waited for her to come out from under our van... and missed, as she raced across the patio and under a neighbour's car. She's a quick mover. Alex kept trying to persuade her to take off down the street, but she's quite a nervous cat and didn't look as if she were enjoying her adventure much.

It probably took about fifteen minutes before I finally managed to grab her and get her back indoors again. Since then she's pushed at the cat flaps a few times (we keep them on the inwards-only setting) but hasn't tried to escape. Perhaps she's biding her time.

The two aren't nearly as close as Alex was to his other sister, but they spent some time snuggling on the beanbag this week: 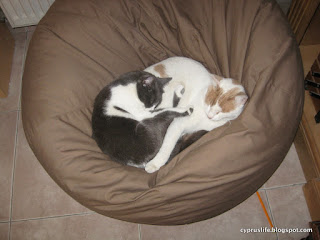 Then on Friday we had another scare.  Jane had been hassling me for wet food for about half an hour, so I got up to feed them, only to find Alex lying on his side on the floor, breathing rapidly, and panting. He got up and walked a few steps and collapsed again.  He looked and sounded very miserable, and seemed unable to get up, so we phoned the vet, who said to bring him in at once.

We were both afraid we might lose him on the way there; he was lethargic, still panting, and not complaining at all about being in the car. However, to our astonishment, as we carried him into the vet's, he appeared to recover.  By the time she examined him, there didn't seem to be anything wrong. His temperature was a little low, and I thought his tongue looked rather blue, but she said his heart rate and eyes and everything else were fine.

Since he'd also had some apparent digestive upset, she gave us some gastro-intestinal food for a few days, and said to keep him indoors until after the long Easter weekend. She told us to call her mobile number if it happened again; she said she could have done blood tests, but she didn't think it worthwhile. Most of the possible ailments connected with his symptoms were those of much older cats, and she thought it unlikely that he'd had a sudden asthma attack when we said that we don't smoke, don't use scented candles, don't have indoor gas heaters, and don't use air fresheners!

It was much later in the day, with Alex pretty much recovered, when we discovered that some visitors had been giving Alex milk to drink.  We don't use dairy products; Richard is somewhat intolerant, and I don't much like them.  We already knew that Jane's digestion cannot cope even with yogurt, and that their mother is also intolerant of milk, so it's not something Alex had ever had.

We'll probably never know for certain, but milk is a common trigger for asthma. And Alex does, from time to time, cough without bringing anything up. It doesn't distress him and doesn't last long, but having now done some research, it's exactly the way that asthmatic cats cough.

He's been absolutely fine since returning from the vet, and not too upset at our not letting him go out. His favourite sleeping place is on our bed, pretending to be a throw cushion: 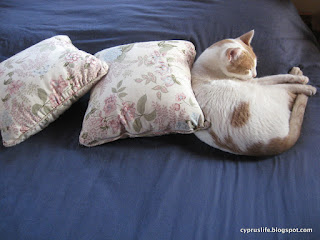 I'm so glad your cats are OK!