There seem to be a lot of public holidays in Cyprus, many of which feature parades, with chosen school students and Scouting groups marching around the town. In past years, when our son Daniel was in the Municipal Band, we used to go and watch; but one parade is much like another. With no special person to watch, the parades held little interest after we had seen a few.

Greek Independence Day
There are two national days celebrated in Cyprus, exactly a week apart. The first is Greek Independence Day, on March 25th.  It's related to the Greeks rising up against the occupying Ottoman empire back in the 1800s, but also, a little confusingly, is connected with the Feast of the Anunciation, nine months before Christmas.

Bunting is put up in the streets, and roads are cleared on the day so that the parades can take place. 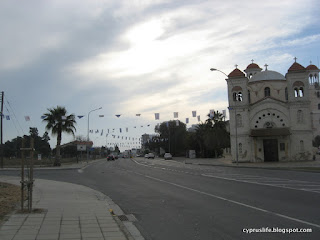 Whereas Greek Independence Day is a public holiday if it occurs on a weekday, there's no extra day in lieu if, as happened this year, it falls at the weekend.

Clock-changing Day
March 25th was also the date when clocks had to be put forward for summer time, or daylight savings, or whatever other variation you call it. I very much like the 'spring forward' change. The evenings are lighter - it's now not dark until well past 7.00pm - and it's still pleasantly cool for walking with my friend Sheila at 7.00am.  Ideally we start out half an hour earlier than that, but the disadvantage of the clock change is that I wake later for at least a week or two.

Mothering Sunday
Not to be confused with US 'Mother's Day', Mothering Sunday is always three weeks before Easter. So this year it fell on March 26th. The origins are uncertain, although I gather it existed before the Reformation. In the 19th century it seems to have been the day when girls 'in service' in the UK were able to go home to their 'mother church' - and, I assume, their families - before the busy Easter period.

However, in the middle of the 20th century it became popular as a day to give cards or flowers to mothers. It's not something that was part of my culture growing up; my mother didn't like it, and it was nowhere near such a big thing as it is now.

When my sons were small they made cards or crafts of some kind at school. But then we moved to Cyprus when they were 9 and 11. It's not celebrated here (although Cyprus has a low-key variation of Mother's Day early in May) and none of us ever remembered it. Sometimes there would be a mention at a church service; occasionally flowers were given, or crafts made in Sunday school.

I went to the local Anglican church this year, forgetting that it was Mothering Sunday. Little posies were given to everyone in the congregation - men as well as women - so I was happy to put this in water when I arrived home: 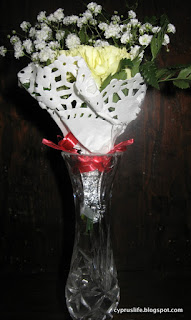 A couple of hours later, a knock at the front door revealed my friend Sheila's 17-year-old son, with a bouquet, from my son Tim in the UK: 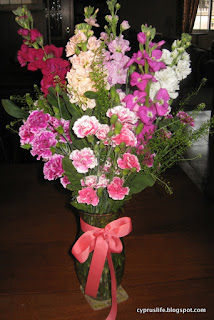 I was overwhelmed!  Tim is now a teacher, at a school where Mothering Sunday is mentioned regularly, so he said that helped him to remember.

Jam-making Day
Three days later I went out to the fruit shop, and popped over to look at the connected stall, where they sell large crates of fruit or vegetables at excellent prices. The big crates are far more than we can use, but they often have excess produce, or items past their best (or at the peak of ripeness) for just a euro or two.

I spotted some strawberries; in the fruit shop itself they're about €1.50 for 500g, and I'd bought a couple of punnets a few weeks earlier.  A small crate, which looked as if it had at least a couple of kilogrammes in it, was €4. I bought them, and was pleased to discover, on weighing them, that there were three and a half kg in all.  Excellent value.  They were perfectly ripe, and I knew wouldn't keep much longer, so Wednesday, unexpectedly, was my strawberry jam-making day: 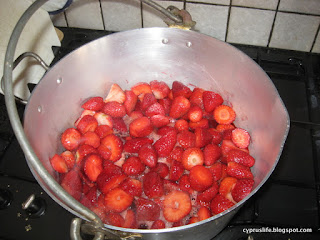 A little over 2kg went into making eight jars of jam, and I pureed and froze most of the rest, keeping a few to eat.

Wednesday was also the day that the UK Prime Minister formally triggered the 'Brexit' process. I was surprised how very sad it made me feel; we knew it was coming, after all, although I had temporarily forgotten while making jam. Nobody knows what agreements will happen, if any, or how things will work out for Brits abroad, and other Europeans in the UK. All we can do is wait and see, hoping and praying that something positive might emerge.

Cyprus National Day
Much of the world knows April 1st as April Fool's Day, and indeed there were pranks on Facebook, and on some of the news websites. It's a bit difficult to know what's true these days anyway; so many sites offer 'fake' news, or exaggerations, or speculations which may never happen. And some news stories which are genuine are quite bizarre.

However, April 1st is another public holiday in Cyprus, exactly a week after Greek Independence Day. It celebrates the start of the uprising of the Cypriots against the occupying British, back in 1955. When we used to watch our son marching with the band, we would sometimes be asked by locals if we knew what the day was about. They thought it a bit odd that we would be out there watching!

Kittens' Birthday
And finally, April 4th. Until three years ago, I only knew this as my brother-in-law's birthday; indeed, I didn't take much notice of the date when Sheila's cat Conny gave birth to kittens back in 2014.  But four months later we adopted Alexander the Great and Joan of Arc, and Tim, who was living in Cyprus at the time, adopted Lady Jane Grey. Sadly we lost Joan a little over a year ago, but then we adopted Jane when Tim moved back to the UK.

At first Jane was terrified and we wondered if the two would ever get along, but now, at the mature age of three (and really no longer kittens, but we still think of them that way) they get along very well: 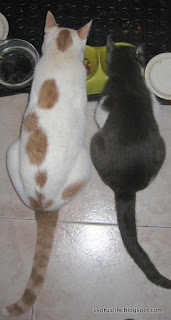