Summer arrived in Cyprus about ten days ago.

I wrote back in March about the long, wet winter which we've experienced over the past six months or so. During April, rain continued off and on, and it stayed relatively cool. We used our double-thickness duvet at night for longer than I can ever remember using it in previous years.

In the last ten days of April, it warmed up a little, and the sun came out most of the time, which was good as we had friends staying.  Around that time I switched to our medium thickness duvet, and put the thinner part away, temporarily.  I started wearing lighter jackets, or only one sweater rather than two.

On May 4th, I switched to the thin (4.5 tog) duvet. I kept the warmer one out for a week in case we needed it, but we didn't.  We started using our ceiling fans. We stopped wearing sweatshirts or sweaters of any kind during the daytime.  I started thinking about finding my shorts...

We went out for evening walks, three times one week. It was that short period of the year when it's cool enough for me, and yet not too chilly for Richard.

On May 13th, Summer arrived.  The daytime temperature reached 30 degrees Celsius.  Richard told me we needed to go out for ice creams in the afternoon, once it had cooled slightly. It seemed like a good idea to me, and he announced that it was a tradition. A new one, which we were starting this year. 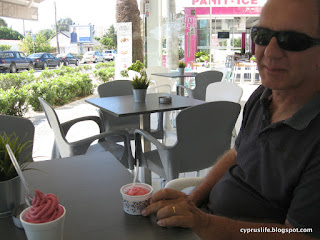 He had the strawberry sorbet, and it was very good. I decided to splash out and asked for the raspberry yogurt ice cream. I was a little shocked to find it almost three times the price of the single scoop of strawberry sorbet, but it was over twice the size. And it was excellent.

Last Saturday I decided we didn't need a duvet at all. We had only used the thin one for two weeks, and it was already feeling too warm.  I remembered that in previous years it has sometimes become very hot mid-May, then cooled a little before the full onslaught of summer, so I folded up the thin duvet, still in its cover, in case we needed it.

On Monday we had our air conditioners serviced. The last time we had them properly serviced was three years ago; in the intervening years we have cleaned them ourselves, but they are supposed to be professionally serviced and cleaned every two to three years.

We have eleven air conditioners in all.  Three upstairs in the bedrooms (one of which is Richard's study); a large one in our living room, one in my study, one in our kitchen, one in the dining room area, and four in our guest flat on the ground floor.

We also have a very nervous cat. Lady Jane Grey was not living here three years ago, and our other cats were all accustomed to going in and out of the house.  Jane is an indoor cat only.  She also finds workmen of any kind to be terrifying.

The workmen arrived when they said they would, which is unusual in this country. They said they would start on the top floor, so I shut Lady Jane in my study with me. Alex, our more sociable and relaxed cat, went to see what was going on and followed the workmen around.  Jane looked a bit askance at the noise, but everything was fine until one of the workmen opened the study door and looked in.  He apologised and closed it again quickly, but I realised they needed to clean the air conditioners on the main floor.

This is what some of their cleaning equipment looks like: 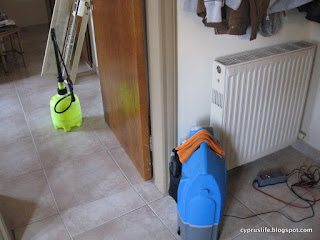 And this is the trough thing they put below each air conditioner while they pump fluid in, to catch the dirt.  It's a surprisingly non-messy process, although some of the liquid that came out was very dirty. 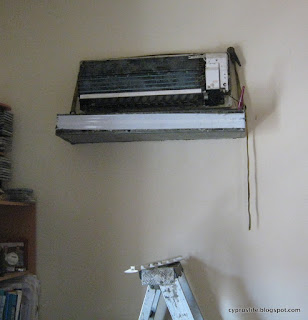 I picked Jane up, planning to go with her to what was Tim's room upstairs, until my study was safe again. She was not happy, and my arm got quite badly scratched, but we reached the sanctuary and I put her down.

Unfortunately some of the workmen's' equipment was still in the room. And the door was opened, and Jane flew out. I use the word advisedly... she runs so fast it seems as if she is flying sometimes. She raced downstairs, behind the sofa, under chairs, behind the TV... there was no way to catch her.  I got distracted by something else then when I tried to find her, she had vanished.

To my horror, I saw that one of the workmen had opened the outside door in my study, to make a phone call.

Would Jane have rushed outside...?  We didn't think it likely, but when we searched the house she was nowhere to be found. We looked in every hiding place she has previously used, and called her...to no avail. We looked outside too, in our side yard, and under the van (where she has gone on previous occasions when she has escaped) - no sign.  I sat outside for a while while the work went on in my study, but she didn't reappear.

When the main floor was finished, and the men went down to clean the last few air conditioners in our guest flat, I went around closing all the windows that had been opened, and calling for Jane.  We thought she must have hidden somewhere but could not think where. Eventually  I went out on our upstairs balcony, wondering if she had hidden on the neighbour's roof, and called....

... and Jane came strolling out, greeting me in her chirpy way, stretching as if she had been having a relaxing sleep.

I was SO relieved.  But very puzzled as to where she might have slept.

This might have remained an unsolved mystery, but a couple of hours later, when the workmen had left, I heard Jane calling.  She sounded as if she wanted something.  It happened again, so I went to look for her. Once again, I could not find her, but could hear her voice.

I noticed that Alex had knocked the thin duvet in its cover down from the place where it had been, and that he was batting at it.  I looked a bit more closely.... and realised that the duvet was batting back.  Something was inside the cover....

Hoping it was not something unpleasant, I gently probed around, and sure enough, there was Jane.  She had somehow got lost in the folds, or perhaps confused when it fell down.  So we're pretty certain that's where she hid earlier in the day - probably just a little way in, where she could sleep in comfort.

As for the air conditioners: the men told us that yes, they were quite dirty, but not bad for three years, only what was expected. None of them was mouldy or disgusting, and one of them in the guest flat was so clean that it didn't need any servicing.

However, the one in the guest flat front bedroom, which was the worst of all last time, gave up completely.  It tripped the electricity several times when they tried to service it, and they eventually realised that the compressor was dead.  It was one of the older units in the house, thus much better to buy a new, more efficient one than pay as much (if not more) to replace the compressor.

We were only charged for the servicing of nine air conditioners rather than eleven, even though they had spent a considerable amount of time on the one we had to replace.

We went out later, checked a couple of shops, and ordered a new air conditioner from our favourite white goods shop.  It should be installed tomorrow.

Meanwhile, the temperature still hovers at around 26-30C in the daytime, so we haven't yet had to use any of the air conditioners.  We usually try to hold out until at least June.
Posted by Sue at 18:29