I had hoped to write, today, about the new restrictions that are expected in Cyprus for the next few weeks. The experts met on Monday; they have apparently agreed that stricter measures are needed, with new positive Covid figures between 150 and 200 per day over the past week. But nobody knows exactly what restrictions are going to be introduced, nor for how long.

The papers had said that the cabinet would meet this morning, but today they're saying that it will be this evening, at 6.30pm, and that the Cyprus President will give a speech to the nation around 8.30pm. The last few times we've had increased measures, there hasn't been an official speech - so we're guessing it's going to be fairly serious. Either that, or an emotional appeal to the public to take the restrictions seriously in the hope that we can celebrate together over Christmas.

So that will probably be the subject of tomorrow's post.  Of course there's a significant election happening the other side of the world, which I'm keeping half an eye on, but I don't generally write political posts. And there's nothing anyone can do about that, other than pray.

But something else happened today, something of little significance in most of the world, but very important here in Larnaka.

It rained. For the first time since the end of April.

It was only for about five minutes at first. There were spots of rain on the carport roofs outside: 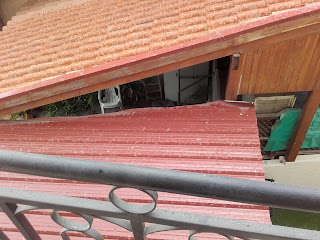 I could smell the petrichor permeating through the open windows. But unlike early rain when it comes in September, there was no immediate rise in humidity. A few minutes later it rained a little more heavily.  The road turned a darker grey, the outside roofs were wet all over. 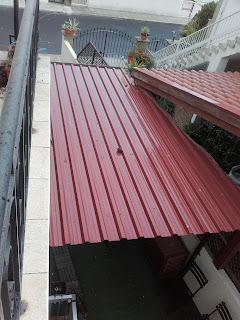 And then a third time before the sun came out and dried it all up.
It was minimal rain here, really, although more is predicted. Apparently it was much heavier in other parts of the island, so much so that there were power cuts in some areas.
It's feeling decidedly cooler today, no more than 24 degrees in the house.  I had remembered that the weather often changes during the first week of November, although it's not usually quite such a dramatic change, as it's not, most years, still 30 degrees or more at the end of October.
But on Monday I got out my jeans for the first time, and was comfortable wearing them all day.  On Tuesday I wore long walking trousers rather than shorts for the Salt Lake walk, and if I felt a tad warm by the time we'd finished, it certainly wasn't uncomfortably so. I've put my shorts away now.
I've been using the oven again since early October, and drinking hot coffee in the mornings for a couple of weeks, rather than frappés.  But I still mostly wanted a frappé at lunch-time, right up to yesterday.  Today, in the aftermath of the rain, I realised I needed hot coffee, and that I wasn't remotely inclined to have a frappé. So the frappé-maker has gone away in the cupboard for the next six months.
The forecast, at least from my point of view, looks good for the next ten days or so: 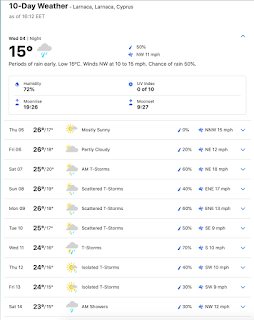 I might even get out a light jacket for the evening, and for walking first thing tomorrow.
Posted by Sue at 16:32